Controversy erupted on the convention floor when a dispute broke out over whether to seat the delegates of presidential candidate Rep. Ron Paul of Texas. Part of Maine’s delegation stormed off the floor in protest of a decision to strip away half of Paul’s delegates. Supportive members of other delegations rose to their feet and hollered their objections, angered by new rules that they say they will make it harder for grassroots candidates to stand a chance in future elections. Democracy Now! producer Deena Guzder was on the scene and filed this report. [includes rush transcript]

NERMEEN SHAIKH: We turn now to a major eruption of fury at the Republican National Convention on Tuesday as the formal nomination process got underway. Part of Maine’s delegation stormed off the floor in protest against a decision to strip away half of the state’s Ron Paul delegates. Supportive members of other delegations rose to their feet and hollered their objections, angered by new rules that they say will make it harder for grassroots candidates to stand a chance in future elections. Although Paul won some caucuses, he did not win the popular vote in a single state primary. His ardent followers used seldom-evoked state party rules to garner 20 of Maine’s 24 spots.

AMY GOODMAN: The RNC responded by replacing 10 of them, enough to prevent Ron Paul from being nominated from the floor. Some analysts suggest the move was made to portray a unified front among Republicans going into the November elections, even at the cost of marginalizing less powerful Republican candidates. But others maintained the decision rightly offset earlier efforts by Ron Paul supporters to gain a disproportionate number of delegates.

REINCE PRIEBUS: The question on the motion offered by the delegate from Kentucky, all those in favor will signify by saying 'Aye.'

REINCE PRIEBUS: Those opposed, 'No.'

REINCE PRIEBUS: In the opinion of the chair, the ayes have it, and the motion is agreed to.

DEENA GUZDER: The decision caused an immediate uproar. But RNC chair, Reince Priebus, was in no mood to take a roll call.

REINCE PRIEBUS: Without objection, the motion to reconsider is laid upon the table.

DEENA GUZDER: Delegates were upset over a number of rule changes. One of them would allow the presumptive nominees to replace elected delegates of their choosing.

DELEGATE: They’re wanting the chair to recognize them to make a point of order. It’s a parliamentary procedure to get recognition from the floor to speak. Basically, one of our—the delegates believe that something isn’t following the proper rules, and they want—they want to put their suggestion before the floor that, you know, something isn’t going right. And the chairman is refusing to recognize them, so they’re getting upset.

REINCE PRIEBUS: We have to proceed with the order of business.

HARRISON WHITAKER: It’s unfair to us. We sat here and objected. He said, “Are there any objections?” We objected. And, you know, it’s like, why even ask the question at that point?

JORGE LANDIVAR: Maine got screwed of half their delegates—more than half, actually. That’s why their governor is not here today, because he said he wouldn’t come down unless their delegates got seated. Half of them got taken away, and they were put in—replaced by people that the Republican Party—the RNC picked.

DEENA GUZDER: Several members of the Maine delegation walked off the floor in protest after the convention decided to replace 10 of its 24 delegates. Others on the floor were equally outraged. Kevin Erickson is a delegate from Minnesota.

KEVIN ERICKSON: What this means is that the states will no longer retain the right, under the new rules, to elect their delegates and have them stand. A presumptive nominee will be able to unseat an entire state’s delegates if they don’t like who’s on the slate. Giving a presidential candidate veto power over a state’s delegation means that future conventions will not have a dissenting voice. We won’t be able to bring motions and amendments to our platform. We won’t be able to speak for people who believe differently. You’re taking a broad tent and a grassroots party, and you’re turning it into a dictatorship that will be run by a few people with a lot of money. And average, ordinary people like myself will be out of luck and out of a voice.

DEENA GUZDER: And so, a gentleman over near the Texas delegation told us that it was unfair maneuvering, that it seemed to be an effort to quash dissidence, to not give a fair chance to those that might not have as much money and backing. What is kind of your take on that?

JANET BARRESI: You know, I was there at the state convention, and everybody was heard, and everybody had a chance to speak. But there was a lot of strong-arming on their part, but we followed their rules exactly as we were supposed to do, and the majority of the convention voted to seek the slate that I’m a part of.

SPEAKER JOHN BOEHNER: Without objection, the previous question is ordered. The question is on the adoption of the resolution. All those in favor, signify by saying 'Aye.'

SPEAKER JOHN BOEHNER: All those opposed, 'No.'

SPEAKER JOHN BOEHNER: Opinion of the chair, the ayes have it. The resolution is adopted. Without objection, the motion to reconsider is laid on the table.

DEENA GUZDER: Another controversial change allows the Republican Party to alter rules between conventions without a vote of elected delegates. Patrick Marron is a New Mexico delegate and Ron Paul supporter.

PATRICK MARRON: The RNC is trying to go ahead and put forth a rule that would make it so that they could go ahead and basically change any rule they wanted when the convention isn’t happening. Now, I believe what this is, is this is an attempt for them to control—a D.C. power grab from the top down—the Republican Party, so that grassroots organizations like the Ron Paul movement, the tea party group, people who voted Rick Santorum, not just for Ron Paul supporters but for anybody who maybe comes from a different idea or different thought process a bit from what they consider the establishment trying to get involved with the Republican Party is. So, with this rules battle that we’re having, you know, it’s unfair.

KEVIN ERICKSON: The Romney campaign is behind this. It’s Romney’s lawyers who impose these new rule committee changes, so that the rules committee won’t need the convention’s approval to change rules in the future.

DEENA GUZDER: Delegate Erickson of Minnesota says Tuesday’s rule change will shift power away from the Republican grassroots towards the establishment.

KEVIN ERICKSON: What this has done is that, for 2016, for 2020, future presidential races will be decided by three or four big states, where tons of money can be spent on television campaigns, and a grassroots campaign will have virtually no hope of finding any traction in the RNC.

DEENA GUZDER: Do you think Citizens United, the ruling that allowed for unlimited corporation, union donations, had anything to do with this, in terms of the money that Romney is able to raise?

KEVIN ERICKSON: Our system, both in the Republican and Democratic Party, has completely been corrupted by too much money. And until it changes, average people, ordinary people will not have a voice, if we just continue to see who can raise the most billions of dollars and buy elections. So, yeah, I think those decisions certainly play into it, but not just on the Republican side, on the Democratic side. What this means for the grassroots back home is that a lot of the libertarians, as well as a lot of the other conservative Republicans, will be very hard-pressed to vote for Mitt Romney. We’ve been trying to encourage them to be patient, to wait to see what happens. But they’ve given us nothing to go back and say that they’re committed to fairness or to an open hearing.

JOHN SUNUNU: It is my honor to nominate Mitt Romney for the office of president of the United States of America.

AMY GOODMAN: This is Democracy Now! “Breaking With Convention.” When we come back, we look at Paul Ryan’s views on the embargo against Cuba. They might surprise you. Stay with us. 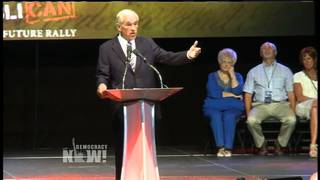