More than 29,000 Chicago public school teachers and support staff have gone on strike today after union leaders failed to reach an agreement with the nation’s third-largest school district over educational reforms sought by Mayor Rahm Emanuel. It is the first teacher strike in Chicago in a quarter of a century. Unresolved issues include the cost of health benefits, the makeup of the teacher evaluation system, and job security. Emanuel, who is President Obama’s former chief of staff, wants teacher evaluations tied to the standardized test results of students. We hear the voices of union leaders, teachers and parents on Chicago’s strike. [includes rush transcript]

It remains to be seen what impact the strike could have on the presidential election. Many of the policies at issue in Chicago are being pushed a national scale by Secretary of Education Arne Duncan, former Chicago Public Schools chief. Emanuel remains a close ally to President Obama. Last week, he announced he’s stepping down from his position as co-chair of President Obama’s re-election campaign to help raise money for a pro-Obama super PAC called Priorities USA Action.

In a moment, we’ll be joined by three guests in Chicago, but first to the voices of union leaders, teachers and parents responding to the call to strike. We start with Matt Farmer, a parent of a Chicago public school student.

MATT FARMER: As a local school councilmember and a Chicago Public Schools parent, I support the efforts of the Chicago Teachers Union in this labor negotiation, because I believe they are fighting to make schools in Chicago better for all kids. The reason I say that is because the mayor talks at length about providing a, quote, “world-class education,” end-quote, for Chicago’s kids, but what we know is that the mayor’s kids are getting one at the University of Chicago Laboratory Schools. Why, we should ask, aren’t the reforms the mayor is trying to push through the same as those that are working at the lab school? More art, more music, libraries for kids—those are not the types of resources and classes that we are seeing.

XIAN BARRETT: My name is Xian Barrett. I’m a junior and senior high school teacher at Gage Park High School here in Chicago. There’s no way to exaggerate how important it is. It’s completely an unwinnable, untenable situation without community support. And I believe strongly we can completely turn around this corporate onslaught—and I don’t even want to say with community support, but in full collaboration and, you know, righteous struggle together with communities.

GABRIEL CORTEZ: My name is Gabriel Cortez. I’m an assistant professor at Northeastern Illinois University. I support the strike because teachers’ backs are against the walls. I mean, not only that, but communities—I mean, they’re advocating for children in poor communities to have the equal amount of resources in their schools, right? Teachers are overwhelmed with classroom size. The resources aren’t there. The same type of curriculum are not being, you know, given to these poor communities. So, this is a fight for everybody.

PAULINE LIPMAN: My name is Pauline Lipman. I’m a professor of education policy studies at the University of Illinois at Chicago, and I’m part of the coordinating committee of Teachers for Social Justice. What is happening here in Chicago is also strategically significant nationally. Chicago, as you probably know, was the birthplace of the neoliberal, corporate, top-down education reform agenda—privatizing public education, closing and sabotaging public neighborhood schools, high-stakes testing, paying teachers based on test scores—that whole agenda. And Chicago is now the epicenter of the fight back against it. What happens here in Chicago will really have an implication for whether we are able to turn back this national agenda. And the eyes of the country are really on Chicago today.

AMY GOODMAN: In a moment, we’ll be joined by Professor Pauline Lipman, but first we go to two other guests in Chicago. 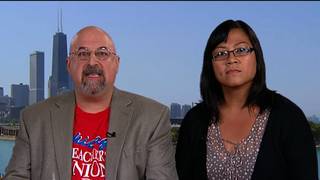