The Democratic National Convention opens today in Charlotte, North Carolina, bringing more than 35,000 delegates, journalists and activists to the nation’s second-largest financial hub. On Sunday, a coalition of groups organized the first large protest of the DNC. More than 1,000 people rallied in what was described as a March on Wall Street South. Stops on the march included Bank of America’s global headquarters and the home of Duke Energy, one of the nation’s largest utility companies and an operator of coal-fired and nuclear power plants. [includes rush transcript]

AMY GOODMAN: This is Democracy Now!, democracynow.org. We’re “Breaking With Convention: War, Peace and the Presidency.” I’m Amy Goodman, broadcasting from North Carolina. That’s Charlotte, North Carolina. This is “Breaking With Convention,” Democracy Now!’s special daily two hours of coverage from the convention, inside and out.

The Democratic National Convention opens today in Charlotte. More than 35,000 delegates, journalists and guests are packing into the city, the nation’s second largest financial hub. Scheduled speakers at the DNC tonight include First Lady Michelle Obama, San Antonio Mayor Julián Castro, and Lilly Ledbetter, the women’s equality leader and namesake of the Lilly Ledbetter Fair Pay Act. A video tribute to Jimmy Carter will be aired, but the former president was not given a speaking spot at the convention.

On Sunday, a coalition of groups organized the first large protest of the DNC. More than 1,500 people rallied in what was described as a March on Wall Street South. Stops on the march included Bank of America’s global headquarters and the home of Duke Energy, one of the nation’s largest utility companies and an operator of the coal-fired and nuclear power plants.

On Monday, unions held their annual Labor Day march. Many unions have criticized the Obama campaign for choosing to hold the convention here in North Carolina, a right-to-work state with the lowest rate of unionization in the country. On Monday night, a small group of activists connected to Occupy Charlotte held a peaceful, unpermitted march through the streets downtown.

Few arrests were reported over the weekend, but evidence has emerged that police may be maintaining a watch list of activists at the DNC. According to the Charlotte Observer, one activist named James Ian Tyson was arrested Sunday for a traffic violation. Local police initially tried to keep him in jail for the entire convention, claiming he was on a terrorist watch list. But a local judge lowered his bond and released him.

We begin today’s show in the streets of Charlotte. These are some of the voices from Sunday’s protest.

PROTESTERS: Banks got bailed out! We got sold out!

UNIDENTIFIED PROTESTER 1: Right now we’re about the banks and how homeowners have got sold out. I mean, the banks are the ones that got all the money, got all of our tax dollars, while we continually get thrown out of our homes. And so, that’s why we’re out here in the streets, because we want to take back our homes with a moratorium on foreclosures and evictions. That’s all we’re asking the president, Obama, to do for us. And President Obama has the power to do it, and he won’t do it. So, no Democrat, no Republican is going to help us with our situation, so we’re hitting the streets.

TANIA UNZUETA: My name is Tania Unzueta. I’m with the No Papers, No Fear–Ride for Justice. And we’re marching because we’re here marching against fear, against politicians telling people that they shouldn’t be out in the streets fighting for their rights. I’m undocumented myself, and I’m here with a bus full of about 40 undocumented people coming from around the country. We’ve been traveling through the South, talking to other communities, telling them that it’s OK to stand up for their rights, to tell their stories and to fight against anti-immigration laws. We think that President Obama should listen to the immigrant communities. We need him to take courageous steps just like the people on this bus have. We need to stop deportations. He’s been the president who’s deported the most people in history. And we’re here to ask him what side of history he’s going to be on.

MARIA CRUZ RAMIREZ: [translated] My name is Maria Cruz Ramirez, and I’m here in this march, first of all, because I want the dignity and respect of my children. My children have suffered a lot. They’ve had to protest against these laws. They’ve been arrested, two of them, one minor and one adult. I have to support them. I have to continue their struggle. They began this struggle, and I, as a mother, I tell all the mothers, unite with your children, because the dreams of your children are my dreams, too. It’s been my best gift to struggle and to say to the people that we can do it. Without papers and without fear, here I am.

LISA KLEIN: My name is Lisa Klein. I’m here to support all the workers that want equal and fair, just treatment up out here. There’s a lot of causes up out here, and all of them, I’m supporting—the undocumented workers, as well, too.

MIKE BURKE: Are you part of UNITE HERE?

MIKE BURKE: What are your thoughts on the selection of Charlotte to be the home of the Democratic National Convention, considering North Carolina is a right-to-work state?

LISA KLEIN: Yeah, I think we’ve got a lot of work to do down here. In some ways, I’m glad that it’s here, so we can bring attention to the causes down here and that we do need to change this right-to-work state, because people are being taken advantage of because it is a right-to-work state. So, this is part of the reason why I’ve got my family up out here, for—to protect them and other workers in the future, because people get terminated very easily under this right-to-work law that they have here.

ALLI McCRACKEN: My name’s Alli McCracken, and I’m the CODEPINK D.C. office coordinator. And I’m marching today because we want money out of politics, and we want to hold the Obama administration accountable for the money in politics and also for the wars that he’s perpetuated all around the world, dragging on Bush’s wars but also starting new ones, with drone strikes, in Pakistan, Yemen, Somalia and the Philippines. We’re here to say, “End the wars and bring our war dollars home.”

UNIDENTIFIED PROTESTER 2: This is a model, an eighth of a scale model of a Reaper killer drone. It is the assassination tool of the 1 percent. We go over to kill mostly civilians. They say they’re aiming at terrorists, but it’s civilians, mostly, that get killed. And Obama is the one with the kill list right now. So our message today is saying that the elections don’t really matter that much. They’re both doing it, both parties. And the—it’s going to take the people to stop all this madness. It’s madness. It’s making the whole world hate us.

WAYNE BORDERS: My name is Wayne Borders. I’m from Columbia, South Carolina, and I’m here on behalf of Occupy Columbia. And the reason I’m marching today is because the Democratic Party really hasn’t done anything, in my opinion, to really push for the end of discrimination in the workplace for gay trans, lesbian transgender people, and just queer people in general. That’s one of the reasons why I’m marching today.

MATT HICKSON: Hi, I’m Matt Hickson. I’m from UNC Chapel Hill, part of Students for a Democratic Society. And I’m here marching today because the cost of education is way too high, and queer people in this state, like me, are being discriminated against. And it’s just about time that we’ve had enough with the system that’s causing all of these discriminatory practices and difficulties for young people. We demand a future for our generation.

MIKE BURKE: And what’s your message to President Obama this week?

PROTESTERS: No coal! No nukes! No fracking!

SALLY KNEIDEL: My name’s Sally Kneidel. I’m a writer and a biologist. I’m here because of climate change, because of corporate control, corporate influence that affects climate change. You know, climate change is going to destroy not only all wildlife, which is my thing because I’m a biologist, but the whole planet is going to become uninhabitable. And yet, Duke Energy, which is one of the main drivers of climate change in this country as the biggest electric utility, is not doing anything, because it’s a for-profit corporation, and the only thing they care about is profits. They give lip service to doing something about it, but they burn a lot of coal. And I’m here to say we can’t let corporations control the government anymore.

UNIDENTIFIED PROTESTER 3: This is the emergency that we wake up to every morning, a planet poisoned by fossil fuel pollution. And this isn’t happening by accident. The fossil fuel industry—coal, oil and natural gas—are working to keep us dependent on poisonous fuels that cook our planet. The house is on fire, and every living thing on planet earth is in it. And when Bank of America funds the coal industry, they pour more gasoline on the fire. It’s up to us to stop Bank of America from funding coal, oil and natural gas. We must fight climate change! Fight harder!

AMY GOODMAN: Some of the people on the March on Wall Street South at the protest this past weekend here in Charlotte. This is Democracy Now!, democracynow.org, “Breaking With Convention.” Back in a minute. 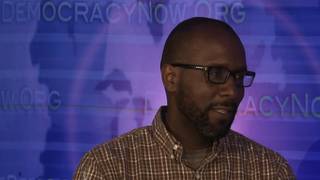