As President Obama backs an immigration plan that includes a path to citizenship for some of the country’s 11 million undocumented residents, deportations are continuing at record levels. We go to Arizona, where one family was almost torn apart because of a three-year-old traffic violation. Last night, 11-year-old Jose Arma was reunited with his father, Edi Arma, who was detained two weeks ago and almost deported to Guatemala. One day after their reunion, Jose and Edi join us from Phoenix along with immigration activist Viridiana Hernandez, who helped organize a community campaign to win Edi’s release. [includes rush transcript]

JUAN GONZÁLEZ: Today, we look at what has been a major push for comprehensive immigration reform this week. On Monday, a bipartisan group of senators announced a blueprint for reform that includes a path to citizenship for some of the estimated 11 million undocumented people living in the United States. President Obama followed Tuesday with a speech supporting the proposal.

PRESIDENT BARACK OBAMA: I’m here today because the time has come for commonsense, comprehensive immigration reform. The time is now. We have to deal with the 11 million individuals who are here illegally. Now, we all agree that these men and women should have to earn their way to citizenship. But for comprehensive immigration reform to work, it must be clear from the outset that there is a pathway to citizenship.

JUAN GONZÁLEZ: During his address, President Obama also called for tougher border enforcement and a system for tracking those who overstay visas. More than 400,000 people have already been deported this year—each year since Obama has been in office.

AMY GOODMAN: While President Obama was speaking in Nevada, an emotional scene was unfolding in neighboring Arizona. Over the past two weeks, immigrant activists have been organizing to reunite three U.S.-born children with their father, who was recently placed in detention. As late as Wednesday, Edi Arma was expected to be deported to Guatemala because of a traffic stop in 2009. He was detained earlier this month as he went to drive his kids to school, in his driveway. His 11-year-old son Jose witnessed the agents from Immigration and Customs Enforcement as they took his father into custody.

JOSE ARMA: Monday morning, when we and my sisters were going to school, my dad was outside, and when I was going to go with him to open the car, these guys came, and they got him, and they arrested him. They arrested him, and I was trying to say goodbye to my—to my dad, but—but they [inaudible]—when I was trying to say goodbye, they pushed me, and I fell on the ground.

AMY GOODMAN: Well, last night, after a campaign led by community organizers with the group Puente Arizona and his son and others, Edi Arma was reunited with his family. Edi was given permission to stay and work in the country for one year but still faces the threat of deportation.

Now, Edi and his son join us from Phoenix. We’re also joined by Viridiana Hernandez, a DREAM activist who helped in the campaign.

We welcome you all to Democracy Now! Let’s begin with Jose. Jose, you’re 11 years old. You helped free your dad from detention. How do you feel today?

JOSE ARMA: Today I feel happy that he’s out and they let him go.

AMY GOODMAN: And Edi, why were you taken into custody? And how does it feel to be free after several weeks?

AMY GOODMAN: Jose, can you translate?

VIRIDIANA HERNANDEZ: He says, “I feel happy, and I feel blessed to be here.”

VIRIDIANA HERNANDEZ: I’ll go ahead and translate. “I feel happy, and I feel blessed to be here. I feel proud of my son, who fought for his father to get out. And I’m just extremely happy right now, because I’m going to be able to be with him and my two daughters.”

JUAN GONZÁLEZ: And Viridiana, could you talk about the campaign, the pressure campaign on the government to recognize the plight of this particular family?

VIRIDIANA HERNANDEZ: Yeah. Well, when we started organizing, we saw Edi’s case. He had no criminal record. He had three U.S. children. And according to all these guidelines set from—by the Obama administration, Edi was a low-priority case. And so, we used their own promise to tell them, like, “Hey, this is what you told us. You said our community will not get deported anymore if they were not criminals. And Edi was not a criminal.” And so, on that same day that Obama was making his speech about immigration, Edi was about to be deported. And so we continued the pressure and telling them that was what they said and exposing the lies, that our community continues to be deported on a daily basis in high numbers, but at the same time getting pressure from—from our congressmen—we’re their constituents—and so making them advocate for this family and for Jose and for the three U.S. citizen children.

AMY GOODMAN: Jose, did you understand what was happening when your dad was taken in the driveway, when he was about to drive you and your sisters to school?

AMY GOODMAN: Did the men tell you who they were, why they were doing this?

JOSE ARMA: No, they didn’t say anything.

JUAN GONZÁLEZ: And Edi Arma, your time in detention, could you talk about that, as well? The—how many people were you being held with, as well, during the detention process?

VIRIDIANA HERNANDEZ: He’s saying—he’s talking about when he was arrested. Six men came to take him. And he asked them, he pleaded for them to please not arrest him in front of his children, to please take him but not do the arrest and not do it in front of the children. But it was useless. They went ahead and did that. And he didn’t want his children to be traumatized and have to see that. And he’s going to talk about the detention itself.

EDI ARMA: [translated] It was really hard to be there, like the conditions and the treatment. The communication isn’t easy, so I wasn’t able to constantly talk to my family. I didn’t know what was going on. I wasn’t able to let them know what was going on in there with me. I rarely communicated with them. It was hard. But the most frustrating thing was the fact that I wasn’t able to be with my kids and thinking and having that thought of possibly never having—never being able to see my children again. I think that was the hardest thing. But thanks to all the movement and the organizations and the activists that were out there who helped me without knowing me, I’m here now.

AMY GOODMAN: Viridiana Hernandez, as we wrap up, you, yourself, know arrests. You are one of the young DREAMers. You’ve been arrested yourself, even though you, too, risk deportation. Can you talk about what’s being proposed now, how it affects you, the activists, fellow students, that you’ve been working with to change the U.S. immigration laws?

VIRIDIANA HERNANDEZ: As an undocumented student, it’s been really a long and frustrating process. We got deferred action, but that’s not enough. We need deferred action for our communities. We need—and then we need immigration reform. Meanwhile, while people talk and preach about immigration reform, again, we see good people like Edi continue to be deported. And so, one of the biggest things that we need to advocate for is the humanity part of this. And just, if we’re serious about a comprehensive immigration reform, then we need to be serious about stopping the deportations, because while we wait another year, that’s another 400,000 people. So, as an advocate and as an activist with this, we continue to fight for those things and immigration reform, but in the meanwhile we also want some kind of relief for our communities. And so, we continue doing it. I mean, at this point, we have put out our face out there. We are risking ourselves, because it’s worth it. And so many organizations that worked on this case—Puente, DREAM activists, Team Awesome—we’re getting united, and we’re saying that we’re going to do this.

And from the political side, we elected these people now. We had a huge Latino vote turnout in Arizona, door to door. The turnout was more than ever before. And so, not only is it from the activist side of having these visuals, but it’s also from the organizing side of that. We have the votes, as well.

AMY GOODMAN: Well, I want to thank you all for being with us from Phoenix, and Jose especially. You’re 11 years old; that you fought so hard for your dad to be freed, seeing you on all the television networks, you were very brave. Jose Arma, Edi Arma and Viridiana Hernandez, we thank you so much for being with us. This is Democracy Now! We’re going to continue this discussion about immigration when we come back. Stay with us. 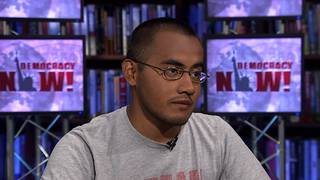