As the problem-plagued roll-out of President Obama’s signature healthcare policy undergoes congressional scrutiny for the first time, we speak with Clay Johnson, a former Obama campaign innovation expert who founded Blue State Digital, the company that built Obama’s 2008 website. During a House panel on Thursday, lawmakers questioned executives of two of the lead contractors behind the website, healthcare.gov — CGI Federal and Quality Software Systems Incorporated — about the myriad of glitches and defects. Johnson says the new website is built with outdated and proprietary software. “When the government is building software like this, it ought to be built out in the open — built with a licensing system called open source so that the public truly owns it,” Johnson says. He notes that “In 1996, Congress lobotomized itself by getting rid of its technology think tank called the Technology Assessment Office. So they’re writing bills where they don’t understand the technology required in their laws.”

StoryAug 11, 2020How the Pandemic Defeated America: Ed Yong on How COVID-19 Humiliated Planet’s Most Powerful Nation

JUAN GONZÁLEZ: The problem-plagued roll-out of President Barack Obama’s signature healthcare policy has undergone congressional scrutiny for the first time. During a House panel on Thursday, lawmakers questioned technology contractors about a myriad of defects with the healthcare.gov website. The online portal for uninsured Americans in 36 states has been marred by crashes, glitches and system failures since it went live earlier this month. The website’s launch began a six-month enrollment period that is expected to draw an estimated seven million people to sign up for federally subsidized private insurance for 2014. During the hearing, Republican Representative Tim Murphy of Pennsylvania accused the Obama administration of wasting millions of dollars of taxpayer money.

REP. TIM MURPHY: We were promised a website where people could easily compare plans and costs. $500 million later, we find the American public have been dumped with the ultimate cash for clunkers, except they had to pay the cash and still got the clunker.

AMY GOODMAN: Lawmakers questioned executives of two of the lead contractors behind the website: CGI Federal and Quality Software Systems Incorporated. They both blamed demanding deadlines, higher-than-anticipated website traffic, and a last-minute registration system that they say may have overloaded the system.

For more, we go to Atlanta, Georgia, where we’re joined by Clay Johnson, former Obama innovation expert who founded the company that [built] Obama’s 2008 site; CEO, Department of Better Technology. He’s the author of The Information Diet: The Case for Conscious Consumption.

Clay Johnson, welcome to Democracy Now! What do you think happened? Why has this website not worked?

CLAY JOHNSON: Well, government doesn’t have a lot of people to choose from when they’re looking for contractors to build this stuff. And I think part of the problem is that the same people that are building drones are building websites. When government is building a website like this, they have to use a system called procurement, which is about 1,800 pages’ worth of regulation that all but ensures that the people who are building this stuff are the people with the best lawyers, not the people with the best programmers. And so, you know, you have this sort of fundamental lack of talent amongst the contractor ecosystem that’s building this stuff, that it’s bound to be bad work—that, combined with the fact that in 1996 Congress lobotomized itself by getting rid of its technology think tank, called the Technology Assessment Office. So when they’re writing bills, they don’t understand the technology that they’re requiring in their laws. This is what you get when you have a Congress that is basically brainless on technology, and government who can only pick from a few old, stodgy contractors. You’re bound to have this result. And, in fact, the standings group came out earlier this week and pointed out that over—for all procurements over $10 million, 94 percent of them fail.

JUAN GONZÁLEZ: Well, that’s what I wanted to ask you about, these—we’ve seen it not only at the federal level with this, the healthcare roll-out, but at local government levels, these huge technology contracts that promise the moon and the stars, and then when they actually are rolled out have major, major problems. And what about CGI, the main contractor here? Have you had any experience with their track record in the past?

CLAY JOHNSON: I’ve never worked with them directly, but I can tell you from watching the hearing yesterday that, from a technologist point of view, both the questions from Congress were sort of absurd and not particularly helpful, and the answers from the contractors were also just demonstrably ignorant of the technology that they were managing. And so, you have these bizarre exchanges where, you know, a member of Congress is asking the vice president of CGI Federal about code inside of the website that isn’t even being displayed and isn’t even relevant to the user, and CG—and the VP of CGI Federal not even recognizing that it’s not displayed and not even relevant to the user. It was this really baffling set of exchanges. It’s like watching my one-year-old argue with my cat.

JUAN GONZÁLEZ: What—what about this whole issue of many of these contractors insisting on developing proprietary software for many projects like this? What is the impact of that on—not only on cost, but on the ability to hold contractors accountable for the kind of product they produce?

But the other point about, you know, contractors developing out in the open and using open-source technology is that it makes websites more secure. It makes it so that security holes are easier to find. And that’s why you see, I think, lots of companies moving towards open-source infrastructure, because you’ve got many eyes on problems.

In the case of federal contracting, though, it’s not just about a move to open source, it’s also about moving from these large, stodgy, old vendors, who basically haven’t had to compete in the past couple of decades, to smaller, more innovative businesses, who are more competitive. And what the Obama administration needs to do to—not to fix healthcare.gov, but to fix the next healthcare.gov from happening, is to really open the door to these smaller—these smaller businesses who have more experience in delivering this stuff.

AMY GOODMAN: So what would it mean right now, Clay Johnson? How could this idea about open-source technology be incorporated into what everyone is experiencing right now?

CLAY JOHNSON: Well, I think that it would be a great—it would be a great solution to this problem for the CMS and HHS teams to really start developing out in the open. I think part of the reason why the White House and this administration is suffering from kind of a PR disaster is because they’re not being open and transparent with how this stuff is working and when people can be expected—you know, I shouldn’t be talking to you; it should be people from CMS and HHS talking to you about what’s going on, what’s happening on a regular and daily basis. You know, in development cycles and programming, you have these things called “release notes.” And release notes are, you know, you send out very short notes about what’s changed in the software so far and what progress is being made and what’s left to do. And I think the American public would love to see what’s going on with healthcare.gov in that regard.

AMY GOODMAN: What are they hiding, Clay Johnson? We just have—

CLAY JOHNSON: And I think that HHS and CMS could start doing that.

AMY GOODMAN: What are they hiding? We have 20 seconds.

AMY GOODMAN: Clay Johnson, we want to thank you very much for being with us, former member of President Barack Obama’s technology team, founded the company that built Obama’s 2008 site. It’s called [Blue State Digital. He is CEO at] Department of Better Technology.

How the Pandemic Defeated America: Ed Yong on How COVID-19 Humiliated Planet’s Most Powerful Nation 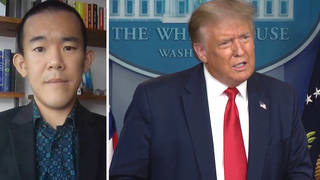 How the Pandemic Defeated America: Ed Yong on How COVID-19 Humiliated Planet’s Most Powerful Nation