Ten days after Typhoon Haiyan struck the Philippines, the United Nations says some four million people have been displaced, up from 900,000 last week. The toll of the dead or missing stands at around 5,000. The massive typhoon has cast a dark cloud over the U.N. climate summit in Poland, with Filipinos and other climate change activists from around the world demanding concrete action on global warming. We’re joined by Gerry Arances, national coordinator of the Philippine Movement for Climate Justice, who is attending the U.N. climate summit in Warsaw, Poland.

AMY GOODMAN: Frédéric Chopin’s First Ballade in G Minor. Frédéric Chopin was born here in Poland in 1810. When you fly into Warsaw, you arrive at the Frédéric Chopin Airport. This is Democracy Now!, democracynow.org, The War and Peace Report. I’m Amy Goodman. And that’s just where we are. We’re on the road in Warsaw, Poland, broadcasting from the U.N. climate summit, known as the COP 19. We’re actually at the National Stadium here in Warsaw.

We turn now, though, to the Philippines. Last week’s massive typhoon has cast a cloud over the summit, the Filipinos and other climate change activists demanding action. We’re joined now by Gerry Arances, national coordinator of the Philippine Movement for Climate Justice.

And we welcome you to Democracy Now! I saw you Saturday. As thousands of people gathered outside the National Stadium, you addressed the crowd. Can you talk about what you’re demanding here? And were you planning to come to Warsaw even before the storm in your country?

GERRY ARANCES: Yeah, we were really planning to come to Warsaw, basically bringing the demands of the Filipino people. It’s not like we were hit just this year; it’s been there for the past five years. So, the main demand is basically for developed countries to owe to their responsibility that they have agreed on 20 years ago. And it’s as simple as—the path is as simple as capping their emissions. And that is the order of the day, and that is what we are demanding, and at the same time, funds for reparations, for their climate debts to the developing countries.

AMY GOODMAN: Some documents were released last week, leaked documents from the Secretary of State John Kerry to the climate delegation, talking about the issue of, well, in U.N.-ese, in the U.N. language, that’s called “loss and damage,” he said that’s “blame and liability.” Explain what loss and damage is and why that’s important to the Philippines.

GERRY ARANCES: It’s definitely very important to the Philippines. That is why our delegation, the official delegation, is so empathic and so emotional in pushing for it, because it’s not—it’s not just them that’s pushing for it. It’s the whole Filipino nation. What is happening in the Philippines, or what has just happened in the Philippines, is a—is an example of how developing—why developing countries needs loss and damage. It’s beyond adaptation. I think no amount of adaptation measures—we’ve been doing a lot of adaptation measures in those islands, both by the government and the civil society and the communities. And I don’t think no amount of adaptation measures can fend off that kind of a storm. That is why the mechanism for loss and damage is very important.

AMY GOODMAN: Last year, I remember well, in Doha, Yeb Saño, now the chief climate negotiator, breaking down in tears as Bopha hit, the typhoon last year. Now, what’s known in the Philippines as Yolanda, Typhoon Haiyan, the figures you have—I mean, I think the government has said something like 4,000, 5,000 people are dead, but it hasn’t reached a number of areas where the typhoon had the most devastating effect.

GERRY ARANCES: Yeah. It’s really saddening, because there’s a lot—still a lot of areas that have not been reached. And unfortunately, it is the communities and it is the civil society organizations that have actively reached them already. The—

AMY GOODMAN: You were at the rally on Saturday. You were also outside the coal summit, as they’re calling it this morning, at the Ministry of the Economy. Among your fliers that you gave out, around coal—why is coal relevant to the Philippines? Of course, here in Poland, which you might call Coal-land, something like 88 percent of their energy derives from coal, even though the population here is—has been polled over and over saying they want more reliance on renewable energy. How does that affect the Philippines?

GERRY ARANCES: It’s very relevant to the Philippines, on two fronts: one, domestically; secondly, the whole climate issue. First, we have been facing threats from corporations who wanted to set up coal-fired power plants in the whole of my country. Corporations have been wanting to open up mountains and areas to mine coal. We’re not only rich in gold. We’re not only rich in copper, nickel, chromite. We’re also rich in coal, but not the same as high-grade coal. We have a low-grade coal. But right now, it’s like it’s even worse than 10 years ago, when the coal industry in the Philippines started or entered. We will have in the next—until the 2020, like, for example, in an island in the south where Bopha have devastated—

GERRY ARANCES: Last year—right now it’s—the share of renewable energy is 60/40. By 2020, it will be 70/30 in favor of coal. So it’s really relevant to us domestically. And we’ve been—for this year, we’ve been really fighting against coal.

AMY GOODMAN: Where does the World Bank fit into this story? We just have a minute to go.

GERRY ARANCES: The role of the World Bank is very much significant in the Philippines. We are one of, if not the highest, electricity rate in Asia, next to Japan—or we’ve even surpassed it a few years ago. And it’s because of the whole privatization push that have—that the World Bank and the Asian Development Bank have designed for the Philippines. And it sort of dampens the mobilization of renewable energy. So, it’s like it’s a—it’s been hijacked by coal corporations, because they say that it’s cheaper. They say that we are using clean coal, but coal every day kills our brothers and sisters.

AMY GOODMAN: Gerry Arances, we will certainly continue to follow this story, from the Philippine Movement for Climate Justice, where the Philippines has dealt with Typhoon Haiyan, known as Typhoon Yolanda in the Philippines. It is believed to be the most serious, the strongest typhoon to make landfall in history. 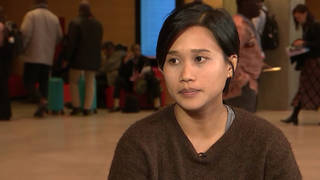