As we wrap our week of coverage at the U.N. climate summit in Warsaw, Poland, we discuss Africa’s climate crisis with two guests from the continent: Tosi Mpanu-Mpanu, former chair of the Africa Group at the U.N. climate negotiations, and Mithika Mwenda, secretary general of the Pan African Climate Justice Alliance. Many say Africa is least likely to have the financial resources needed to withstand the impact of climate change. “Every year which is passing, Africa is being pushed closer, closer to the fire. Africa can certainly not wait,” Mpanu-Mpanu says.

AMY GOODMAN: To talk more about the climate crisis in Africa, we’re joined by two guests. Tosi Mpanu-Mpanu is the former chair of the Africa Group here at the U.N. climate change negotiations. He’s from the Democratic Republic of Congo. Also with us is Mithika Mwenda, secretary general of the Pan African Climate Justice Alliance, part of the walkout Thursday, but has come back inside the summit just to talk with us today.

We welcome you both to Democracy Now! Tosi Mpanu-Mpanu, you’re inside. What’s being accomplished here? What do you think needs to happen, particularly for the continent of Africa?

TOSI MPANU-MPANU: Well, I believe that we should start to see some momentum, because this COP cannot be seen in isolation. This COP is certainly linked to the COP next year in Lima and to the one in Paris in 2015, where we’re supposed to agree on this new climate regime. And if some developing countries are to take more action, this action will be commensurate with the means put at their disposal. So we need to see the good signal when it comes to finance. Unfortunately, we are not seeing this here at all.

AMY GOODMAN: What do you mean by “finance”?

TOSI MPANU-MPANU: Finance has to take place in, I believe, three places. First of all, long-term finance, it is important that we see how we will get to the $100 billion by 2020. We actually need some midterm goal, because we have no clarity, in this post-fast-start era, where we are. Are we going to show plateau from last year? Are we falling off the cliff? Or is there going to be some increase? First, we need to see some direction. Second, we need to see the capitalization for the Green Climate Funds. Right now it is a nice vote; unfortunately, it’s an empty vote. So we need to see some political signals as regard to democratization of resources to be put in the fund.

AMY GOODMAN: What are the major obstacles that you see here? And if you see them as countries, name the countries.

TOSI MPANU-MPANU: Well, I’m not going to do any naming and shaming, but I believe that—

AMY GOODMAN: I know you’re a very good diplomat, so maybe I’m going to have to ask our other guest.

TOSI MPANU-MPANU: Yes, no, what I’d like to say is that we know that people have committed according to the convention, which we have. We call it the rule of law. We know that we have three group of countries. Annex I is supposed to show leadership when it comes to mitigation. Annex II countries—

AMY GOODMAN: What do you mean by “mitigation,” for people who aren’t familiar with the lingo?

TOSI MPANU-MPANU: Mitigation means to reduce the emissions of greenhouse gases, which constitutes this problem of climate. The Annex II countries are countries which are developed and which are supposed to provide means, which are financials, technology transfer and capacity building. And then you have non-Annex I countries, which are developing countries. They have to undertake action also, but that action will be commensurate with whatever support they get. So, unfortunately, we’re not seeing any signal as regards to finance.

We do see a positive signal with the adaptation fund, which was running out of resources, given the very low prices of carbon—has been, it seems, to replenish. It’s going to be replenished, because countries have made pledges which are close to $100 million. So, as far as Africa is concerned, we are quite happy because the overriding priority of the African Group is adaptation. We see a bright signal. But not to go beyond—beyond the adaptation action, to have African countries to undertake more actions as regards mitigations, as regard REDD-plus, which was the Reduction of Emissions from Deforestation and Forest Degradation, and to undertake NAMAs, to strengthen the capacity, we need to see scaled-up financing.

AMY GOODMAN: Mithika Mwenda, you represent the Pan African Climate Justice Alliance. Which nations are these? And what do you think needs to be accomplished here? You have very much an outside perspective.

MITHIKA MWENDA: Yeah, I am not a diplomat like my friend Tosi. What I can say is that we are really agitated. And countries, it is actually good to mention them. We have Japan, we have United States, we have Canada, we have Australia, Russia—countries which have the biggest obligation to make in terms of emission reductions and transition to the low-carbon development pathways. But what we have seen here is that they are backtracking on their earlier commitments. And we don’t see a reason why we should continue with these negotiations when they are not honoring what they were first to do in the first place.

AMY GOODMAN: Talk about the issue of equity. Who is most impacted by climate change?

MITHIKA MWENDA: We in Africa are greatly impacted by climate change. You have shown a video by Patrick Bond. The science is very clear about climate change. We have seen the most recent IPCC report. And to us, ICC is—

AMY GOODMAN: The IPCC, of course, is the scientific panel—

AMY GOODMAN: —of a thousand scientists.

MITHIKA MWENDA: What we have seen, actually, to us, is confirmation of what we are seeing. It is predicting that by this until 2030, 2050, but we are seeing that it is coming earlier than was predicted. And this is really scary. [inaudible] the industrialized countries are taking not care—not taking care of this. We have seen rivers drying up, persistent droughts. We have seen floods, erratic rainfall. Snows which appeared in our mountains during my lifetime, I’ve seen them disappearing. So these are things which I’m seeing there. So, the issue of climate change is actually not to be—to be told by somebody. We are experiencing that. And that’s why we have come here even, to offer testimony to the industrialized countries and the global community that it is indeed not a fiction. It is something which is happening.

AMY GOODMAN: How did you come to Warsaw, and who were the people that you came with?

MITHIKA MWENDA: We came here, first and foremost, as Africans to join the rest of the global community in solidarity, to join the movement, to tell the global community that the inaction which we have been seeing here is really unacceptable. And we have to work together. Of course we think—we believe that it is that global collaboration which is going to defeat the impacts of climate change. We in the South, we in poor countries in Africa, are doing a lot. Small group—women groups in Africa are doing a lot in small, low-carbon development efforts, like agriculture, organic agriculture, cook stoves, and so forth and so forth. But where we are supposed to see action in industrialized countries—in United States, in Australia and those others—we are seeing that action.

AMY GOODMAN: Tosi Mpanu-Mpanu, people in the United States who are listening or watching right now might say, “We’d like to be able to give charity to other countries, but we’re dealing with our own crises.” Can you talk about that issue of those who see this as charity?

TOSI MPANU-MPANU: Well, it’s certainly not charity. I think it’s rather something along the lines of compensation, because runaway climate change is putting one billion Africans in harm’s way. Today those Africans have to go through adverse effect of a global phenomenon that they didn’t create. It’s actually creating not only droughts, floods; it’s creating conflicts, because people have to go further and further to get some water, and other people are not just welcoming them. So, Mr. Jones can drive two SUVs in the U.S., while a poor African is fighting to get some water. So it’s about doing what’s right. And it has to be done in two ways: to reduce their lifestyles, the consumption of carbon, in the North, and to provide some resources so that we can deal with the climate change phenomenon which was imposed on us.

AMY GOODMAN: How does climate change affect the DRC, the Democratic Republic of Congo?

TOSI MPANU-MPANU: Many ways, many ways. I mean, lands that were—that was very fertile is no longer fertile. In certain plateau where we didn’t have malaria, malaria now is there. We do have also problems as regards to irregularity of rainfalls, so it’s created a diminution in crop yields. So, it does have a bearing on the very livelihoods of 70 million people in the DRC. And, once again, they didn’t contribute to create this climate change phenomenon.

AMY GOODMAN: Final words, as this conference is wrapped up? Can Africa wait until 2015 or 2020 for the world to reach a climate deal?

TOSI MPANU-MPANU: No, Africa, every year which is passing, Africa has been pushed closer, closer to the fire. Africa can certainly not wait. You will see around the world many African political or economic refugees. Very soon you will start seeing climate refugees. So, you better prepare.

AMY GOODMAN: The Pentagon itself in the United States has come out with a report saying that the conflicts of the [21st] century could well be fueled by climate change, this concept of climate refugees.

TOSI MPANU-MPANU: Climate change and water stress. Like I said, people will venture further and further to get water, and other people will just not welcome them. So, because of a climate change phenomenon which was created thousands of kilometers away, people in Africa are going to suffer.

AMY GOODMAN: Well, I want to thank you both very much for being with us. Tosi Mpanu-Mpanu, from the Democratic Republic of Congo, he’s the former chair of the Africa Group at the U.N. climate change negotiations. I also want to thank Mithika Mwenda, secretary general of PACJA, the Pan African Climate Justice Alliance. 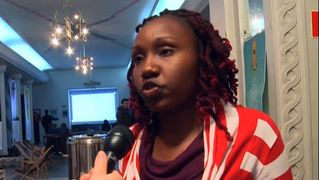