Three computer consultants were found guilty on Friday of multiple charges for defrauding New York City of millions of dollars in the largest corruption case in city history. Private consultants were found guilty of siphoning tens of millions of dollars in kickbacks from the scandal-ridden $700 million CityTime payroll project. Last year, the project’s main contractor, SAIC, was forced to repay the city $500 million as part of a deferred prosecution agreement. Meanwhile, a top SAIC official is poised to become the next secretary of the Air Force. The Senate is expected to soon hold a confirmation vote for Deborah Lee James, who was in charge of “corporate responsibility” at SAIC at the time of the CityTime scandal. We get an update on the story from Democracy Now! co-host Juan González, who originally broke the story in the New York Daily News.

AMY GOODMAN: Juan, before we go on to our first story, the story you exposed, the CityTime scandal in New York, the largest in New York history, more people have just gone—been convicted.

JUAN GONZÁLEZ: Yes, on Friday afternoon, a jury took—a federal jury in Manhattan federal court took 10 hours to convict three of the masterminds of the CityTime fraud, a massive fraud: Mark Mazer, Gerard Denault and Dimitry Aronshtein. They are now the sixth, seventh and eighth people who have been found guilty in this massive conspiracy that went on for almost a decade with contractors for New York City who were creating a payroll system, stealing tens of millions of dollars. And, in fact, the main contractor, SAIC, the defense contractor, ended up paying the city of New York back $500 million, and then federal authorities seized—they say now they’ve seized about $40 million more in assets from the criminal conspiracy. So, altogether, the taxpayers have recouped $540 million. And I started the articles in late 2009 and early 2010. By the end of 2010, the New York City Department of Investigations and then the federal prosecutor, Preet Bharara, then began arresting people. Altogether, 11 people were arrested in the conspiracy. Eight have now been convicted. Two of them fled to India with about $35 million that they took with them when they fled to India. And one subsequently died before the trial. So it’s been really an amazing saga of, one after another, these corrupt consultants—

AMY GOODMAN: And CityTime was providing?

JUAN GONZÁLEZ: Well, interestingly, it was supposed to be a time-keeping—a payroll and time-keeping system to make sure that the 300,000 city workers did not cheat on their hours. And it was the people who were developing the system—to assure that the city workers weren’t cheating—who were robbing the taxpayers of hundreds of millions of dollars.

JUAN GONZÁLEZ: Yes, Deborah Lee James was—President Obama has named her to be secretary of the Air Force, and she was a chief executive of SAIC, the main company that ended up paying back $500 million, and was actually in charge of ethics and integrity at SAIC at the time that all of these—that all of these contractors were arrested by federal authorities. So, the idea that President Obama would nominate her now to be in charge of the Air Force and passing or approving the purchase of missiles and planes, when she couldn’t even do well in terms of assuring the integrity of one contract in New York City, is really astounding. But the Senate has still to vote on her nomination.

AMY GOODMAN: And, of course, we’ll continue to follow the story. 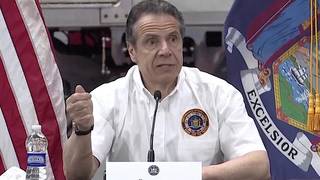