As a measure to require mandatory labeling of genetically engineered foods fails to pass in Washington state, we speak to one of its major supporters, David Bronner, the grandson of Dr. Bronner who founded Dr. Bronner’s Magic Soaps, who spent $2.3 million on the “Yes on 522” campaign, but was outspent 3-to-1 by opponents. The campaign against Initiative 522 drew millions of dollars from major corporations and out-of-state organizations who spent more than $22 million to defeat it, including Monsanto, which donated more than $5 million, and DuPont, which gave almost $4 million. Pepsi, Coca-Cola and Nestle dedicated more than $1.5 million each. This comes as a recent New York Times poll found 93 percent of Americans want labels on food containing GM ingredients. Sixty-four countries require it. Bronner notes votes are still being counted and the measure is not yet officially defeated, and says similar measures are pending in Connecticut and Maine.

Web ExclusiveOct 31, 2014“The GMO Deception”: Sheldon Krimsky on How BigAg & the Government Is Putting Your Food at Risk

JUAN GONZÁLEZ: We end the show with this week’s vote in Washington state against a measure that would have required mandatory labeling of genetically engineered foods. Washington would have been the first state to pass a law on GMO labeling. The campaign over Initiative 522 drew millions of dollars from out of state and was the costliest initiative fight in state history. Major corporations and other opponents of GMO labeling spent $22 million to defeat the measure. Monsanto donated over $5 million; DuPont, $4 million; while Pepsi, Coca-Cola and Nestle dedicated more than $1.5 million each. The opposition outspent supporters about three to one.

For more on the implications of this vote, we go to San Francisco, where we’re joined by David Bronner. He is the grandson of Dr. Bronner who founded Dr. Bronner’s Magic Soaps, which was the largest donor to Yes on 522 campaign. David Bronner has been the president of the company since 1998.

David, welcome to Democracy Now! How much did Dr. Bronner’s contribute?

DAVID BRONNER: We contributed $2.3 million to the “yes” side. Yeah, we knew—we knew that—you know, what the other side was going to do and that we had to step in and help—

AMY GOODMAN: Why was—

DAVID BRONNER: —you know, an amazing grassroots coalition there, be able to fight these guys.

AMY GOODMAN: Why is this debate so important to you—the labeling of GMO foods—and what are the lessons you’ve learned from this campaign battle?

DAVID BRONNER: Well, you know, basically, six chemical companies have bought the seed industry in this country and are engineering resistance to their weed killer. So when you hear with genetic engineering, oftentimes it’ll be spun like it’s going to be, you know, vitamins in rice or nitrogen fixing, but that’s not the reality. The reality on the ground is it’s about chemical companies selling weed killer.

And, you know, most of these crops, 80 percent of the genetically engineered acreage, is engineered to resist Roundup, which is Monsanto’s leading weed killer. Overuse of this weed killer is now resulting in super weeds that are resistant to and aren’t being killed by normal doses or applications, so ever more weed killer is being poured onto our fields. Next-generation genetically engineered crops in the pipeline are being engineered to resist dicamba and 2,4-D. These are much more toxic weed killers. They’re older, much more toxic. 2,4-D is the main ingredient in Agent Orange, which coincidentally both Monsanto and Dow also manufactured.

You know, this is the exact wrong direction as a society we should be going in. We need to be getting off the chemical treadmill. And genetically engineered—genetic engineering, as applied, is basically doubling down on this, you know, unsustainable chemical model of industrial agriculture.

JUAN GONZÁLEZ: Well, given the fact that the public does want the right to know, on labeling of GMO products, why are the chemical companies—what arguments are they able to use in initiatives like what happened in Washington to defeat these measures?

DAVID BRONNER: Well, it’s kind of the classic playbook on the “no” side of, you know, the big money corporations. What they’ll—they don’t really take on the right to know. You know, that’s a big loser for them. But it’s—they’ll kind of raise these false specters of, you know, “Your food costs are going to go up by $500 a family,” you know, that this initiative is written poorly and is a bureaucratic nightmare. You know, this is kind of like the “no” side playbook. You know, just you don’t really take on the issue; you just say, “Well, this might be a good idea, but this initiative is terrible.” And, you know, they just kind of manipulate people’s fears and kind of take away their confidence in voting for their own interests. You know, it’s a very sophisticated propaganda machine. I mean, $22 million in a state like Washington, I mean, you cannot turn around without being bombarded with their garbage—

DAVID BRONNER: —you know, and it was being layered with mailers.

AMY GOODMAN: David, former Washington State Attorney General Ken Eikenberry said in an ad opposed to 522 it would provide misleading information on food to consumers. I want to go to that clip.

KEN EIKENBERRY: I worked to protect consumers from misleading product information. That’s why I oppose Initiative 522. It would require some foods to be labeled as genetically engineered even if they’re not. But it gives special exemptions to many foods that contain or are made with GE products. That’s the exact opposite of truth in labeling. It would give consumers misleading information about the foods they buy. I urge a “no” vote.

AMY GOODMAN: What about the—what about those charges, David Bronner? That was former Washington State Attorney General Ken Eikenberry.

DAVID BRONNER: Yeah, and Republican. You know, it’s ridiculous. Basically, the disclosure of genetic engineering would apply to all foods that currently have to disclose ingredients and nutrition information, and doesn’t apply to foods that don’t. It just follows general federal labeling guidelines. And if we don’t, we’re going to get preempted. We can’t—you know, when he’s saying we’re exempting foods, well, what’s being exempted? Like restaurant food, you know, stuff that isn’t labeled. You don’t label—you know, you don’t label your—you know, when you order out at a restaurant, that’s not labeled. And, you know, they’re making hay, like, oh, we’re exempting restaurant food. And it’s like, well, we don’t label restaurant food.

AMY GOODMAN: David, we only have 30 seconds. My question is: Where do you go from here? Are there other such campaign battles going on around the country?

DAVID BRONNER: Yeah, there’s 26 states considering legislative—or pursuing legislative strategies. Both Connecticut and Maine have labeling laws that will trigger as soon as five other states enact labeling. And also, Washington is not—it’s not done yet. It’s an all-mail ballot. Ballots are still being—our votes are still being counted. We’re up to like two to one. The late surge, you know, especially from King County, the Seattle center—you know, the urban central—I mean, we’re starting to see two to one come in. And, you know, we’re up to 47 percent now. I mean, we may yet close this out with a victory in Washington state.

AMY GOODMAN: Well, we will continue to follow it, certainly. David Bronner, thanks for joining us, helped fund the Yes on 522 campaign, grandson of Dr. Bronner, who founded Dr. Bronner’s Magic Soaps. 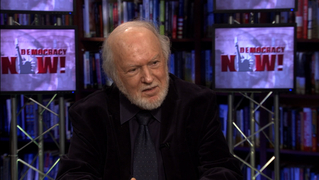