Cuban President Raúl Castro was among the speakers at today’s memorial to Nelson Mandela. In an unprecedented exchange, President Obama shook Castro’s hand as he made his way to speak at the podium. “Let us pay tribute to Nelson Mandela,” Castro said. “The ultimate symbol of dignity and unwavering dedication to the revolutionary struggle, to freedom and justice, a prophet of unity, peace and reconciliation. As Mandela’s life teaches us, only the concerted effort of all nations will empower humanity to respond to the enormous challenges that today threatens its very existence.” We also air a video clip of the 1991 meeting between Mandela and Fidel Castro in Cuba.

Alongside his comrades in the struggle, Mandela has led his people in the battle against apartheid to open the way to a new South Africa, a nonracial and a united South Africa in its quest for happiness, equality and the well-being of all of its children, a nation bent on overcoming the consequences of colonialism, slavery and racial segregation. Setting an example of integrity and perseverance, Mandela later headed the efforts to eradicate poverty, reduce inequality and create opportunities for all.

Mandela has set out an insurmountable example to Latin America and the Caribbean, which are currently moving towards unity and integration for the benefit of their peoples on the basis of respect for diversity and convinced that it is only through dialogue and cooperation that discrepancies can be resolved and a civilized relationship established between those who think differently. As Mandela’s life teaches us, only the concerted efforts of all nations will empower humanity to respond to the enormous challenges that today threaten its very existence.

Cuba, a country born in the struggle for independence and for the abolition of slavery, and whose children have African blood in their veins, has had the privilege of fighting and building alongside the African nations. We shall never forget Mandela’s moving homage to our common struggle when on the occasion of his visit to our country on July 26, 1991, he said—and I quote—”The Cuban people have a special place in the hearts of the peoples of Africa.”

I remember at this moment his bond of affection with Fidel Castro, a symbol of the fraternal relations between Africans and Cubans. Fidel has said—and I quote—”Nelson Mandela will not go down in history for the 27 consecutive years he spent incarcerated without ever renouncing his ideas. He will go down in history because he was capable of cleaning up his soul from the poison that such an unfair punishment could have planted there, and for his generosity and wisdom, which at the time of victory allowed him to lead with great talent his selfless and heroic people, knowing that the new South Africa could not be built on hatred and vengeance.”

AMY GOODMAN: Cuban President Raúl Castro, speaking at today’s memorial for South African President Nelson Mandela. Before we go to break, let’s go back to that moment in 1991 that Raúl Castro just described when Mandela traveled to Cuba to meet then-President Fidel Castro.

PRESIDENT FIDEL CASTRO: [translated] I haven’t visited my South African homeland yet. I want it, I love it as a homeland.

AMY GOODMAN: That was Nelson Mandela in 1991, soon after he was released from jail, visiting President Fidel Castro in Cuba, thanking him for his support. The United States had provided surveillance intelligence to the apartheid regime in the early 1960s that located Nelson Mandela in hiding, that led to his arrest and subsequent 27 years in prison. This is Democracy Now!, democracynow.org, The War and Peace Report. When we come back, we’ll hear from the former South African Archbishop Desmond Tutu. Stay with us.

Desmond Tutu’s Lively Tribute to Nelson Mandela: “He Gave Us an Incredible Gift”

NEXTDesmond Tutu’s Lively Tribute to Nelson Mandela: “He Gave Us an Incredible Gift” 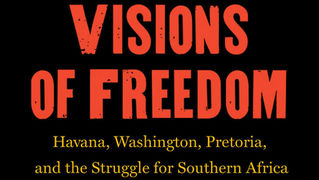