President Obama: Nelson Mandela “Freed Not Just the Prisoner, But the Jailer As Well”

Tens of thousands gathered at the FNP Stadium in Soweto near Johannesburg today for a memorial to honor Nelson Mandela, who died last week at the age of 95. Nearly 100 heads of state traveled to South Africa for the memorial, including President Obama and Cuban President Raúl Castro. Mandela’s body will then lie in state for three days at the Union Buildings in Pretoria, where he was sworn in as president in 1994. He will be buried on Sunday in Qunu, his ancestral home. We begin our coverage of the memorial with President Obama’s address. “It took a man like Madiba to free not just the prisoner, but the jailer as well,” Obama said. “While I will always fall short of Madiba’s example, he makes me want to be a better man.”

StoryDec 09, 2013Rev. Jesse Jackson on the Life of Nelson Mandela & the Movement that Backed His Anti-Apartheid Fight

AMY GOODMAN: Tens of thousands of people are gathering today in Johannesburg as this broadcast is on for a memorial to honor Nelson Mandela, who died last week at the age of 95. Nearly a hundred heads of state traveled to South Africa for the memorial, including President Obama and Cuban President Raúl Castro. After today’s memorial, Mandela’s remains will lie in state for three days at the Union Buildings in Pretoria, where he was sworn in as president in 1994. He will be buried on Sunday in Qunu, his ancestral home. We begin today’s broadcast with President Obama, who was the first world leader to address the memorial service at the soccer stadium in Soweto paying tribute to Nelson Mandela.

PRESIDENT BARACK OBAMA: Mandela taught us the power of action, but he also taught us the power of ideas; the importance of reason and arguments; the need to study not only those who you agree with, but also those who you don’t agree with. He understood that ideas cannot be contained by prison walls or extinguished by a sniper’s bullet. He turned his trial into an indictment of apartheid, because of his eloquence and his passion, but also because of his training as an advocate. He used decades of prison to sharpen his arguments, but also to spread his thirst for knowledge to others in the movement. And he learned the language and the customs of his oppressors, so that one day he might better convey to them how their own freedom depend upon his.

Mandela demonstrated that action and ideas are not enough. No matter how right, they must also be chiseled into law and institutions. He was practical, testing his beliefs against the hard surface of circumstance and history. On core principles he was unyielding, which is why he could rebuff offers of unconditional release, reminding the apartheid regime that prisoners cannot enter into contracts. But as he showed in painstaking negotiations to transfer power and draft new laws, he was not afraid to compromise for the sake of a larger goal. And because he was not only a leader of a movement but a skillful politician, the Constitution that emerged was worthy of this multiracial democracy, true to his vision of laws that protect minority as well as majority rights and the precious freedoms of every South African.

And finally, Mandela understood the ties that bind the human spirit. There is a word in South Africa, ubuntu, a word that captures Mandela’s greatest gift—his recognition that we are all bound together in ways that are invisible to the eye, that there is a oneness to humanity, that we achieve ourselves by sharing ourselves with others and caring for those around us. We can never know how much of this sense was innate in him or how much was shaped in a dark and solitary cell. But we remember the gestures, large and small—introducing his jailers as honored guests at his inauguration, taking a pitch in a springbok uniform, turning his family’s heartbreak into a call to confront HIV/AIDS—that revealed the depths of his empathy and his understanding. He not only embodied ubuntu, he taught millions to find that truth within themselves.

It took a man like Madiba to free not just the prisoner, but the jailer as well; to show that you must trust others so that they may trust you; to teach that reconciliation is not a matter of ignoring a cruel past, but a means of confronting it with inclusion and generosity and truth. He changed laws, but he also changed hearts.

For the people of South Africa, for those he inspired around the globe, Madiba’s passing is rightly a time of mourning and a time to celebrate a heroic life. But I believe it should also prompt in each of us a time for self-reflection. With honesty, regardless of our station or our circumstance, we must ask: How well have I applied his lessons in my own life? It’s a question I ask myself, as a man and as a president.

We know that, like South Africa, the United States had to overcome centuries of racial subjugation. As was true here, it took sacrifice, the sacrifices of countless people, known and unknown, to see the dawn of a new day. Michelle and I are beneficiaries of that struggle. But in America and in South Africa and in countries all around the globe, we cannot allow our progress to cloud the fact that our work is not yet done.

The struggles that follow the victory of formal equality or universal franchise may not be as filled with drama and moral clarity as those that came before, but they are no less important, for around the world today we still see children suffering from hunger and disease, we still see run-down schools, we still see young people without prospects for the future. Around the world today, men and women are still imprisoned for their political beliefs and are still persecuted for what they look like and how they worship and who they love. That is happening today.

And so, we, too, must act on behalf of justice. We, too, must act on behalf of peace. There are too many people who happily embrace Madiba’s legacy of racial reconciliation, but passionately resist even modest reforms that would challenge chronic poverty and growing inequality. There are too many leaders who claim solidarity with Madiba’s struggle for freedom, but do not tolerate dissent from their own people. And there are too many of us—too many of us on the sidelines, comfortable in complacency or cynicism when our voices must be heard.

The questions we face today—how to promote equality and justice, how to uphold freedom and human rights, how to end conflict and sectarian war—these things do not have easy answers. But there were no easy answers in front of that child born in World War I. Nelson Mandela reminds us that it always seems impossible until it is done. South Africa shows that is true. South Africa shows we can change, that we can choose a world defined not by our differences, but by our common hopes. We can choose a world defined not by conflict, but by peace and justice and opportunity.

We will never see the likes of Nelson Mandela again. But let me say to the young people of Africa and the young people around the world: You, too, can make his life’s work your own. Over 30 years ago, while still a student, I learned of Nelson Mandela and the struggles taking place in this beautiful land, and it stirred something in me. It woke me up to my responsibilities to others and to myself, and it set me on an improbable journey that finds me here today. And while I will always fall short of Madiba’s example, he makes me want to be a better man. He speaks to what’s best inside us.

After this great liberator is laid to rest, and when we have returned to our cities and villages and rejoined our daily routines, let us search for his strength. Let us search for his largeness of spirit somewhere inside of ourselves. And when the night grows dark, when injustice weighs heavy on our hearts, when our best-laid plans seem beyond our reach, let us think of Madiba and the words that brought him comfort within the four walls of his cell: “It matters not how strait the gate, how charged the punishment, the scroll, I am the master of my fate, I am the captain of my soul.”

AMY GOODMAN: President Barack Obama, the first world leader to speak at the Nelson Mandela memorial in the Soweto soccer stadium just outside Johannesburg. Coming up, we’ll hear the speeches of Brazilian President Dilma Rousseff, of Cuban President Raúl Castro, and on this day that the Nobel Peace Prize was handed out in Oslo, we’ll hear from a previous Nobel Peace laureate, South African Archbishop Desmond Tutu. Stay with us. 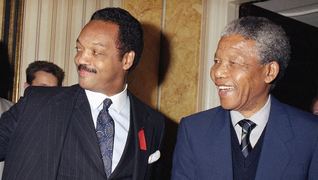 Rev. Jesse Jackson on the Life of Nelson Mandela & the Movement that Backed His Anti-Apartheid Fight