At today’s memorial for Nelson Mandela in Johannesburg, Brazilian President Dilma Rousseff was among the foreign leaders to honor the former South African president and anti-apartheid leader. “He also was a source of inspiration for similar struggles in Brazil and across South America,” Rousseff said. “His fight reached way beyond his nation’s border and inspired young men and women to fight for independence and social justice.”

AMY GOODMAN: Music from the memorial service for Nelson Mandela in the Soweto soccer stadium. The last time he spoke publicly was in 2010 at this very stadium outside of Johannesburg, Soweto, where he also lived. This is Democracy Now!, democracynow.org, The War and Peace Report. I’m Amy Goodman. As we continue our coverage of the Nelson Mandela memorial in South Africa, we turn to Brazilian president and former political prisoner herself, Dilma Rousseff.

PRESIDENT DILMA ROUSSEFF: [translated] Apartheid, defeated by Mandela and the South African people, was the most elaborate and cruel form of social and political inequality of modern times. This great leader had his eyes focused on the future of his country, of his people and of all Africa. He also was the source of inspiration for similar struggles in Brazil and throughout South America.

Madiba, as you affectionately called him, stands as an example and a key reference for all of us—for the stoic, firm patience in enduring prison and suffering; for the enlightened strength and determination that he showed in his fight; for his deep commitment to justice and peace; above all, for his moral and ethical superiority. He was able to turn the quest for truth and forgiveness into the pillars of national reconciliation and the building of a new South Africa. We must pay homage to this unmatched expression of greatness and humanism as was the case of Nelson Mandela. His fight weighed beyond, way beyond his national border, and inspired men and women, young people and adults, to fight for independence and social justice. He left many lessons, not only for his beloved African continent, but also for all who seek freedom, social justice and world peace.

Like the South Africans who mourn Madiba, Nelson Mandela, with your chants, we, the Brazilian nation, proudly carry African blood in our veins, and we, too, mourn and celebrate the example of this great leader who belongs to the pantheon of humankind. The Brazilian government and people bow down before the memory of Nelson Mandela. I would like to convey to Ms. Graça Machel and family members, to President Zuma and to all South Africans our deepest feelings of pain and sorrow. Long live Mandela forever!

AMY GOODMAN: Brazilian President Dilma Rousseff, herself a political prisoner for years in Brazil. She followed President Obama’s address at today’s memorial service for Nelson Mandela in Soweto. Rousseff recently turned down a state dinner in Washington, D.C., to protest U.S. spying on Brazil, both of her, of Petrobras and of others in her country. 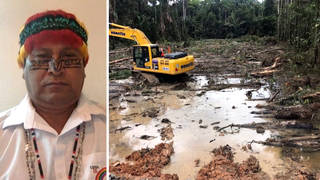