At the premier of the new animated film, “Is the Man Who is Tall Happy?” in New York City, Noam Chomsky joined filmmaker Michel Gondry in conversation. We play excerpts of Chomsky’s remarks on his educational background and his reflections on “Manufacturing Consent,” another feature-length film about him from 1992. One of the filmmakers behind the movie, Peter Wintonick, died last month on November 18.

AMY GOODMAN: We turn now to Noam Chomsky. It was the premiere of the film here in New York, and they spoke together at the—after the film showed. This is Noam Chomsky responding to a question about his own education.

NOAM CHOMSKY: The truth is, I have absolutely no professional credentials—literally, which is why I’m teaching at MIT. They didn’t—that’s absolutely true. They didn’t care. You know, it’s a science-based university. They didn’t care if you had a guild card, something or other. So, we saw a little of it there. But I hated high school. It was the academic high school in the city, the one that all the kids went to who were going to go to college, so teachers didn’t really have to work very hard, because we were going to pass the exams anyway. And I couldn’t stand it. And this is 1945, so there were no questions about going to some college somewhere else. You lived at home, you worked, you went to the local college, period.

Local college happened to be the University of Pennsylvania. I, as a high school student, looked at the—looked through the catalog. Looked really exciting, all these great courses in all sorts of different fields. I was really looking forward to getting out and going to college. After my first year of college, each course I took in every field was so boring that I didn’t even go to the classes. I mean, the way—I was quite interested in chemistry, but the way I passed the chemistry course was because I had a friend, a young woman about my age, who took extremely meticulous notes in red and blue and so on, and she lent me her notes so I didn’t have to go to class and I could pass the exams. You had to go to—there was a lab. And I knew, you know, if I try to carry out a lab experiment, it’s not going to work, period. But there was a lab manual, and it was obvious what the answers had to be, so I just filled in the answers, and I never even went to the lab. And then I had my comeuppance when I had to apply the next semester, because I was charged $17, which was a lot of money in those days, for lab breakage. And I couldn’t tell them, “Look, I never went to the labs,” so I had to pay them. But it sort of went on like that. I never really had an undergraduate degree. By the time I was—I started mainly taking a scattering of graduate courses without much background in them. I then was lucky enough to get a four-year fellowship, graduate fellowship, just did my own work and essentially never had—I never had much of a formal education.

It was—one of the greatest educations, educational experiences, I ever had in those four years was at Harvard. It was to have a desk in the stacks. In those days, the stacks were open, not anymore. A graduate student had a little desk in the stacks, and you had the whole of Widener Library, this amazing library, there. You can kind of walk around and pick things out from all kind of places, things you never heard of, and pursue them. That was a fantastic experience. I think it’s a great way to get an education.

And then I was, again, very lucky. I got to MIT, which is a research institution. They didn’t care what—didn’t care about credentials. You could work on what you wanted to. And it turned out very well. But it’s just a series of accidents. I think very few people are lucky enough to have an experience like that. So I’m not suggesting that you don’t go to college and do your work and get your degree.

AMY GOODMAN: Noam Chomsky at the premiere of the film Is the Man Who is Tall Happy? He was also asked to talk about his role in the making of another feature-length film, Manufacturing Consent, released in 1992. Noam began by talking about one of the filmmakers, Peter Wintonick, who died last month on November 18th.

NOAM CHOMSKY: Actually, I can’t really claim to have worked with—I spent a lot of time with him and enjoyed talking to him—very imaginative, thoughtful, dedicated person, who spent—really spent his life, not only then, but for many years afterwards, doing very admirable work of all kinds, often turned out in documentary films, but on serious issues which were hard to investigate. He was—did a lot of courageous, imaginative work. As far as that film is concerned, I had about as much to do with it as the moon has if people take photographs of the moon. You know, I was giving talks and giving interviews. And Peter and Mark Achbar was—I don’t know what you call him technically—producer or something?

NOAM CHOMSKY: Was—they’d come around and film, and we’d have some interviews, and they put it together. And I have to admit, I never saw it. I can’t stand watching myself, so I never saw the film. But I’m told it was a pretty impressive film, they did a very good job.

I know one thing that they did that I was very pleased about, was to take one issue that I’d been spending a lot of time working on, and it was a very difficult case. There were a small number of people working on it. None of us ever thought it would get anywhere. It was the case of East Timor, which maybe you know about, which was invaded in 1975 by Indonesia, with strong U.S. support. It led almost quickly to virtual genocide. I don’t like the term “genocide” much, but this one came pretty close, maybe 200,000 people killed out of a population of 600,000 or 700,000, all with full U.S. support. U.S. could have cut it off in two minutes. England, France, others also joined in to try to pick up a bit of the spoils. Indonesia is a rich country, lots of resources and a lot of incentive to support them. And there was very a small number of people who were trying to work on it, trying to bring some attention to it to see if something could be saved from the wreckage. Went on for a long time. Amy Goodman here was one of the people in 1991 who—she and Allan Nairn went and were practically beaten to death in a demonstration. They got—did some very good work and got some—a lot of important publicity. And now, finally, in 1999, President Clinton, under a lot of pressure, international and domestic, essentially called it off, with a phrase. He essentially told the Indonesian generals, “Game’s over.” They left. That’s what it means to be a powerful state. Now, there’s a lot to learn from that. But one thing I was pleased about in Peter’s film is that they emphasized this and did very evocative and imaginative work about it, which I think probably informed plenty of people about it. So it maybe saved a lot of lives.

AMY GOODMAN: Noam Chomsky talking about Peter Wintonick, the filmmaker who who made Manufacturing Consent. Noam Chomsky was speaking at the opening of the new film, Is the Man Who is Tall Happy? You can visit our website at democracynow.org to watch the full video of Noam Chomsky in conversation with filmmaker Michel Gondry, who has made the latest film about Noam’s work, and Anthony Arnove. We’ll also post online an illustration by Michel Gondry, the director and animator of Is the Man Who is Tall Happy? He did it here at Democracy Now! just after the interview that we did with him. We’ll post that illustration online at democracynow.org. 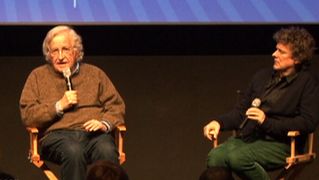