Along with his rise to worldwide stardom, the musician and actor Harry Belafonte has been deeply involved in social activism for decades. One of Dr. Martin Luther King’s closest confidants, Belafonte helped organize the March on Washington in 1963. On Friday, the NAACP awarded Belafonte their highest honor, the Spingarn Medal. “Numerous strategies in the quest of our freedom has been played out at all levels of the social spectrum,” Belafonte says in his acceptance speech. “What is missing, I think, from the equation in our struggle today is that we must unleash radical thought. … America has never been moved to perfect our desire for greater democracy without radical thinking and radical voices being at the helm of any such quest.” [includes rush transcript]

The son of Caribbean immigrants, Harry Belafonte grew up on the streets of Harlem and Jamaica. In the '50s, he spearheaded the calypso craze, became the first artist in recording history with a million-selling album. He was also the first African-American musician to win an Emmy. Along with his rise to worldwide stardom, Belafonte became deeply involved in the civil rights movement. One of Dr. King's closest confidants, he helped organize the March on Washington in 1963.

Well, on Friday night, the NAACP honored him with their highest honor, the Spingarn Medal. He began his speech referring to Newark Mayor Cory Booker’s introduction.

HARRY BELAFONTE: Mayor Booker, that was heavy. I—I don’t know that I’ve ever been introduced quite like that before. And as you called out the moments that represent the crossroads of the paths in my life, I’m reminded that no matter how I am anointed for what it is that I do and try to do, it was never without the knowledge and the joy that what I said and what I still say was really rooted in the courage and the strength of so many remarkable people who befriended me and who counseled me and who became an intricate part of my journey. And to sit here and to watch you do the work that you do in the city of Newark, which is not a garden, not a paradise, but a place of remarkable struggle, you are to be anointed for how well you’re doing the job in Newark. But your mother didn’t tell you everything. But your daddy was my best friend.

What I’m about to say, I had occasion to say a couple of weeks ago. I was in California celebrating the NAACP Image Awards. And what made that event, which I have attended quite often, and I’ve been anointed with the awards in different intervals in my journey, but what made this one particularly significant was that it was the first time that in the history of the NAACP awards that the Spingarn Medal honoree was being platformed. So the country got an opportunity to not only look at the young men and women who have achieved so much in the arts, but to also take a moment and a pause to look at our social concerns as well as our social journey. The speech I’m about to give is one that I gave the night on television. Some of you may have heard it. And for those of you who haven’t, I will give you the opportunity to hear it now. For those who are hearing it for the second time, I hope the redundancy doesn’t drive you from the room. But it won’t be long. But it says there’s a preciseness to the thought, when I put those thoughts on paper, that it was about America as I see it today and where we stand.

The group that is most devastated by America’s obsession with the gun is African Americans. Although making comparisons can be dangerous, there are times when they must be noted. America has the largest prison population in the world, and the over two million men, women and children who make up the incarcerated, the overwhelming majority of them is black. African Americans are the most unemployed, the most caught in the unjust systems of justice. And in the gun game, they are the most hunted. The rivers of blood that wash the streets of our nation flow mostly from the bodies of our black children. Yet, as the great debate emerges on the question of the gun, white America discusses the constitutional issues of ownership, while no one speaks to the consequences of our racial carnage. Where is the outraged voice of black America? Where? And why are we mute? Where are our leaders? Where are our legislators? Where is the church?

Not all, but many who have been the recipients of this distinguished award, were men and women who spoke up to remedy the ills of the nation. They were all committed to radical thought. They were my mentors, my inspiration, my moral compass. Through them, I understood America’s greatness. I understood America’s potential. Dr. W.E.B. Du Bois, Martin Luther King Jr., Eleanor Roosevelt, and others like Fannie Lou Hamer and Ella Baker, Bobby Kennedy and Miss Constance Rice, and perhaps, for me, most of all, Paul Robeson.

For me, Mr. Robeson was the sparrow. He was an artist who made those of us in the arts understand the depth of that calling, when he said, “Artists are the gatekeepers of truth. We are civilization’s radical voice.” Never in the history of black America has there been such a harvest of truly gifted and powerfully celebrated artists. Yet, our nation hungers for their radical song. In the field of sports, our presence dominates. In the landscape of corporate power, we have more African-American presence as captains and leaders of industry than we’ve ever known. Yet we suffer still from abject poverty and moral malnutrition.

Our only hope lies in the recall of a moment which has been to referred to earlier here, and was my last meeting with Dr. King. It was just before he left to go off to Memphis to join the strike with sanitation workers. We held a strategy meeting, and Dr. King—the meeting was in my home, and Dr. King, during that meeting, appeared to be distracted and in a dark mood. When we asked him what was the matter, he said, “We have come far in the struggle for integration, and although we may be winning some battles, we have not won the war. And I have come to the conclusion that in our struggle to integrate, we may be integrating into a burning house.” That thought, we found deeply disturbing. And when we asked him if such was his belief, what would he have us do? And his reply was, “We will have to become firemen.”

Numerous strategies in the quest of our freedom has been played out at all levels of the social spectrum—youth groups, women’s groups, labor groups, religious groups. The list goes on and on. And yet, the opposition persists in its resistance to our quest. What is missing, I think, from the equation in our struggle today is that we must unleash radical thought. America keeps that part of the discourse mute. I would make an appeal for the NAACP, as the oldest institution in our quest for human dignity and human rights, that we stimulate more fully the concept and the need for radical thinking. America has never been moved to perfect our desire for greater democracy without radical thinking and radical voices being at the helm of any such quest.

The pursuit of justice is all I have ever known. And I have often said that what defines a true patriot—and in reading a book, The Life of Theodore Roosevelt, I came upon a quote, where he said that when the state finds itself moving away from its commitment to the rights of the citizen, when those rights are being trampled and misguided, when there are those who would wrest from the Constitution the equality that it attempted to give all of us, then the citizens of the nation have not only the obligation, but the right, to challenge the state and those who run it. And he said, if we fail to do that, if we fail to meet that moral criteria, then we, the citizens, should be charged with patriotic treason.

And that struck me because what we are really on is a journey to end the treasonous behavior of the contemporary political scene and what it is trying to do to steal our votes—to steal our votes, to what it’s doing to our women, to what it’s doing to our children, to what it’s doing to wherever black people have moments of need and want. I would ask that unless black America—or I would say that unless black America raises its voice loud and clear, America—and it is specifically our responsibility—of all the cultural diversity that makes up this nation and its promise to be great, the most powerful force is the voice of African Americans, and America will never become whole, and America will never become what it dreams to be, until we are truly free and truly a bigger part of this.

AMY GOODMAN: The legendary actor, musician, activist Harry Belafonte, speaking on Friday night, awarded the NAACP’s Spingarn Medal. He turns 86 years old on March 1st. You can go to our website for our full interview with Harry Belafonte, our archive of interviews. 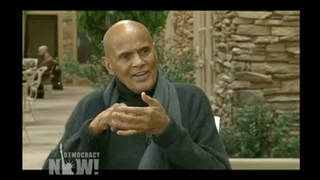