Since 1999, the nonprofit charity Donors Trust has handed out nearly $400 million in private donations to more than 1,000 right-wing and libertarian groups. The fact it has been able to quietly do so appears to explain why it exists: Wealthy donors can back the right-wing causes they want without attracting public scrutiny. The most detailed accounting to date shows Donors Trust funds a wish list of right-wing causes, prompting Mother Jones magazine to label it “the dark-money ATM of the right.” We’re joined by John Dunbar, politics editor at the Center for Public Integrity and co-author of the group’s months-long investigation into Donors Trust. “They’re essentially a pass through,” Dunbar says of Donors Trust. “They act as a kind of a middleman between what are very large, well-known private foundations created mostly by corporate executives, like the Kochs, for example, and they direct the money of those contributions to a very large network of right-leaning, free-market think tanks across the country.” [includes rush transcript]

AARON MATÉ: When it comes to the wealthy funders of right-wing causes, the big names are well known: billionaires like the industrialist Koch Brothers and the casino magnate Sheldon Adelson, super PACs like Americans for Prosperity and Karl Rove’s Crossroads GPS. Now, through them, hundreds of millions of dollars have poured into right-wing causes and candidates. But now it turns out this web of dark-money donations is even more secretive than we previously thought. That’s because the operations of a largely unknown group have now come to light. They’re called Donors Trust, a nonprofit charity based in Virginia.

Since 1999, Donors Trust has handed out nearly $400 million in private donations to more than 1,000 right-wing and libertarian groups. The fact Donors Trust has been able to quietly do so appears to explain why it exists: Wealthy donors can back the right-wing causes they want without attracting public scrutiny. Donors Trust is classified as a “donor-advised” fund under U.S. tax law, meaning its funders don’t have direct say in where their money goes. That in turn allows them to remain largely anonymous.

AMY GOODMAN: But the most detailed accounting to date shows Donors Trust funds a wish list of right-wing causes, prompting Mother Jones magazine to label it, quote, “the dark-money ATM of the right.” Donors Trust recipients include the American Legislative Exchange Council, or ALEC, a mechanism for corporate interests to help write state laws; the Franklin Center for Government and Public Integrity, a media outlet that unabashedly promotes right-wing causes; and the State Policy Network, a number of right-wing think tanks that push so-called “free-market” policies.

Joining us from Washington, D.C., is John Dunbar, politics editor at the Center for Public Integrity, worked on the group’s months-long investigation into Donor’s Trust. We did ask Donors Trust to join us, but they declined our request.

John Dunbar, lay out just what Donors Trust is.

JOHN DUNBAR: Well, they’re essentially a pass through. What they do is, is they act as a kind of a middleman between what are very large, well-known private foundations created by—mostly by corporate executives, like the Kochs, for example, and they direct the money of those contributions to a very large network of right-leaning, free-market think tanks across the country, including those that you’ve named. By doing—by running it through the middleman, it essentially obscures the identity of the original donors, of the folks who have provided the funds themselves. And the organization itself actually makes that clear on its own website, essentially saying people who give money to the organization can avoid being identified or being connected with potentially controversial issues.

AARON MATÉ: And John Dunbar, so the figure is $400 million since 1999. Why is it that all this is just coming to light now?

JOHN DUNBAR: Well, we kind of stumbled onto it, to be honest with you. We’ve been, at the Center for Public Integrity—that’s publicintegrity.org if you’d like to read our full report on it—we were looking at activities at the state level, and we were noticing a certain continuity. There was a certain sameness to what was going on in various states on these issues. And we have been looking at the American Legislative Exchange Council for quite some time, and we were looking for how these organizations were funded. And this Donors Trust organization kept popping up, and it seemed to be such an amorphously named organization. We couldn’t really figure out where it was. So we got to wondering, “Well, who’s funding Donors Trust?” And then we backed it up a step, and then we started looking at some of the more better-known right-wing, free-market foundations, particularly those run by the Koch brothers—the Searle Freedom Trust, for example, is another one; the Bradley Foundation—these are all very well-known right-leaning foundations—and found that an enormous amount of the funds that came into Donors Trust came from those—from those organizations.

AMY GOODMAN: John Dunbar, in your report, you speak with the Donors Trust president and CEO, Whitney Ball. She says much of the group’s focus is on the state level because of, quote, “gridlock” at the federal level of government means donors see, quote, “a better opportunity to make a difference in the states.” Ball also sits on the board of the State Policy Network. Can you talk about this focus on activity at the state level?

JOHN DUNBAR: Yeah, I think that—I don’t think anybody would argue with her point that it’s hard to get anything done in Washington these days. They have been a lot more successful at the state level. And I think that in Washington we have a tendency to sort of get tunnel vision: We don’t think that anything that happens outside of Washington really matters, when in fact the laws that are passed in the states are extremely important. Some of the focus of the Donors Trust recipients have been on specific state issues that, you know, affect all of us. You know, some of their favorite issues are right-to-work laws in the states; climate issues; renewable energy, as you’ll hear from Suzanne and The Guardian, which has done such great work on that; and as well as, you know, tax issues, etc. People tend to look at states and what’s happening in a particular state in isolation; they don’t look around and see that the same thing seems to be happening in other states. And it’s—this is clearly a coordinated effort to create state-based think tanks. There’s 51 of them that they’ve funded all across the country to push legislative issues. And then they created their own media empire to support—they even support the ideas behind those issues.

AARON MATÉ: Well, John Dunbar, if you could follow up on that, this media group, the Franklin Center for Government and Public Integrity. They receive 95 percent of their funding from the Donors Trust?

JOHN DUNBAR: Right, and that was kind of shocking, actually. You know, we—that is a foundation-financed reporting organization. I have to say that the Center for Public Integrity is also a foundation-financed reporting organization, so—however, we do not get 95 percent of our funding from any individual donor. Franklin does. The difficulty with that is that, first of all, you have to wonder what—whether the reporting is going to be influenced by that single donor. Secondly, they are a (c)3, which is—which means donations to them are tax deductible, and they don’t pay taxes themselves. That’s a public trust, by the way. That’s—the Donors Trust is in the same position. If they were not a publicly financed nonprofit, they would lose their nonprofit status. By getting all of their money or most of their money through Donors Trust, they’re able to maintain their (c)3 status as a, quote, you know, “publicly financed charity,” unquote. And if all that money came from one person, for example, they would lose that exemption, or they would be part of—they would have to be absorbed by whatever foundation it was that was funding them.

AMY GOODMAN: John, in 2009, Republicans, bloggers, conservative think tanks began to cite a report that the Obama administration had pumped billions of stimulus funds into phantom congressional districts, suggesting money intended to create jobs and shore up the economy had been misused or lost. One of the key websites to report this was newmexicowatchdog.org, which is almost entirely funded by Donors Trust. The story was picked up by Fox News, like in this report from Stuart Varney.

BILL HEMMER: I don’t know if we should be laughing or crying over this.

AMY GOODMAN: That Fox News report was based on a report by newmexicowatchdog.org, one of the many so-called watchdog websites that are almost entirely funded by the Donors Trust. John Dunbar, your response?

JOHN DUNBAR: Well, I think that the implication of that report was that there were millions and millions of dollars that were being misspent, when the reality was it was data errors. I don’t think anyone would defend the government’s ability to create accurate databases. They clearly didn’t do a very good job on that front, at least on the Recovery Act. However, the implication that all of this money was going into a black hole was actually nonsense. It was kind of a phantom issue about phantom districts, as the Associated Press had reported. A lot of the reporting by these different watchdog organizations that are funded by Franklin has been called into question, including by the Nieman Center at Harvard that’s called it a lack in context and in some cases actually distortions of facts.

AMY GOODMAN: We’re going to break, John Dunbar, politics editor at the Center for Public Integrity, works on this months-long investigation into the Donors Trust called “Donors Use Charity to Push Free-Market Policies in States.” When we come back, Suzanne Goldenberg will also join us, of The Guardian, who’s been investigating the funding of climate denial groups. This is Democracy Now! We’ll be back in a minute. 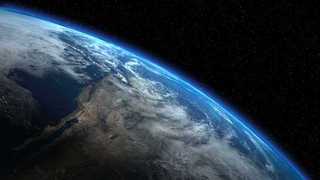