NERMEEN SHAIKH: Many Americans wake up to a bowl of Kellogg’s Corn Flakes and a glass of Tropicana orange juice, but few know the true story behind their favorite food products. Now, Oxfam America has released a comprehensive report that measures how the world’s 10 largest food companies perform on food justice issues. The report is the culmination of an 18-month investigation, and it’s called “Behind the Brands.” The 10 companies Oxfam scores are Associated British Foods, Coca-Cola, Danone, General Mills, Kellogg’s, Mars, Mondelez, Nestlé, PepsiCo and Unilever. Collectively, these companies make $1 billion a day, according to Oxfam. No company emerges with passing grades.

Oxfam has also launched an interactive website accompanying the report, which grades each of the companies according to seven criteria: small-scale farmers, farm workers, water, land, climate change, women’s rights and transparency.

AMY GOODMAN: Democracy Now! reached out to several of the companies named in Oxfam’s report, but not all responded in time for our broadcast. General Mills responded saying, quote, “These are topics General Mills cares about, as we too want to ensure the future of the world’s food supply. We will continue efforts to advance our work in these areas as part of our commitment to global sustainability.”

Well, for more, we go to Washington, D.C., where we’re joined by Chris Jochnick, the director of private sector engagement at Oxfam America, one of the lead researchers for the new report, “Behind the Brands,” also co-founder of the Center for Economic and Social Rights.

Chris, welcome to Democracy Now! Talk about what you found in this report. Don’t be afraid to name names.

CHRIS JOCHNICK: Thanks, Amy. Nice to be back.

What we found is that, across these seven issues that you just mentioned—farm workers, women, water, land, greenhouse gas emissions—all of the 10 companies have some projects in the field, are doing some things right, but in general are failing to do what they could do to create a better system that ensures that all of the people in the food chain, from the farmers all the way to the consumers, benefit from it in some way.

And in particular, what we found is a lot of opacity. It’s just very difficult for people to understand, as your lead-in said, what goes on behind their bowl of Kellogg’s or their drinks from Pepsi. That whole system is very obscure. And so, in particular, we were putting a spotlight on questions of transparency and accountability. We’re trying to ask companies, do they actually know how women are treated in their supply chains? Do they know how many women are in their supply chains? Do they recognize the unfair treatment of smallholder farmers and workers or the threats to their land and water, and are they reporting on it? So, we were trying to focus on those larger bigger-ticket issues that go largely unaddressed by most of the companies.

NERMEEN SHAIKH: Chris Jochnick, many of the companies you examine in your report purport to engage in socially conscientious, sustainable activities. For example, this month General Mills announced a program to provide access to training and education to several hundred small vanilla farmers in Madagascar to help them produce a more sustainable and higher-quality vanilla crop. This is General Mills’ company director, Steve Peterson.

STEVE PETERSON: What we’re trying to do is actually teach them to do more value-added work on their farm, specifically curing of the bean. And that will allow them to potentially double the amount of income that they can get from growing the bean plus curing it.

NERMEEN SHAIKH: That was General Mills’ company director, Steve Peterson. Chris Jochnick, your response to what he said?

CHRIS JOCHNICK: Well, we know that some of the companies are doing good projects like that in the field, and Oxfam has actually worked with some of those companies to help them improve the way they’re doing business in the field. But this report looks at something at a broader level. It’s not just those pilot projects or smaller projects that we want to get at. We want to understand how the—not just the few hundred or few thousand farmers are faring, but how the hundreds of millions of farmers are faring throughout this global food system. And so, we didn’t try to go into the field and examine projects project by project, and we also didn’t look at scandal by scandal. We were taking a broader look at whether the companies are doing their due diligence. Are they reporting on it? Are they transparent about it? And are they forcing these commitments that they have publicly made to sustainability and to farmers—are they forcing them down through the supply chain, where we know they exercise enormous influence? And so, those—

CHRIS JOCHNICK: —are the sort of issues that we wanted to look at.

AMY GOODMAN: Associated British Foods, or ABF, was the company with the lowest score. It scored just one mark out of the 10 in its treatment of land, women, climate change. Its highest score was just three out of 10 in relation to workers and transparency. But an ABF spokesperson rejected Oxfam’s criticism. The unnamed spokesperson told The Guardian newspaper, quote, “The idea that ABF would use a 'veil of secrecy' in order to hide the 'human cost' of its supply chain is simply ridiculous. We treat local producers, communities and the environment with the utmost respect. As for transparency … our next CR report in autumn 2013 will confirm significant improvement in disclosure.” Your response?

CHRIS JOCHNICK: Well, in some ways, I think his response says a lot. His next report will apparently be more transparent. We know that none of the companies are reporting, across the commodities, where they’re buying them from, in what volumes, to what extent they’re certified or not, who their suppliers are. None of that level of transparency exists in this system, so we give failing grades for almost all the companies in terms of their basic transparency. And without that transparency, we can’t even have a conversation about whether or not they’re really being sustainable. So, companies can make those kinds of commitments, and they can do pilot projects, and they can highlight those projects on their website, but at the end of the day, if they’re not telling us who they’re sourcing from, if they’re not telling us in what volumes—

AMY GOODMAN: Chris, we have 10 seconds. What most surprised you from what you found?

CHRIS JOCHNICK: Just the general lack of disclosure across the board and the lack of basic policies on issues like land and water.

AMY GOODMAN: We want to thank you for being with us, and we will link to your report. Chris Jochnick is the director of private sector engagement at Oxfam America. The latest report, “Behind the Brands.” 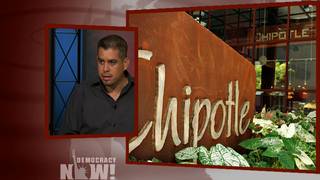