About two years ago, news reports described the State Department-funded project of Sascha Meinrath as a way for overseas dissidents to overcome repressive regimes that try to censor them by shutting down the Internet. This week a variation on the software he helped design will launch here in the United States. It is called Commotion Wireless. You can download the program on your cellphone or laptop computer in order to create what is called a “mesh” network that allows you to share Internet access with other devices on the network. “It challenges this business model that everyone has to buy their own Internet connection, and it really puts forward this notion of, well, why don’t we share resources? We can share them across our neighbors, we can share them within our offices, we can share them across entire cities,” says Meinrath, director of the New America Foundation’s Open Technology Institute. [includes rush transcript]

AMY GOODMAN: We are broadcasting from Silver Spring, Maryland, at the Freedom to Connect Conference. People have come here from across the country to discuss how to promote Internet freedom and universal connectivity.

About two years ago, news reports described the project of our next guest as a way for overseas dissidents to overcome repressive regimes as they try to censor them by shutting down the Internet. Well, this week the software he helped launch will launch here in the United States. It’s called Commotion Wireless. You can download the program on your cellphone or laptop computer in order to create what’s called a “mesh” network that allows you to share Internet access with other devices on the network. This so-called peer-to-peer communication can also challenge the centralized business model and control of Internet service providers.

To talk more about CommotionWireless.net and its implications for participatory democracy here in the U.S. and around the world, we’re joined by Sascha Meinrath, director of the New America Foundation’s Open Technology Institute. He’s also speaking today here at the Freedom to Connect conference.

Welcome to Democracy Now! So what is it that you are releasing?

SASCHA MEINRATH: So what we’re releasing is software that repurposes available hardware—cellphones, laptops, etc.—to allow them to communicate directly with one another. So, in addition to needing cellphone unlocking, we really want these technologies to be liberated in the same way that our personal computers can connect to, say, a network inside your home or office. We want to expand that to encompass an entire community and neighborhood, even an entire city.

AMY GOODMAN: So explain exactly how it works.

SASCHA MEINRATH: So you download software onto these devices. And in the same way that you connect to, say, a Wi-Fi access point or hotspot, they can communicate with one another. So imagine a spider web of connectivity whereby communications can happen over large distances and across a lot of different devices.

AMY GOODMAN: How do you—how do you launch this? You’re just putting it on your website?

SASCHA MEINRATH: Sure. Well, we’ve been developing these technologies for about a dozen years now, all open source, freely available. And we’re making them available freely via the project website as well as via any other means for transporting software. So any cellphone, any laptop that has the software can be used to virally update other devices and spread the communications.

AMY GOODMAN: Now, talk about how this all derived. Go back in time.

SASCHA MEINRATH: So the background for this project is back a dozen years ago. Before—a decade before Occupy, there was another global justice uprising within the United States, large-scale protests spanning a number of different cities. You covered it quite well here on Democracy Now! And during those protests, it became very clear that surveillance, monitoring of communications here in the United States, was pretty heavily undertaken by law enforcement. And a lot of us came up with the notion that what we really needed was a secure mechanism for communicating here in the U.S. that would not be surveilled and monitored. And that was the genesis of the project. It is now, in many ways, global in scope. We realize that that same need exists worldwide in a lot of different locations. And whereas one use case is secure communications, another one is providing low-cost connectivity. And so, the same technology developed for one use has profound implications across a number of different needs.

AMY GOODMAN: So, first it’s activists challenging the state, and then the State Department funds what they have developed and funds the project that you were involved with for dissidents overseas?

SASCHA MEINRATH: Correct. So they see the functioning of this technology being incredibly useful for spreading participatory democracy around the globe. And their focus is very much on: How do we accelerate the development that’s been happening now worldwide for the past dozen years?

AMY GOODMAN: So, explain how it’s used in places like Egypt. And what does it mean, “Internet in a suitcase”?

AMY GOODMAN: I wanted to find out what the response is from the telecom industry, AT&T not wanting this to be an issue right now because of telecom policy, saying this kind of tech should be allowed. Explain.

SASCHA MEINRATH: Sure. Well, you can imagine, if you’re a small business, in the same way that you might buy a single Internet connection and share it across all of your computers in your office, this is normal today to do this. What we’re saying is, well, let’s take advantage of that same kind of functionality and allow for people within, say, your office to make free phone calls to one another, to make free text messaging to one another. Huge cost savings. It challenges this business model that everyone has to buy their own Internet connection, and it really puts forward this notion of, well, why don’t we share resources? We can share them across our neighbors, we can share them within our offices, we can share them across entire cities—and in so doing, dramatically lower the costs for individual users to access communications.

SASCHA MEINRATH: Teens texting for free, yes. If your tween and all of their friends download this software, they can text for free in their school, dramatically benefiting parents all across the country.

AMY GOODMAN: Sascha, we just have a minute left. Where do you see decentralized communications going and the challenging of corporations and the state? Although you are funded by the state, how do they feel about the work you’re doing here?

SASCHA MEINRATH: Sure. So we’re incredibly transparent, for obvious reasons, about where our funding comes from. It comes from a variety of different sources. For us, the real import of this work is that communications, the free flow of communications, is fundamental to democracy. Without it, you cannot have participatory democracy. And so, what we’re really working on is a next iteration of participatory democracy with this technology.

AMY GOODMAN: I want to thank you very much for being with us, Sascha Meinrath, director of the New America Foundation’s Open Technology Institute, launching this new software at CommotionWireless.net.

We are streaming from the Freedom to Connect conference all day today at democracynow.org. Special thanks to our crew here at Freedom to Connect: David Isenberg, Paul Hyland, Paul Franz, Paul Brigner. And here at AFI Silver: Eileen Keegan, Tiffany Graham-Golden and John Summers. 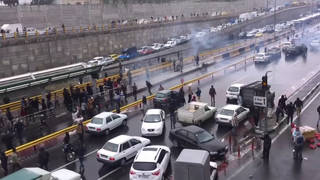