Jim Crow After Roe? How States Are Regulating Abortion Out of Existence & Widening Health Inequality

The new book, “Crow After Roe: How 'Separate But Equal' Has Become the New Standard in Women’s Health and How We Can Change That,” tackles the new landscape of restrictions on reproductive healthcare in the United States. On Tuesday, a House panel voted to advance a bill banning abortion after 20 weeks of pregnancy nationwide. Similar bans are already in place in states across the country, part of an unprecedented tide of state abortion restrictions enacted in the past few years with the goal of challenging Roe v. Wade at the Supreme Court and making abortion inaccessible and unaffordable on the ground. The laws have created a new reality in women’s healthcare: a two-tiered system where poor women, women of color and women in rural areas cannot access basic healthcare services. We’re joined by co-authors Robin Marty and Jessica Mason Pieklo, both writers for the reproductive news website RH Reality Check.

NERMEEN SHAIKH: We turn now to look at the disturbing new landscape of restrictions on reproductive healthcare in the United States. On Tuesday, a House panel voted to advance a bill banning abortion after 20 weeks of pregnancy. The bill, sponsored by Arizona Republican Congressmember Trent Franks, had previously applied only to Washington, D.C., but the all-male subcommittee voted to expand it nationwide. Similar bans are already in place in states across the country, many of them based on model legislation backed by national groups and pioneered in Nebraska in 2010.

AMY GOODMAN: The 20-week bans are part of an unprecedented tide of state abortion restrictions enacted in the past few years with the goal of challenging Roe v. Wade at the Supreme Court and making abortion inaccessible on the ground. The laws have created a new reality in women’s healthcare: a two-tiered system where poor women, women of color and women in rural areas cannot access basic healthcare services.

That’s the premise of a new book called Crow After Roe: How “Separate But Equal” Has Become the New Standard in Women’s Health and How We Can Change That. It focuses on Washington, D.C., and 11 states where laws have, quote, “practically regulated abortion out of existence.”

We welcome you both to Democracy Now! Jessica, let’s begin with you and where you begin, with the state of Nebraska.

JESSICA MASON PIEKLO: Yes. So, the book, as you said in the intro, takes a look at state attacks, and we chose to start with Nebraska because that’s really where the onslaught of model legislation originates, and not just with the 20-week ban, but also, as the book chronicles, with what was really the initial architecture of the challenges, and that was these so-called partial birth abortion bans, and focuses on why Nebraska in the first chapter was a good place for that, given the local politics on the ground and the structure of the state government there.

AMY GOODMAN: Who’s the force behind this trend across the country?

JESSICA MASON PIEKLO: Well, there’s—there are several groups, and they are legislative and policy groups and then also legal arms of those groups. So we have National Right to Life, we have Americans United for Life, and then legal advocates along the lines of Liberty Counsel and the Thomas More Center, groups that really have coordinated and consolidated resources and efforts with one single goal in mind, and that’s to either overturn Roe v. Wade and recriminalize abortion or to make it absolutely impossible to access, and therefore legal in name only.

NERMEEN SHAIKH: And what are the links to Citizens United?

JESSICA MASON PIEKLO: Oh, so that’s a fantastic question. I’m glad you asked that. One of the reasons why the book looks at the onslaught of legislation after 2010 is because there is an explosion at the state level. And that is in large part due to one of the driving forces, which is James Bopp Jr., who is the legal brains behind the challenge that created the Citizens United decision. He sparked, and his group, National Right to Life, sparked a lot of the initial campaign finance challenges and did so through socially, culturally conservative groups. And as a result of the unrestricted spending at the state level, it’s just—well, this is where we’re at right now as a result of it.

AMY GOODMAN: Robin Marty, if you could talk about the TRAP laws—that’s the Targeted Regulation of Abortion Provider laws—otherwise known as the “heartbeat ban”?

ROBIN MARTY: Actually, the heartbeat bans and the TRAP laws are two completely different sets. What we’re looking at is how there are a variety of tiers of ways of going after abortion regulations. In one case, you can ban abortion at different periods of time, so we see the 20-week bans, we see heartbeat bans, where you can ban abortion at the point in which the fetal heartbeat can be detected, which can be as early as six weeks. A lot of those we don’t think, especially heartbeat bans, will survive legal challenges. But on the other hand, we have so many states, especially in the Midwest and through the South, that only have a few clinics left or even just one clinic. And what Targeted [Regulation of Abortion] Providers do is they put unnecessary regulations in place. Either you will need to rebuild your entire structure, which is very costly, or there are admitting privileges that doctors need to go to, even though in the rare case that there is a complication with abortion, if a woman goes to a hospital, a hospital is not going to turn her down and say, “We’re not going to treat you.” But they put these in place because they act as additional barriers, so that then they can go through and pull licenses from clinics and start to eliminate clinics one by one that way so there’s no more resources for women to go.

NERMEEN SHAIKH: Jessica, very quickly, before we conclude, could you explain the title of the book, Crow After Roe?

JESSICA MASON PIEKLO: Absolutely. So, it’s an intentional harkening to the civil rights movement and Jim Crow, and that’s because what we’re seeing is a series of state restrictions that is enabled and supported by a federal judiciary who has largely upheld these restrictions and, as a result, said effectively that pregnant people have a different set of healthcare—or have a different healthcare system that they can access as a result of it. So…

AMY GOODMAN: We want to thank you both very much for being with us. Jessica Mason Pieklo and Robin Marty are the authors of Crow After Roe: How “Separate But Equal” Has Become the New Standard in Women’s Health and How We Can Change That.

This is Democracy Now! On Thursday night, I’ll be speaking at the 92nd Street Y here in New York City. I’ll be interviewing Ralph Nader on his new book, Told You So. And then on Friday and Saturday, doing the talkbacks with Jeremy Scahill after his film, Dirty Wars: The World Is a Battlefield, opens in New York, in Los Angeles, in Washington, D.C. In New York, we’ll be at the IFC theaters and at Lincoln Plaza theater starting on Friday. 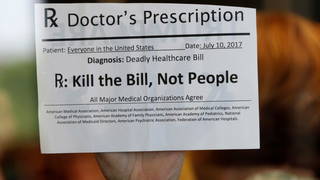