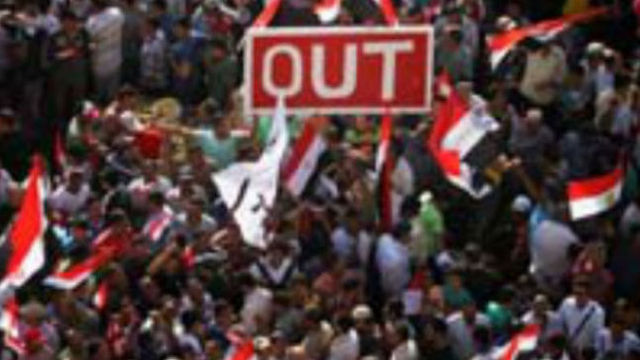 Democracy Now! correspondent Sharif Abdel Kouddous reports on the crisis in Egypt as the Army detains ousted President Mohamed Morsi and shuts down TV stations supportive of the Muslim Brotherhood:

SHARIF ABDEL KOUDDOUS: Today, July 3rd, 2013, was a pivotal day in Egypt’s history. The country’s first democratically elected president was ousted in a military coup. But this wasn’t a coup that the military launched by itself. Instead it was one that was facilitated by popular pressure, and there were scenes of jubilation across Cairo today after the military announced that President Mohamed Morsi was ousted from office and would be replaced by an interim government.

The day began with people anticipating the end of a 48-hour deadline the army had set two days ago following an unprecedented protest on June 30th—the largest in Egypt’s history. The anticipation as the countdown for the deadline approached was incredibly high. The rumor mill was going crazy, and once the deadline passed and still no army statement, people began to wonder. But then the military deployed its armored personnel carriers and deployed troops to key locations across Cairo, securing bridges and sending troops to the sites of pro-Morsi sit-ins and rallies. And at this point, most people in Egypt suspected what they knew was true, was that the army was going to oust President Morsi. And there were scenes of jubilation in Tahrir well before the statement ever came.

And the statement, when it did come, was delivered on television by the head of the armed forces, the man that President Mohamed Morsi himself appointed a year ago, General Abdel Fattah al-Sisi. He detailed a roadmap for what he called a return to democratic rule, and the head of the Supreme Constitutional Court, the highest court in the land, will be sworn in as a interim president. In fact, he was just sworn in as the head of the Supreme Constitutional Court by President Morsi two days ago, and now he’s replacing him as the state’s new ruler. There will also be early presidential elections, with the head of the Constitutional Court managing the affairs of the country during the interim period until a new president is elected. The constitution has been suspended, and there will be a committee formed that will supposedly include all sections of society and experts to review proposed amendments to the constitution and to write a new national charter. Those are the main aspects of this transition.

But basically what happened is that we have been taken all the way back to square one, back to February 11, 2011, the day that the former President Hosni Mubarak was ousted from office. All the voting and the elections that Egyptians have gone through, this complete so-called democratic transition over the past two-and-a-half years, has been cancelled completely, and we are back to square one. And so, it’s a very important time, it’s a very pivotal time, but, you know, not the entire country was celebrating today. And I went to the site of the pro-Morsi rally, which was a very different scene, a scene of silence, a morose—really a morose scene, with people in kind of quiet anger, some people shaking their fists and yelling at the helicopters circling overhead, calling them “thief,” and some more angry rhetoric coming from the stage and the speaker calling on people to engage in a sit-in for—until they can get back their legitimacy.

Going forward—and what we now know, security sources have said, is that the president—well, the former president, Mohamed Morsi, has been placed under house arrest, along with senior leaders of the Muslim Brotherhood who have also been detained. Three pro-Morsi TV channels have been taken off the air. Al Jazeera Mubasher Misr, which is a local Egyptian TV affiliate of Al Jazeera, was taken off the air. Twenty-seven people of the channel were arrested. Twenty-six of them have been [released], but the director is still in detention. And there’s unconfirmed reports of dozens of members of the Brotherhood that have been detained.

Now, the key question going forward is: What will happen to the Muslim Brotherhood and the possibility of including them in the political process? Because the exclusion of the Brotherhood, and of Islamists, in general, will lead to authoritarianism down the future, inevitably, and instability, inevitably. And it’s not a good sign that we’re seeing these arrests and this clampdown on the pro-Morsi media.

Finally, it’s important to remember that, yes, this was a military coup. But it was one that was facilitated by pressure on the streets. And it’s important to remember that what we’ve seen over the past two-and-a-half years since this revolution began was these mass mobilizations on the street that have forced people with their hands on the levers of power to act. And this is really a fight against—to destroy the authoritarian state that denies people political and economic agency. And it’s a fight against those who are fighting to protect it, whether it is the regime of Hosni Mubarak, whether it is the army, whether it is the security apparatus, or whether it is an elected government of the Muslim Brotherhood that has authoritarian tendencies and was a very exclusionary regime that had undemocratic principles.

So, you know, I think that if we look at what happened in this context, it was a revolutionary moment, but one that unfortunately could set a very dangerous precedent in Egyptian politics. There were no good options for Egyptians today. And while this is a coup, it could set a precedent for the military to be the final arbiter of power in Egypt for a while to come. But the real power, I think, lies in the hands of people, and they realize that they have this power. And these mass mobilizations that we’ve seen, these tremendous protests, these strike waves, these expressions of dissent that come in these incredible waves up and down over the last two years, have shown the people will not back down until they get some real fundamental changes in the country.

For the latest updates from Egypt visit our live page 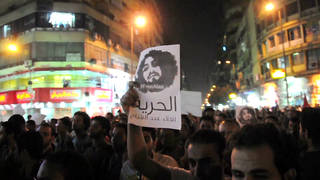