After the three-term administration of billionaire Mayor Michael Bloomberg, progressive candidates emerged as the clear winners of New York City’s primary elections earlier this week. Mayoral candidate Bill de Blasio led the Democratic field after opposing Bloomberg’s embrace of the police tactic of “stop and frisk” and vowing to take on growing inequality between rich and poor. A number of young progressive candidates also pulled off surprising wins in races for City Council nominations. “New York City is on the cusp of electing its most progressive government in 50 years,” says Democracy Now! co-host and New York Daily News columnist Juan González.

AMY GOODMAN: Well, Juan, the New York City primary just took place, and, well, the results are still up in the air, at least in the Democratic primary, and you’ve been writing about this in the New York Daily News.

JUAN GONZÁLEZ: Yes, but I think the trend is by now pretty obvious. What’s been happening is that I think that New York City is on the cusp of electing perhaps its most progressive government in the past 50 years, that you have, on the one hand, what’s gotten most of the attention is the mayoral race, where Bill de Blasio is now in the lead and most likely will be the Democratic nominee. I think he just fell—he’s just over the 40 percent threshold in defeating the several other opponents and most likely won’t need a runoff, but even if he falls below the 40 percent threshold as they count 15,000 or so absentee ballots, I think it’s likely the other Democratic contenders will unite behind him. And de Blasio really ran a very progressive race, focusing in on income inequality in New York City, the 47 percent of New Yorkers are at or near the poverty level, and talking about the need to rein in the—all the tax breaks to developers and the business community, and increase taxes on the wealthy to pay for better public education and expanded preschool. So I think that he really—his campaign really resonated with the reality that many New Yorkers are facing, and that’s why he was able to cobble together a coalition.

But the other story that hasn’t gotten a lot of attention is the—what’s happened in the City Council races, as there are 51 members on the New York City Council, and throughout the city, young progressives not only ran, but won election. And so, you had in Brooklyn, in the Bushwick and Williamsburg area, Antonio Reynoso, a young progressive Latino with a—beat an old-guard party boss, Vito Lopez, who had been—who had ruled central-north Brooklyn for years. And you had people like the first Mexican American, looks like, to be in City Council, Carlos Menchaca, in Sunset Park, also defeated an old-line Latino sort of machine candidate; and Helen Rosenthal on the Upper West Side. You had all across the city young progressives ran and won, and I think it’s really going to affect the politics of the city, that not only the mayoralty but also the City Council will be much more progressive than it’s been in decades.

AMY GOODMAN: And whoever the Democratic candidate is will take on Joe Lhota, the Republican.

JUAN GONZÁLEZ: Right. And, of course, the business and real estate community is really—doesn’t know what to do with itself right now. The real estate interests poured $10 million into getting landlord-friendly candidates into City Council and didn’t have much success. And the recent weeks’ reports said David Koch has now entered the New York City mayoral race, and he and his wife both have contributed $250,000 to one of these independent expenditure groups to support a Republican candidate, who is most likely going to be Joe Lhota, a former deputy mayor to Rudy Giuliani, a former head of the Metropolitan Transportation Authority. So Joe Lhota is most likely going to be the candidate. But it’s going to be a hard way to go for Lhota. He got 29,000 votes, winning the Republican primary on Tuesday, and the—a fourth running candidate among the Democrats, Anthony Weiner, got more votes than Joe Lhota. He got 31,000 votes among Democrats. So Lhota’s got a long way to go to be able to overcome the huge disadvantage that Republicans have in terms of Democratic registrations in the city. 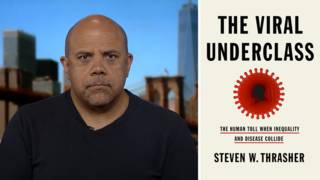