In part two of our interview, Ecuadorean Foreign Minister Ricardo Patiño discusses why President Rafael Correa is not attending this week’s United Nations General Assembly; the plight of WikiLeaks founder Julian Assange, who has spent more than 450 days in the Ecuador’s London embassy after being granted asylum last year; and Ecuador’s role this past summer in the drama surrounding National Security Agency leaker Edward Snowden and his attempt to secure political asylum. Patiño also addresses the health of former Cuban President Fidel Castro and the legacy of the late Venezuelan President Hugo Chávez.

AMY GOODMAN: Why is President Correa not addressing the U.N. General Assembly like so many world leaders are?

RICARDO PATIÑO: [translated] President Correa doesn’t have a lot of expectations about what is said in the meetings of the General Assembly. He attended one General Assembly and addressed the hall, but there were no world leaders in the room at the time to hear what he had to say. It seems like only the first speeches are given importance, and the rest… So, there’s concern about the methodology of how things are organized here. And since he had the experience that he had here in the U.N., he was, quite frankly, just frustrated, and he’s not really interested in participating in an event where nobody really seems to be interested in hearing each other.

AMY GOODMAN: Foreign Minister, what about Edward Snowden and the—what you have learned from the leaks of this NSA contractor, the exposé after exposé of surveillance inside the United States and outside?

RICARDO PATIÑO: [translated] Edward Snowden opened the eyes of the world to an international crime: the NSA’s spying on the whole world. And that’s a violation of international law. And furthermore, it doesn’t just violate international law, it violates international trust, not just of one’s friends and enemies, as you say. And that, in and of itself, is grave. In the world, there are not countries that are friends and countries that are enemies. We all deserve respect and shouldn’t be categorized as such. But in the rhetoric of the U.S. government, in that even the U.S. government’s so-called friends were respected—they wanted to know absolutely everything that was going on. So, the—what Snowden denounced, this is very useful and allows us to correct what’s been going on. And the U.N. should take take that up. Unfortunately, sometimes the power relations are such that these issues are not addressed. For example, it’s not on the agenda of the U.N. General Assembly. And that’s unfortunate.

AMY GOODMAN: President Rousseff of Brazil has canceled her state visit to Washington because of the information that has come out, based on the leaks, that she was being spied on, that the [Brazilian] energy company Petrobras was being spied on. Do you think you, here at the mission, at the embassy in Washington, that Ecuador is being spied on?

RICARDO PATIÑO: [translated] Well, I couldn’t tell you. But when I was visiting Julian Assange a few weeks ago in—

AMY GOODMAN: In your embassy.

RICARDO PATIÑO: [translated] In London, in the Ecuadorean embassy, they found a few days before my visit a hidden microphone in the office of our ambassador. And we still haven’t been able to ascertain who planted it. But we can imagine who might have put it there. The information that Snowden provided indicates that everybody is spied on. And so, one should probably assume that we’ve been spied on, as well.

AMY GOODMAN: Venezuela has offered Edward Snowden political asylum. Is Ecuador weighing this, like you have Julian Assange?

RICARDO PATIÑO: [translated] Well, let’s see. We are a very sovereign country with very firm positions, and Julian Assange is protected by asylum that Ecuador has provided him with. When the case of Edward Snowden arose, Ecuador was the first country that offered to analyze his asylum request, while many countries immediately rejected the request. Ecuador considered that it was best not to be alone in this fight, because it’s a very difficult, sticky matter, given the political landscape of the world, and we can’t ignore that fact. That’s why we spoke with the ALBA countries, and we addressed the issue of Snowden, and we told them that we thought that it was important that other countries also offer a possible asylum to him. And because of that, Venezuela, Nicaragua and Bolivia offered asylum to him directly. And we thought that was good, because Ecuador can’t carry the weight of all these issues as if we were a very powerful country. That’s not the case. That’s why we’re pleased that these other countries have offered asylum and made that decision, so that they don’t gang up on us.

AMY GOODMAN: And Julian Assange’s fate? He remains in the Ecuadorean mission in London, in the embassy in London. It’s been more than a year.

AMY GOODMAN: President Correa was just visiting with Fidel Castro in Cuba, spent several hours with him. What is Fidel Castro’s influence on Latin America and his significance? And also, if you could end, finally, by talking about the legacy of former Venezuelan President Hugo Chávez?

RICARDO PATIÑO: [translated] Well, Fidel Castro is an international figure. He is a man who managed to liberate his country from the Batista dictatorship and laid the foundation for a society that is beneficial for all of the Cubans. Unfortunately, the reaction of the United States government was to attack Cuba and to impose a criminal embargo. But the Cuban government, despite these problems, has managed to defend the life and well-being and health of its people. And not only, it has also offered international cooperation. Despite its economic limitations, it’s offered international cooperation with other countries. They offered it to Ecuador, in fact. I say it with a certain amount of concern. We would have loved that Europe and the United States offer the thousands of scholarships that Cuba has offered to Ecuadorean students to study medicine. There are 2,000 Ecuadorean students who are studying medicine in Cuba. Other countries only want to train our military personnel. That’s quite a contrast. So, that’s just a way to begin to respond to your question: What is the influence of Fidel Castro? I think it’s a moral influence. I participated in the conversations that President Correa has had with Fidel Castro. In fact, I was present at the last conversation. And Fidel Castro never offered advice to us. We talk about the state of the world and how to achieve better development, how to improve healthcare and protection of our natural resources. That’s what we talk about.

RICARDO PATIÑO: [translated] He is a bit challenged in terms of mobility. But in terms of lucidity and reasoning and his concern for world issues, it’s quite extraordinary what one learns from him. He has an incredible memory and a capacity to analyze current events and to foresee what’s going to happen. He is already 30 or 50 years ahead of the curve. But his mobility is a bit problematic.

AMY GOODMAN: And the legacy of Chávez?

RICARDO PATIÑO: [translated] The legacy of Hugo Chávez is extraordinary. After the Cuban revolution, it’s in 1998, when Hugo Chávez took office. And he was totally alone in Latin America. There were a lot of right-wing and neoliberal governments, and he would take a really strong stance in international events. And it was really hard, because he was isolated. Imagine how difficult it is to be the lone voice and have everybody against you. But, little by little, other progressive governments came to power, and now there’s many progressive governments—Brazil, Ecuador, Chile, Bolivia, Nicaragua—many other progressive governments in the Caribbean, as well, that have changed the face of Latin America. But the strength and power of the discourse and the proposals of Hugo Chávez to create the integration of Latin America is legendary. Also, he contributed to strengthening a Latin American and Caribbean consciousness about the need for greater unity. And so, that’s why we always speak of Hugo Chávez with a lot of respect and endearment, because he stood with Ecuador when times were tough, like he did with other countries. He supported our process and contributed to the dream of Simón Bolívar and contributed to making that dream a reality.

AMY GOODMAN: Ecuadorean Foreign Minister Ricardo Patiño. I interviewed him on Monday at the permanent mission of Ecuador to the United Nations. President Correa has decided not to address the U.N. General Assembly this year. You can visit our website at democracynow.org to watch more of our interview, as the foreign minister talks about the crisis in Syria, Ecuador’s controversial new media law and Patiño’s time working with the Sandinistas in Nicaragua.

This is Democracy Now!, democracynow.org, The War and Peace Report. When we come back, we head north to talk about the Keystone XL, not here in the United States, but in Canada. Stay with us. 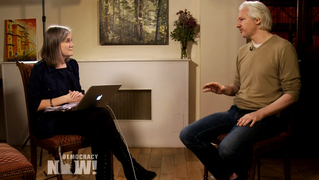