Anabel Hernández has been described as one of the most courageous journalists in Mexico. In 2010, she published a groundbreaking book linking top Mexican governmental officials to the world’s most powerful drug cartels. She received so many death threats that the National Human Rights Commission assigned her two full-time bodyguards. Despite the danger, she continued to report. In 2012, she received the Golden Pen of Freedom award from the World Association of Newspapers and News Publishers. Her own father was kidnapped and murdered 13 years ago. Her book on the Mexican drug wars, “Narcoland: The Mexican Drug Lords And Their Godfathers,” has just been translated into English. “What I found in official documents and by testimonies is that the secretary of public security, Genaro García Luna, was the most powerful chief of police in the government of Felipe Calderón. He was really involved with the drug cartels, with the Sinaloa Cartel. He was in the payroll as the same, as the most important chief of the police of the federal police,” Hernández said. “So these guys not just protect the Sinaloa Cartel, they also help them traffic drugs and money in the most important airports in Mexico.”

JUAN GONZÁLEZ: We end today’s show with a woman who has been described as one of the most courageous journalists in Mexico. In 2010, Anabel Hernández published a groundbreaking book linking top Mexican government officials to the world’s most powerful drug cartels. She received so many death threats, the National Human Rights Commission assigned her two full-time bodyguards. Despite the threats, she continued to report. In 2012, she received the Golden Pen of Freedom award from the World Association of Newspapers and News Publishers. Her own father was kidnapped and murdered 13 years ago.

AMY GOODMAN: Anabel Hernández’s 2010 book on the Mexican drug wars has just been translated into English. It’s called Narcoland: The Mexican Drug Lords and Their Godfathers. She joins us here in New York before heading back to Mexico.

It’s an honor to have you with us, Anabel.

ANABEL HERNÁNDEZ: Thanks for inviting me, and thanks for your interest in what is happening in Mexico. That’s important.

ANABEL HERNÁNDEZ: Well, first, I have to explain that I have been investigating the drug cartels for seven years. I mean, I have enough information to give my opinion about it. So, what I found is that in Mexico doesn’t exist really a war against the drug cartels. What exists in the government of Felipe Calderón was a war between the cartels, and the government took a side of that war, protecting to the Sinaloa Cartel. That’s why all the violence and crime grew up in Mexico.

JUAN GONZÁLEZ: Well, what you describe is very similar to what happened in Colombia two decades ago, when the Colombian government more or less sided with the Cali Cartel against the Medellín Cartel. Could you talk about some of what you uncovered in terms of government officials directly implicated in—at the same time that they were fighting the drug war, being involved with the cartels?

ANABEL HERNÁNDEZ: Well, what I found in official documents and by testimonies is that the secretary of public security in Mexico, Genaro García Luna, that was the most powerful chief of police in the government of Felipe Calderón, he was really involved with a drug cartel, with the Sinaloa Cartel. He was on the payroll as the same the most important chief of the police, of the federal police. So, these guys not just protect to the Sinaloa Cartel, they also help them to traffic drugs and money in the most important airports in Mexico.

AMY GOODMAN: You name a number of prominent government officials. Talk about who they are.

ANABEL HERNÁNDEZ: Felipe Calderón. What I found is, since the case of '60s until the last day of the government of Ernesto Zedillo, who was the last president that became from the party, PRI, all that governments used to protect all the cartels. I mean, the drug cartels in Mexico, as you know, is not new. It's a very old story, that that government made them very powerful.

JUAN GONZÁLEZ: Well, but the amazing story is here you have Felipe Calderón launching this war that has led to 80,000 deaths in Mexico, and yet you’re saying that his main federal police chief was involved with one of the cartels. What’s been the reaction in Mexico among the justice officials or authorities to some of your revelations?

ANABEL HERNÁNDEZ: Well, when I published his book, I really was able to put many of the proofs in the book, when it was published in Spanish, because I, of course, thought that it maybe could be very difficult to the people to understand and believe what is really happening. So, when I published it, the government didn’t say anything. Anything. They just keep quiet and still protecting to the Sinaloa Cartel. But now, I think the society in Mexico really knows that that bloody war, it was just a sham, it was fake, it wasn’t true. The federal government didn’t want to fight against the drug cartels. The federal government choose to fight against some cartels—enemies of the Sinaloa Cartel—and protect to the Sinaloa Cartel.

AMY GOODMAN: You know, I shake as you speak, Anabel Hernández, because Mexico is one of the dangerous countries for journalists to work in, especially Mexican journalists. I want to talk about your safety. But first, your father was a journalist? Can you talk about what happened to him?

ANABEL HERNÁNDEZ: Well, my father, that represents everything for me, was kidnapped and murdered in December 2000. He was a businessman. He was not a journalist. He was just a businessman. In that year, many businessmen were kidnapped for little gangs just for money. And he was murdered. When we claim for the police to justice—for justice to the police, the police—the chief of the police said that, “Well, if you want justice, if you want that we investigate, you have to pay.” Of course, we choose not pay. My family choose not pay, because you can’t buy the justice. So, until now, I don’t know who killed my father. And I learned that corruption hurts.

JUAN GONZÁLEZ: And he was—he was killed in Mexico City.

ANABEL HERNÁNDEZ: Yes, he was kidnapped in Mexico City, and his body was found in the Mexico state. It’s a very, very near place to the Mexico City.

AMY GOODMAN: What about you? You travel with two bodyguards?

ANABEL HERNÁNDEZ: Well, yes. Since I published this book in December of 2010, I receive threats of death—not from the head of the Sinaloa Cartel or the other cartels. The threats that I receive came from the chief of the police, Genaro García Luna. So I—

AMY GOODMAN: How do you know that?

ANABEL HERNÁNDEZ: Because I have an informant that called me suddenly in that December of 2010. He called me. “It’s really urgent to see you.” I met him. And he told me, “I’m coming from a meeting of police, and that police were talking about that Genaro García Luna are trying to contract some police to kill you, simulating a car accident or something like that. And he’s offering better salaries and better positions in the police if they do it.” So, that information really saved my life. And I demand—I put a demand against Genaro García Luna, and the National Commission of Human Rights ordered to put me to these bodyguards.

JUAN GONZÁLEZ: I wanted to ask you about this issue of how widespread the violence is in Mexico. About a year ago, we had Jorge Castañeda on the show, former foreign minister under Vicente Fox, and we asked him about the drug war. And he said that while it was tragic and it was a mistake of the Calderón administration, he believed it was largely a regional situation. He said Juárez is not Mexico, that most of Mexico— Mexico City and other places—people don’t have the same kind of fears that they do in the areas in the north like Juárez and Tijuana. I’d like your reaction to that and your sense of how widespread the problems have been in Mexico as a result of this disastrous, as you say, fake war.

ANABEL HERNÁNDEZ: I mean, Jorge Castañeda is just one politic in Mexico. And politics sometimes don’t say the truth. The truth is that now in Mexico there are many, many spaces under the control of the drug cartels and under—also under the control of medium gangs that kidnap people, that extortion people, and now Mexico is a very dangerous place. It’s sadly to say, because I am Mexican. But I’m a journalist. I have the duty to say the truth, that in Mexico there are many, many places worse than Ciudad Juárez.

AMY GOODMAN: What is the role of the DEA, the Drug Enforcement Administration, the U.S. agency, in Mexico?

AMY GOODMAN: Can you tell us who Joaquín Guzmán, leader of Sinaloa Cartel, is?

ANABEL HERNÁNDEZ: Well, what I found in my investigation is that he was just one—the son of one farmer. He is illiterate. He almost cannot read and write. He is a vicious man. He is alcoholic. He consume drugs. I mean, he is nobody. He have to leave the school when he was seven years old. What it’s about, my book, is how this man, that is almost nobody, now is the most powerful drug lord in the world. That is the answer that you can find in my book.

JUAN GONZÁLEZ: And he remains at large? He remains free somewhere in Mexico still?

AMY GOODMAN: You say he was escorted through the prison dressed as a government official, accompanied by conspiring government officers out to a helicopter and whisked away to freedom?

ANABEL HERNÁNDEZ: Yes. What I—what I found in the criminal case of the escape of El Chapo Guzmán is that he didn’t escape, as the official version, in the laundry car with the help of one man. He really escaped by the help of the federal government, and they put him in—he used a uniform of police and took an helicopter.

AMY GOODMAN: Anabel, what needs to be done? And what makes you so brave?

AMY GOODMAN: What needs to be done? And what makes you so brave?

AMY GOODMAN: Would legalizing drugs or decriminalizing them help?

ANABEL HERNÁNDEZ: I’m not sure if Mexico, for example, is really ready for that. We can see options. And about the second question is because, as I said, corruption hurts. The biggest problem in Mexico is the corruption. The corruption is the mother of El Chapo Guzmán and the mother of all of the other cartels.

AMY GOODMAN: I want to thank you so much for your work, for your bravery. Have a safe journey home, Anabel Hernández. Her book is called Narcoland. 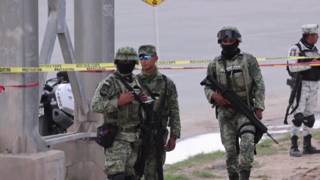