The North American Free Trade Agreement between the United States, Mexico and Canada went into effect 20 years ago this week on January 1, 1994. The massive trade pact was signed into law by President Bill Clinton amidst great promise that it would raise wages, create jobs and even improve health and environmental safety standards. Hundreds of thousands of U.S. jobs have vanished as companies sought lower-wage workers in Mexico. Meanwhile, NAFTA has generated more poverty in Mexico, forcing millions of citizens to migrate to the United States in search of work. We speak to Lori Wallach, director of Public Citizen’s Global Trade Watch and author of the new report, ”NAFTA at 20.”

AMY GOODMAN: We turn to this 20th anniversary of the North American Free Trade Agreement between the United States, Mexico and Canada, which went into effect January 1st, 1994. The massive trade pact was signed into law by President Clinton amidst great promise that it would raise wages, create jobs, even improve health and environmental safety standards. This is President Clinton speaking as he was signing the historic treaty in December 1993.

PRESIDENT BILL CLINTON: I believe we have made a decision now that will permit us to create an economic order in the world that will promote more growth, more equality, better preservation of the environment and a greater possibility of world peace. We are on the verge of a global economic expansion that is sparked by the fact that the United States, at this critical moment, decided that we would compete, not retreat. In a few moments, I will sign the North American Free Trade Act into law. NAFTA will tear down trade barriers between our three nations. It will create the world’s largest trade zone and create 200,000 jobs in this country by 1995 alone. The environmental and labor side agreements initiated by our administration will make this agreement a force for social progress as well as economic growth.

AMY GOODMAN: Well, 20 years after NAFTA took effect, it has failed to deliver on many of the promises Clinton and others made. Thousands of U.S. jobs have vanished as companies sought lower-wage workers in Mexico. Meanwhile, NAFTA has generated more poverty in Mexico, forcing millions of citizens to migrate to the United States in search of work.

Well, one group that saw much of this coming was the indigenous people in the Mexican state of Chiapas. On the same day NAFTA went into effect, on January 1st, 1994, they joined the Zapatista National Liberation Army, or EZLN, in declaring war on the Mexican government, saying that NAFTA meant death to indigenous peoples. They took over five major towns in Chiapas, with fully armed women and men. The uprising was a shock, even for those who for years worked in the very communities where the rebel army had been secretly organizing. This is Zapatista Comandante Tacho explaining the uprising in a clip from the 1999 documentary, Zapatista, produced by Big Noise Films.

COMANDANTE INSURGENTE TACHO: [translated] It was early in the morning on January 1st, 1994, when we appeared, because the conditions and the situation in which we live in these mountains. We did not take up arms to gain political post or office or some other important place. We rose up in arms because we would not die forgotten, so that people would hear our demands and not forget that in this corner of Mexico lived many indigenous people who have been abandoned for years.

LORI WALLACH: Well, not only haven’t the promises made by its proponents come true, but in most instances the actual opposite occurred. For instance, listening to President Clinton made my blood boil, because in no year of NAFTA were 200,000 jobs created. Rather, now 20 years out, one million net U.S. jobs have been lost to the growing trade deficit with Mexico and Canada under NAFTA, and there’s a list of an explicit 400,000 with Canada, 845,000 total jobs lost to NAFTA, specific workers certified under just one narrow program called Trade Adjustment Assistance that’s very hard to qualify for.

And on that end, if you want to see the actual effect of NAFTA in your community, you can go to our website, TradeWatch.org, look at the Trade Data Center. You can put in your zip code, and actually it will pop up the list of companies. A lot of them were companies that explicitly said during the NAFTA debate, “Congress, if you pass NAFTA, we’re going to create X number of jobs in Y community.” And you can actually go by the company name and see Caterpillar, GE, Chrysler promising jobs then, offshoring jobs in reality, using NAFTA’s investor protections. Now, the one place that U.S. exports did grow was in dumping subsidized corn.

Over 1.5 million campesinos in Mexico displaced. As folks know, desperate immigration from Mexico after the NAFTA wipeout increased—doubled in the years after NAFTA. Meanwhile, in the corporate tribunals, over 365,000—sorry, $365 million have been paid out to corporations attacking environmental and health laws. So even the environmental improvements didn’t happen. Poverty increasing in Mexico, job offshoring in the U.S., and that is in effect across the economy. So if you weren’t one of the people who lost your job to NAFTA, the effect of having those million people displaced from higher-wage jobs meant they were competing for the service-sector jobs in the U.S. that aren’t subject to offshoring. So the government data shows that when someone lost their job to offshoring, on average, they lost 20 percent of their income and then went into the pool of people searching for non-offshorable jobs. So even in those sectors that are growing in the service sector, wages are flat or declining, which is a key factor to this growing income inequality.

That’s the reality of 20 years of NAFTA. But despite that, now the Obama administration is trying to do NAFTA on steroids, the Trans-Pacific Partnership, which, given the record, is outrageous—can be stopped, but is pending.

AMY GOODMAN: Talk about how NAFTA passed. I mean, in this period, President Clinton was vowing to get this passed at all costs, and that’s precisely what he did. It was extremely controversial, right to the last minute. How were congressmembers, how was Congress pressured?

LORI WALLACH: Basically, there were a combination of factors. These trade agreements, like the TPP, NAFTA 20 years ago, are like the corporate Christmas tree. This is the one piece of “legislation” that every corporate interest loves. It jacks up medicine prices with patent extensions for Big Pharma. Big Content loves it because they’re like SOPA-type copyright rules. The chemical and pharmaceutical companies like it because they have actual rights to not be regulated and inspected. The oil and gas companies love it because it gives them absolute rights to natural resources. The chronic job offshoring companies love it because it gives them new investor protections to offshore. So they all lobbied Congress, squeezed Congress.

But in the end, the reason NAFTA passed was Fast Track, the arcane Nixon-era procedure that allows the executive branch to write legislation, stuffing in all kinds of goodies unrelated to the trade agreement to buy congressional votes, special deals. And then that goes through Congress with no amendments allowed, very quickly, yes-or-no vote. So, if you don’t like TPP, if you don’t like what 20 years of NAFTA has done, the mission now is we have to make sure there is never this Fast Track legislative luge run, because it gets a mechanism for something as outrageous as these kind of agreements to basically get railroaded through Congress, even though, as, Amy, you said, there was enormous public opposition, which, by the way, the U.S. public’s opposition to NAFTA has only gotten larger, stronger, more diverse. Democrats’, Republicans’, independents’ majorities oppose NAFTA. But here we go again with the TPP.

AMY GOODMAN: President Obama said he wants to fast-track the TPP. Explain what that means.

LORI WALLACH: So, under Fast Track, it’s a mechanism that Nixon cooked up in the '70s where Congress delegates away its constitutional authorities. So, under Fast Track, if that were to be passed, Congress basically would give away all of its ability to control the content of a trade agreement and to control what's in a bill that would come to Congress. So, if there is Fast Track, say, for TPP, President Obama could sign the agreement before Congress votes, regardless of what the contents are and whether or not it meets what Congress said should be in there—and the U.S. Congress, under the Constitution, has exclusive authority over trade; despite that, delegate it away—president would be able to sign it before it was voted on and railroad it through Congress, legislation written by the executive branch, not amendable in congressional committee, packed with who knows what other things that you wouldn’t want have going through Congress, yes-or-no vote on the floor of the House 60 days after it’s submitted, 90 days in the Senate, no amendments allowed, limited debate. It is literally like a legislative luge run.

And it delegates away all of the powers for Congress to have checks and balances against the executive branch, using “trade negotiations” to rewrite wide swaths of U.S. non-trade law. Now here’s the thing. It’s gotten so unpopular, Fast Track, with Democrats and Republicans, that in the last 18 years since NAFTA and the World Trade Organization, it’s only ever been in effect for five years. So Obama, when he was a candidate, said he’d replace it—a more democratic, open way to do trade agreements. So, basically, a trade agreement could pass—if it was good, you wouldn’t need this extraordinary, obscene procedure. Only bad trade agreements need the Fast Track. But now he’s back asking for Congress to actually give him this extraordinary delegation of its authorities, and, frankly, giving away their ability to represent us and our interests.

And that’s going to be the knockdown, drag-out trade fight that’s going to start next week. Legislation to establish Fast Track will be submitted. Congress has to actively give away this authority. So, if this does not sound like a good idea to you, make sure your member of the House of Representatives, Democrats and Republicans alike—151 Democrats, 27 Republicans have already said, “Basta! No more Fast Track.” If a majority says no, we’re not going to have railroading of these bad trade agreements. And for more details on the history of Fast Track, you can go to TradeWatch.org, our website. And among other things, I have a new book on the history of Fast Track and what’s a better way of doing trade policy.

AMY GOODMAN: We’re talking to Lori Wallach of Public Citizen. When we come back from break, we’ll also go down to San Cristóbal de las Casas in Chiapas, Mexico, to the heart of, well, where the Zapatistas rose up 20 years ago. Stay with us. 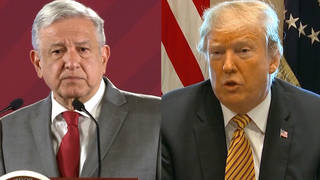