Watch an exclusive excerpt from our 2004 interview with the legendary folk singer and activist Pete Seeger, who died Monday at the age of 94. We searched our archives and found Seeger’s description of the Peekskill Riots of 1949, when he and the singer and actor Paul Robeson were attacked after they performed.

Click here to see all of our interviews with Pete Seeger over the years.

Watch a related interview with historian Will Kaufman, author of the book, Woody Guthrie, American Radical. He describes the singer’s experience at the Peekskill riots, and sings one of Guthrie’s songs about the incident.

PETE SEEGER: Well, Paul had sung for a wonderful Unitarian couple a small benefit concert for two years, and then they thought it could be a bigger concert, and they got a bigger place than their farm, just north of Peekskill. Well, a man came up from Washington. He said, “This man Robeson loves the Russians. He doesn’t love America. And he’s coming here to sing. I think you know what to do about it.” And he went back to Washington. He didn’t need to say anything more. In other words, whatever rough stuff they did, they wouldn’t get any trouble from Washington about it. So the first concert did not take place. The people setting up the chairs were beaten, and the literature was all burned. It was a benefit for the Civil Rights Congress, which was a lefty outfit.

Well, Robeson got on the air, said, “It’s America. I have a right to sing. I’m going to sing.” And this time it got an even bigger place, because with all this free publicity, some 20,000 people showed up. And this time the police let people in. And we congratulated ourselves on how it’s America, and they didn’t break up the stage or anything. Two thousand union members, mostly Local 65 warehouse workers, stood all around, arm in arm, wouldn’t let anybody in who didn’t have a ticket. And I sang a couple songs. A man—ooh, what was his name? I can’t remember his name. I can’t remember anybody’s name now; I’m going senile—played some beautiful classical piano, and then Robeson sang for an hour.

When finally our car got to go out, I saw some glass in the road, and I said to my family—I had two little babies, my wife and two friends and my father-in-law, who came along with us—he says, “I want to make sure that those babies are safe.” And I saw a little glass. I said, “Uh-oh, be prepared to duck. Somebody may throw a stone.” Well, it was the understatement of the century. Around the corner was a pile of stones, each about as big as a baseball, and a young man heaving them with all his force at every car that came by. And around the corner was another pile of stones and another young fella heaving them. There must have been 15 or 20 piles of stones before we got into Peekskill, and that was it.

There was a policeman standing about 50 feet beyond a stone thrower, and I stopped the car and tried to get the window down, but it was so splintered I could only get about an inch down. And I hollered, “Officer, aren’t you going to do something?” And all he did was say, “Move on! Move on!” In other words, he knew all about it. And I found out later it had been planned by Ku Klux Klan members in the police department. That’s what I was told by somebody who should know, because his father was deeply involved in it.

PETE SEEGER: Well, one man lost his eyesight. Paul Jr. could have been lynched, because he has a white wife. And they were prepared to lynch him. And they almost lynched another black man who had a white woman with him. That’s another story, but the interesting thing is Peekskill is a different place today. And it’s been a long, hard struggle, but things have gradually changed. Who knows? Who knows? I say it’s still America, and I don’t think what happened in Germany will happen here, in spite of the control that some people have over so much of the media. 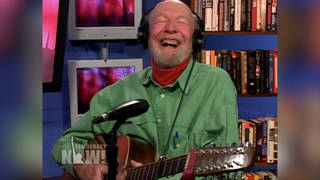