New York state is poised to become the latest state to loosen restrictions on marijuana usage. This week, Gov. Andrew Cuomo will reportedly announce a plan to use his executive power to allow 20 hospitals across the state to prescribe marijuana to certain patients. The governor’s surprise reversal on medical marijuana is part of a nationwide shift in drug laws. Last week, the world’s first state-licensed marijuana retail stores opened in Colorado to long lines of customers. Possession and private use of marijuana has been legal in Colorado over the past year, but it will now be legally produced and sold, as well. Around three dozen stores have been licensed to sell to customers. We speak to Gabriel Sayegh, the director of the Drug Policy Alliance’s New York policy office.

StoryJan 16, 2018“When They Call You a Terrorist”: The Life of Black Lives Matter Co-Founder Patrisse Khan-Cullors

AMY GOODMAN: New York is poised to become the latest state to loosen restrictions on marijuana usage. Governor Andrew Cuomo will reportedly announce a plan this week to use his executive power to allow 20 hospitals across the state to prescribe marijuana to certain patients. The governor’s surprise reversal on medical marijuana is part of a nationwide shift in drug laws. Last week, the world’s first state-licensed marijuana retail stores opened in Colorado to long lines of customers. The first person to make a purchase was Sean Azzariti, an Iraq War veteran suffering from PTSD. Azzariti spoke to reporters, along with marijuana advocate Betty Aldworth.

SEAN AZZARITI: Now I get to use recreational cannabis to help alleviate my PTSD, and it’s a stepping stone for other states to help other veterans, as well.

BETTY ALDWORTH: In Colorado we expect almost $400 million in sales next year. And across the nation, the marijuana industries will create $2.34 billion of economic activity.

AMY GOODMAN: Possession and private use of marijuana has been legal in Colorado over the past year, but it will now be legally produced and sold, as well. Around three dozen stores have been licensed to sell to customers.

GABRIEL SAYEGH: Good morning, Amy. Thanks for having me.

AMY GOODMAN: Talk about the significance of the announcement, both that Andrew Cuomo will be making this week, the governor of New York, as well as what’s happened in Colorado.

GABRIEL SAYEGH: Well, Cuomo’s announcement is enormous. It has significance on at least three levels. The first is that here’s a governor who has been long opposed to medical marijuana, and that opposition has provided cover to the state Senate to not do anything at all. The state Senate has said, “Well, we don’t want to pass a bill if the governor is not going to sign it, so we’re not going to do anything.” And they’ve been saying that for a long time. The governor’s turnaround on this, therefore, is significant because he’s saying, “I support this wholeheartedly. I’m behind it.”

But he went further. He said, “I want to get something done in New York.” And he gave us assurances, his office, that they know that New York needs to have the most sophisticated and well-run medical marijuana system in the nation. But the Senate has refused to act. And in the interim period, the governor is doing something that no other governor has done: He’s using his executive authority to move a program forward, in the meantime, until we can you get comprehensive legislation that we need. And that’s significant here, and it’s going to be a game changer in New York.

AMY GOODMAN: So, explain how it will work in New York.

GABRIEL SAYEGH: Well, the governor is drawing on a 1980 law that was passed—and 31 other states passed these types of laws back then—that allows for states to run a limited program allowing some people to access medical marijuana. Now, the New York program ran for a while here, and it was hospitals that distributed marijuana to some patients. That program was shut down in the early '90s, and no other state has that program running today. It's why states moved forward to build comprehensive systems that we see today in 20 states across the country.

What the governor is going to do is revive that program from 1980. Now there’s limits to it. The program may not—is likely not, anyways, to serve all the patients in New York who need medical marijuana. But the point is the governor does not have to go through the Senate in order to start this program running now. So what that means for us is, the governor is going to move forward, within the executive authority that he has, to begin building the regulatory system in the state of New York. That means that we need to get the ball rolling in the Legislature to pass the comprehensive legislation that patients need.

AMY GOODMAN: This is an usual change that you’ve seen for Governor Andrew Cuomo.

AMY GOODMAN: Explain where he was and where he is now.

GABRIEL SAYEGH: Well, the governor was long oppositional. He said, “I’m opposed to this. I’m not going to do it.” Last spring, we began to see a small shift. He said, “I’m not there yet, but I’m looking into this.” And it’s clear that they did do the research—they looked into this, and they did so quite deeply—because his turnaround is remarkable. And to his credit, he’s not just saying that he supports medical marijuana; he’s saying he’s going to do everything within his authority, right now, to get the ball rolling.

But both the governor understands, as do we and all the patients that we work with, that the program that he’s going to be able to start through the Department of Health with his authority, without going through the Legislature, is likely not going to be sufficient for the patients in need across the state. It’ll just get the ball rolling. It will hopefully help some people. But a lot of the details remain unanswered.

AMY GOODMAN: Talk about Colorado and what happened there.

GABRIEL SAYEGH: Well, the people of Colorado voted to end marijuana prohibition in 2012, as did those in Washington. This is historical and unprecedented, really. Colorado became the first jurisdiction in the world to have a modern system where adults can go in and buy marijuana for recreational purposes. That’s what’s just occurred in Colorado. What’s interesting about Colorado and Washington is that the voters there had an opportunity to go to the polls and voice their opinion, and they did so, and they did so overwhelmingly in support of ending prohibition. We don’t have that option here in New York. And in many areas in the Northeast, we don’t have that option. But in the states that do, we’re going to see additional voter referendum on the ballots in 2014 and in 2016 and going forward, where voters will have an opportunity to have their voice heard. And for those states like New York, where we have to move through the Legislature, we’ve got to start with programs like medical marijuana and decriminalization, because we have to make sure that patients have access to the medicine that they need and that we’re not allowing this drug war to rage on and impact hundreds of thousands of Americans, particularly young men of color.

AMY GOODMAN: Explain what Colorado can and can’t do right now.

GABRIEL SAYEGH: Well, right now, if you’re an adult 21 years of age and older, you can go in and purchase small quantities of marijuana for your personal use. You cannot use it in public. It has to be done in the privacy of your own home. That’s significant. That’s not happening anywhere else in the country or in the world, not like this. And that’s what’s going on in Colorado and will soon be happening in Washington.

AMY GOODMAN: When in Washington?

GABRIEL SAYEGH: Washington will roll out their program this year. And so, by the end of 2014, both Washington and Colorado will have legal systems, as well as Uruguay, which, as a nation, just passed a legalization bill, the first nation in the world to do so. And other nations are undoubtedly going to follow suit here.

PATRICK KENNEDY: Well, I’m also concerned about the minority community that’s now going to be targeted by these marijuana producers, because you look at the alcohol industry in this country. I’ll tell you what. More, you know, alcohol distributors are in minority neighborhoods by a factor of 10. I can’t even begin to tell you what the latest numbers are. You’re from the West Coast; you know what L.A. looks like.

PATRICK KENNEDY: Forget about it. There isn’t an equal—you know, and so, they have—it is insidious.

AMY GOODMAN: That’s Patrick Kennedy, the former congressmember, who suffered from addiction himself.

GABRIEL SAYEGH: Yeah, I’ll tell you, with all due respect to Mr. Kennedy, what’s insidious is this nation’s war on drugs and the fact that we allow hundreds of thousands of Americans, predominantly young men of color, to be arrested and roped into the criminal justice system and marked with a criminal record for the rest of their lives. New York is the marijuana arrest capital of the world. We arrest more people in this state than any other state in the country. We arrest more people in this city. It’s the number one arrest in New York City, marijuana possession. And overwhelmingly, these are young men of color, black and Latino men, who are being arrested, even though it’s young men that look like me who are the predominant users of marijuana. Now, if Mr. Kennedy was actually concerned about communities of color in this country, then he would be speaking about the devastation of mass incarceration and mass criminalization and the devastation of the war on drugs. And frankly, I find it absolutely insidious, to use his term, that they would begin to talk about these hypothetical situations comparing marijuana and alcohol, when alcohol causes thousands of deaths every year. Marijuana has never caused one. And you’ll hear from Dr. Hart later in the show, I think, more about this on the science side. But it’s ridiculous what it is that they’re talking about. And that kind of scare tactic is not what we need today. And if they really care about communities of color, then they should advocate for ending the war on drugs.

AMY GOODMAN: Gabriel Sayegh, I want to thank you for being with us—

GABRIEL SAYEGH: Thanks so much, Amy.

AMY GOODMAN: —director of the Drug Policy Alliance’s New York policy office. When we come back, we’ll be joined by Dr. Carl Hart. A Neuroscientist’s Journey of Self-Discovery that Challenges Everything You Know About Drugs and Society, that’s the subtitle of his book, High Price. You may be very surprised by what he says. Stay with us. 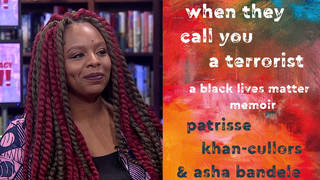 “When They Call You a Terrorist”: The Life of Black Lives Matter Co-Founder Patrisse Khan-Cullors