“The same Republican leaders who decry any mention of amnesty for undocumented immigrants are more than ready to grant amnesty to corporate tax dodgers,” writes Juan González in his latest New York Daily News column looking at the renewed push to give tax amnesty to General Electric, Apple, Microsoft and Pfizer. Over the past decade, multinational companies have funneled more than $2 trillion in profits out of the United States and parked it overseas. Much of it is labeled “deferred taxes” and invested to make more money. They keep it overseas to evade paying our 35 percent federal corporate tax. Meanwhile, they are lobbying fiercely in Washington for a huge one-year tax reduction to only 5 percent before they’ll agree to repatriate their money.

AMY GOODMAN: Before we move on to our Democracy Now! exclusive, Juan, well, this is the end of election week, and you did a very interesting piece in the New York Daily News about the issue of immigration.

JUAN GONZÁLEZ: Yeah, well, my column in today’s paper counterposes the Republicans saying that there will be a war if President Obama moves forward on his promise of an executive order on immigration reform. The Republicans don’t want amnesty or some kind of amnesty for undocumented immigrants, but they immediately have said after the election that they want amnesty for corporate America. One of the big issues they’re going to be pushing forward now, in terms of tax reform, is this amnesty or holiday for repatriated profits from corporations around the world. About $2 trillion are sitting overseas—money of Microsoft and Pfizer and Apple and General Electric. They don’t want to bring it back into the country because they’d have to pay the 35 percent corporate tax. So, the Republicans are pressing. And President Obama, in the press conference when he was asked after the election, seemed open to the idea of reducing that tax for one year to maybe 5 percent, which is what corporate America would like, but he wants in exchange that money used for infrastructure investment. It’s still going to be a huge windfall for corporate America. They’ve been lobbying fiercely for it. And right away, the Republicans want amnesty for that, but they certainly don’t want it for immigrant workers who’ve been undocumented living in the country, many of them working hard and staying out of trouble for decades. So, we’ll see how the Democratic Party and President Obama responds to the choices on this amnesty issue.

AMY GOODMAN: And we’ll link to your article at democracynow.org. 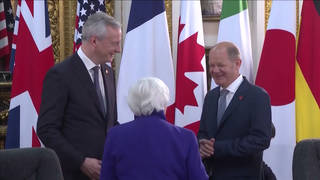