For the first time ever, delegates at the U.N. Climate Change Conference are talking about entirely phasing out fossil fuels by 2050, setting up a showdown with the energy industry that profits from their extraction. We speak to Jamie Henn of 350.org about the state of the U.N. talks, the world’s growing divestment movement, and President Obama’s comments casting doubt on the Keystone XL this week on “The Colbert Report.”

AMY GOODMAN: Jamie, talk about what those decisions are and what you see as something that has changed, for example, in the text in the agreement that may soon come out.

JAMIE HENN: One of the most interesting things that’s happening in the text right now is discussions about this long-term goal of where this treaty is really headed. In the past, it’s just been put in, in terms of temperature targets or percentage reductions. Now, for the first time, delegates are really talking seriously about phasing out fossil fuels completely by 2050 and going to zero carbon emissions. That’s the type of target that begins to push this process into the realm of reality and begins to get more people potentially engaged to be seeing this process for what it is, which is really a showdown with the fossil fuel industry.

JAMIE HENN: It’s striking. I think it’s been a real change in the rhetoric and the politics of this meeting, and I think it comes from the fights that have been happening outside of it, around fossil fuel divestment, around Keystone XL. That has changed the type of discussion that’s underway. And it’s powerful, and I think it sends a really important signal not only here in the talks, but to investors, to banks, to others that are watching it. People are getting a little bit nervous that maybe governments are finally getting serious about regulating the fossil fuel industry and that it’s time to start moving money out of the problem and into real solutions.

AMY GOODMAN: I wanted to turn to President Obama—this was Monday night—appearing on The Colbert Report, talking about the Keystone XL pipeline.

PRESIDENT BARACK OBAMA: We’ve got to make sure that it’s not adding to the problem of carbon and climate change, because, you know, these young people are going to have to live in a world where we already know temperatures are going up. And Keystone is a potential contributor of that. We have to examine that, and we have to weigh that against the amount of jobs that it’s actually going to create, which aren’t a lot. Essentially, this is Canadian oil passing through the United States to be sold on the world market. It’s not going to push down gas prices here in the United States. It’s good for Canada. It could create a couple of thousand jobs in the initial construction of the pipeline, but we’ve got to measure that against whether or not it is going to contribute to an overall warming of the planet, that it could be disastrous.

AMY GOODMAN: There you have President Obama in perhaps his strongest statement about the Keystone before the decision is announced. Jamie Henn, talk about the significance of what he said—on this comedy show.

JAMIE HENN: Yeah. Well, I think, as usual, Colbert is making news and breaking headlines. I think it’s a really good sign. I think there’s been a pendulum shift in momentum right now against Keystone XL. I was on a press call and heard a Wall Street Journal reporter asking, “It seems like now the president is going to reject the pipeline. What’s your response?” We’re trying to not read too much into the tea leaves. We need to keep pressure on and continue to push the president. But it seems like things might be turning in our favor.

JAMIE HENN: Well, we’re waiting today. Today is one of the first days where there could be a Supreme Court decision on whether or not the route in Nebraska is legal, if the governor of Nebraska—

AMY GOODMAN: The route of the pipeline.

JAMIE HENN: The route of the pipeline. So what happened is, the governor of Nebraska approved a route of the pipeline, but it turns out he doesn’t have the authority to do that. So landowners are now challenging him and challenging the legality of the route. A decision likely won’t come today, but it could come any Friday between now and—it’s expected to come by the end of the year. So this is a key moment. Once the decision is made in Nebraska, then the president will either have the information he needs, that this route is illegal, and can go ahead and reject the pipeline based on that, or, if the route is approved, will go back to the State Department process, where we’ve been for the last few years and need to continue to push them to really take a closer look at the climate impacts of this project.

AMY GOODMAN: The fossil fuel divestment campaign, Jamie Henn, if you can talk about how it’s grown and how significant this is, and do you see this weighing in? Mike Burke of Democracy Now! just asked the secretary-general, Ban Ki-moon, about the divestment movement. And at the beginning of his statement, before he sort of spoke in a very diplomatic way, he talked about its importance.

JAMIE HENN: Yeah, I think it’s had a huge impact on this process. That was one of the most surprising things for me, coming here, was seeing how many people are talking about divestment and how it’s really begun to frame this debate in a very different way. Just yesterday, the U.K. energy minister, Ed Davey, said that we should be regulating companies to look at how much money they have in the fossil fuel industry, because of the risk it not only poses to the planet, but also to the broader economy. The divestment movement, the work that students are doing on the ground, that push is beginning to really push this process in new ways.

AMY GOODMAN: And for those who aren’t familiar with it, what it is doing?

JAMIE HENN: The goal is to target public institutions and ask them to take their money out of the top 200 fossil fuel companies. This February, we’re hosting a big global divestment day of action, where people will challenge banks, colleges, religious institutions to begin to put their money where their mouths are and take money out of those companies and really begin to reinvest it into climate solutions.

AMY GOODMAN: What can we expect, in the next 30 seconds, if you could say, to come out of the end of this conference?

JAMIE HENN: Well, it’s going to be a couple—probably another all-nighter tonight, so we’ll see what happens. Here’s what we need: strong signals on finance, that real money is beginning to put on the table for climate; keeping those long-term goals in the text around phasing out fossil fuel emissions; and beginning to have real clarity about what needs to be in the document, as we head towards Paris next year.

AMY GOODMAN: Jamie Henn of 350.org, founder and communications director of the group. His new piece for The Huffington Post is called “The Climate Talks Find an Enemy at COP20: The Fossil Fuel Industry.” We’ll link to it at democracynow.org. When we come back, a group of unionists, of labor leaders, are here, deeply concerned about Keystone. When we come back, we’ll talk about Keystone in the COP. Stay with us. 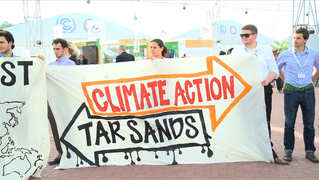