Pablo Solón on COP 20 and Carbon Markets: This is a New Mechanism to Commodify Nature

“The carbon market is a mechanism to keep polluting if you’re able to pay,” says Pablo Solón of the global agreement to reduce greenhouse gas emissions under negotiation at the United Nations Climate Summit in Lima, Peru. Solón is Bolivia’s former ambassador to the United Nations. In our extended interview, he discusses the new draft text released at the summit, and contrasts it with the approach taken by the International Rights of Nature Tribunal, on which he is a presenter.

Watch Part 1 of this interview.

AMY GOODMAN: This is Democracy Now!, democracynow.org, The War and Peace Report. I’m Amy Goodman. We’re broadcasting live from Lima, Peru, from the COP 20, from the U.N. Climate Change Conference, where over 190 countries have come to negotiate around the issue of climate change. Our guest is Pablo Solón—this is part two of our conversation—former Bolivian ambassador to the United Nations, a former chief climate negotiator for Bolivia, but now the director of the Focus on the Global South, based in Bangkok, Thailand.

The text that has come out, can you decipher it for us?

PABLO SOLÓN: Well, the text, when it comes to emission cuts, is not ambitious at all. When it comes to finance, it’s also not ambitious. We are speaking about finance for developing countries that will be less than $50 billion a year. But when it comes to carbon markets, there is a development on this issue. Now, the key question is: Are carbon markets going to fix the problem of climate change, or they are going to worsen the problem? Now, carbon market is a mechanism to keep polluting if you’re able to pay, if you’re able to buy a carbon credit. So, the logic of carbon markets is, I have to cut my emissions, but if I don’t do it, I can buy from a developing country a certificate of emission reduction and say, “OK, I bought it, therefore I already have reduced.” So, it’s a way to cheat nature, because in reality what you need to do is reduce emissions, but through this mechanism, many of the emission pledges of developed countries will not really be done. They will not really cut. They will just buy, at very cheap prices, carbon credit from projects in the developing world.

The second issue about the carbon market is that now what they want to do is to have more carbon market, not only on forests—that is called REDD—but also on soil—that now is called “climate-smart agriculture.” And now they want—

PABLO SOLÓN: Reduction of emission of deforestation and degradation of forests. So, let’s say you cut 100 trees every year, and you say, “This year, instead of cutting 100 trees, I’m only going to cut 90 trees.” So, I can put into the market the carbon that those 10 trees, that you’re not going to cut, now are not going to be emitted. Well, this is very perverse, because it means you are cutting already 100 trees, and we are going to give you a prize because you’re going to cut less. What happens with the country or the community that doesn’t cut at all? They cannot sell carbon credit. So, many are beginning to cut trees in order to be able to reduce the deforestation. That logic applies also to the logic of blue carbon and climate-smart agriculture.

That is why there is a very strong campaign, and there was here a tribunal on the rights of Mother Earth in Lima saying that this is a new mechanism to commodify nature. This time what they want to commodify is not the material part of nature. It’s not the wood of the tree. It is the function that the forest has capturing and storing CO2. So, we’re in a new process of commodification of the functions, of the processes of nature. This is what is called environmental services, ecological services. And this is the new financial market, the new bubble that is going to be created, that will make a lot of money for some companies, but that will worsen the situation of climate in the world.

AMY GOODMAN: There is going to be a major climate march again here, and this is on Wednesday. Interestingly, those who may not be marching, but speaking—you can let me in on this—the presidents of Ecuador and Bolivia, in many ways considered progressive, but indigenous people have flocked to the U.N. conference today, the climate summit, protesting their presidents, saying that they are exploiting the lands of indigenous people. Can you talk about their role—President Morales, your president in Bolivia; President Correa in Ecuador? And what’s the conversation that’s been going on?

PABLO SOLÓN: Well, the issue is that Bolivia and Ecuador were two countries that led the defense of the rights of Mother Earth, and now we are seeing that President Correa wants to drill in the Yasuní-ITT. That is a national park that was supposed to be preserved. And we are hearing President Evo Morales saying that he wants to have nuclear energy in Bolivia, when the Rights of Mother Earth clearly say in one of its articles that no nuclear waste can be thrown to Mother Earth. So, there is a very big movement from indigenous people and also from civil society saying, “We want you to stick to what you said, to your promise, to what the law says, to what the Constitution says,” in the case of Ecuador.

So that means we need to respect nature, and we need to give the example to the rest of the world that there is another way to solve the problem—that is, to find and seek for a balance with the Earth system—because in reality the problem of climate change is not a problem of emissions. It’s more than that. It’s a problem of how we treat nature. Do we treat nature as an object, as a thing that we can break, we can do whatever we want? Or are we beginning to recognize that it’s a living organism, that we have to respect the vital cycles of nature, the vital cycle of carbon, of water, of nitrogen? And therefore, our societies have to preserve those vital cycles, not commodify them, not distort them through extractive industries. So, this is the main appeal from, I would say, civil society, social movements in different parts of the world, but also in Bolivia and in Ecuador.

AMY GOODMAN: So what is going to happen? Are the presidents going to march?

PABLO SOLÓN: As far as I know, they are going to speak in the closing event in the march. And, of course, there are already different statements from different groups saying, “We ask the presidents to change their position and to not reinforce what we are seeing from the side of the developed world, when it comes to more extractivism.”

AMY GOODMAN: And what about the repression that accompanies the conflict with indigenous people?

PABLO SOLÓN: This is a problem, a very big problem, because the more you develop extractive industries that affect the territory of indigenous people, indigenous people will organize and mobilize against them. And in order to protect the investment of corporations, you will use force, and there will be an increase of repression. We are seeing this in Latin America. We are seeing this in Asia. I’m amazed of what is happening in the case of Asia. The repression, in order to control the territory of indigenous, of peasants, of rural communities, is so big, and at a scale that is even bigger than what we are seeing in Latin America. To give you just an example, they want to build an industrial corridor from Delhi to Mumbai, 1,500 kilometers, industrial corridor. But they want to grab the land, 150 kilometers one side, 150 kilometers the other side, along 1,500 kilometers. That is going to be the biggest displacement of peasant rural communities in the history of the world.

AMY GOODMAN: Do you get more or less pessimistic, in these last 10 seconds?

PABLO SOLÓN: No, I am really optimistic. I think that humanity will not commit suicide, that we have the strength and the capacity to change this future for the safe of humanity and nature.

AMY GOODMAN: Pablo Solón, I want to thank you so much for being with us. Pablo Solón is the director of Focus on the Global South, former Bolivian ambassador to the United Nations. I’m Amy Goodman. Thanks for joining us. 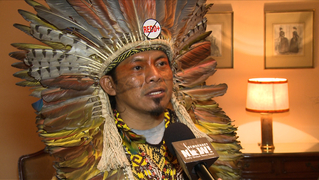