N.C. Governor No Longer Works for Duke Energy, But After Coal Spill, Is He Doing Their Bidding?

In one of the worst coal ash spills in U.S. history, up to 27 million gallons of contaminated water and 82,000 tons of coal ash spilled into North Carolina’s Dan River after a pipe burst underneath a waste pond. That is enough toxic sludge to fill more than 70 Olympic swimming pools. The river has turned grey for miles, and environmentalists say they have found arsenic levels 35 times higher than the maximum set by federal regulators. Did state regulators intentionally block lawsuits against Duke Energy in order to shield the company where Republican Gov. Pat McCrory worked for 28 years? We speak to Amy Adams, who recently resigned from the North Carolina Department of Environment and Natural Resources in protest of changes at the agency last year. She now works with the organization Appalachian Voices.

JUAN GONZÁLEZ: We turn now to North Carolina, the site of one of the worst coal ash spills in U.S. history. Earlier this month, up to 27 million gallons of contaminated water and 82,000 tons of coal ash spilled into the Dan River after a pipe burst underneath a waste pond. That’s enough toxic sludge to fill more than 70 Olympic swimming pools. The river has turned grey for miles, and environmentalists say they’ve found arsenic levels 35 times higher than the maximum set by federal regulators.

Now, a new report has raised questions about the relationship between Duke Energy and the administration of Republican Governor Pat McCrory, who worked at Duke for 28 years. The Associated Press has revealed that over the last year, following the election of Governor McCrory, North Carolina’s environmental agency has blocked lawsuits over Duke’s coal ash ponds three times, eventually shielding all 31 ponds from potential lawsuits. The agency proposed settlements for a fraction of Duke’s worth that did not require Duke to clean up the ponds.

AMY GOODMAN: Now, North Carolina regulators are seeking to delay one of those agreements in what environmentalists call an attempt to buy time until the public outcry subsides. Beyond his work for Duke Energy, Governor McCrory’s campaign and affiliated groups have received more than a million dollars in recent years from Duke, its political action committee, executives and their immediate families. The state agency has also admitted it wrongly declared arsenic levels in the Dan River safe after the spill. Arsenic in one sample was actually four times higher than maximum levels for prolonged contact. Governor McCrory recently visited the site of the accident.

GOV. PAT McCRORY: Duke water quality standards and some of our side sampling at this point in time are pretty confident that the water is very safe, and we are just finalizing some further tests.

AMY GOODMAN: North Carolina Governor McCrory’s former employer, Duke Energy, has apologized for the spill, pledged to clean up its toxic waste. Democracy Now! invited Duke Energy on the show, but they declined, citing weather difficulties and outage concerns that have tied up their staff in North Carolina.

Well, for more, we’re joined by Democracy Now! video stream by Amy Adams, coordinator for Appalachian Voices, a North Carolina campaign. From 2004 to last year, she was a regional supervisor at the state environmental agency in charge of enforcing surface water standards. She resigned in protest of changes at the agency last year. She’s joining us from Boone, North Carolina, in the Blue Ridge Mountains.

Amy, welcome to Democracy Now! Talk about the significance of what happened, this ash spill, and what you feel needs to happen and why you quit.

AMY ADAMS: Right. Well, like you said, I left partly in protest. There were some very significant changes that happened in 2013 in the agency. First, we had the Regulatory Reform Act, which caused us to go—or required us to go and look at our regulations, but what it did was it prioritized our environmental regulations first. And of our environmental regulations, arguably our most strongest are our water protections, and those were the ones that were the first targeted.

There were other changes in the administration, such as budget cuts, staff reorganization, limits on DENR’s power, trying to limit local authorities’ ability to regulate their own environmental standards. So there were a lot of changes that went on.

And, of course, you’ve heard me speak before about John Skvarla, redefined our customer, moving away from treating the resource and the citizens of North Carolina as our customer and treating the industries that we regulate as our customer. So, that was—that was partly why I felt that I could no longer perform my job in state government, that I was going to have to leave in order to protect the environment.

JUAN GONZÁLEZ: And could you talk about the times that the state attempted to step into regulatory issues to preclude federal government involvement?

AMY ADAMS: Right. Well, what they did with the lawsuit was they stepped in at the last moment and then, instead of having Duke face environmental groups in federal court, when the state steps in as the plaintiff, then they are in a position to make an agreement, a settlement agreement through the courts, with Duke directly and cuts out any public involvement. So that’s why we’ve—we are trying very much to intervene, so that the citizens of North Carolina can have a voice at the table in these lawsuits.

AMY GOODMAN: So, here, these citizens who brought the suits thought, when the state intervened, this was good, this was significant: The state would take over, had a lot of clout and would force Duke in these settlements. But instead they actually stopped action?

AMY ADAMS: Right. By stepping in, what they did was they shielded Duke from potential higher fines or potential more extensive remediation of pollution impacts, because they became the plaintiff, and therefore that put them in a position to say what the penalties would be and what the remediation would be, without that public input.

JUAN GONZÁLEZ: Now, you mentioned that you’ve spoken before about John Skvarla. Could you—for those who may not have heard you, could you say who he is and what his role has been in all of this?

JUAN GONZÁLEZ: And what’s Skvarla’s history before he joined government?

AMY ADAMS: He had been the CEO of Wildlands Restoration. It was a wetland and stream restoration company. Before that, he had been a CEO of several other companies. He is arguably quite talented at taking businesses that have been in the red and putting them in the black. And so, I’m sure that that was part of why his—he was chosen by McCrory, is because McCrory has stated that one of his goals for North Carolina is to grow it economically—and, it seems, even at the sacrifice of some of our environmental rules.

AMY GOODMAN: On Wednesday, we reached Duke Energy’s director of corporate media relations, Tom Williams. He said Governor McCrory’s past work with Duke does not mean Duke is given special treatment today.

TOM WILLIAMS: Our relationship with DENR, Department of Environment and Natural Resources, in North Carolina is no different than our relationship with the state environmental organizations, the departments in the other five states where we operate. And in that, they are our regulator, and they are treated as such. So, to contend that because an individual used to work for Duke, he would be giving us special treatment, is simply is not true. You know, in a nutshell, he used to work for Duke. And we certainly have—I mean, that’s not a secret. And—but he went from Duke to Moore & Van Allen, ran for governor. Our work with DENR is no different than in any of our five states—other five states. So, that’s all I could say. Now, whether or not he is close to—I mean, it’s within his right to appoint a secretary of department.

AMY GOODMAN: Duke Energy spokesperson Tom Williams. Amy Adams, Governor McCrory’s past with Duke, it’s not minor. He worked there for 28 years. Do you feel he’s still working for Duke in some way?

AMY ADAMS: You know, we can argue and we can debate about their interaction and whether it’s beneficial or detrimental to the state. What I can say is that we have the perfect setup right now in North Carolina, with a governor who is familiar with Duke, who is in the position to push legislation forward that would launch North Carolina as a leader in energy efficiency and renewable energies. We have Duke utilities, who arguably have some of the best technology and are in a position, financially, technologically, to explore spreading our energy base way beyond fossil fuels. You know, we have this great setup where we could be utilizing the governor’s relationship with Duke and Duke’s resources to promote a new sustainable energy future for North Carolina. But instead, we’re worrying about whether or not there is a detrimental effect to this relationship, when it could be used for—to promote North Carolina as a leader.

JUAN GONZÁLEZ: And, Amy Adams—less than 30 seconds we have left—could you tell us about this latest historic ash spill, the consequences or the dangers of this ash spill?

AMY ADAMS: Right. We know that there are some pretty significant health impacts as far as, you know, we’ve seen cancer, neurological disorders related to coal ash. Now, this particular spill, we’ve had—we’ve seen the numbers change. We’ve heard as much as 82,000 tons. And we’ve heard the numbers about the sampling. But what I want to point out is that sampling right after a spill is only a snapshot of what’s going on. We have, you know, some very long-term repercussions that we need to be very conscientious of. It’s going to take a long time from now to determine what the real ecological damage is to this river. Even if we’ve decided that we haven’t poisoned our own drinking water, we have poisoned the ecological balance in that river.

AMY GOODMAN: Amy Adams, we have to leave it there. Thank you for being with us, coordinator for Appalachian Voices, North Carolina campaign. Until last year, Amy Adams was a regional supervisor at the state environmental agency in charge of enforcing water standards. She resigned in protest of changes at the agency. 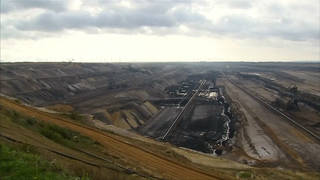