While the fight over the Keystone XL pipeline and the Alberta tar sands has galvanized the environmental movement, far less attention has been paid to a related story here in the West. The state of Utah has begun making preparations for its own major tar sands and oil shale extraction projects. According to one U.S. government report, land in the region could hold up to three trillion barrels of oil — that’s more recoverable oil than has been used so far in human history. Critics say Utah is sitting on a tar sands carbon bomb. The Utah Water Quality Board has recently begun giving out permits for companies to extract from the state’s tar sands reserves. We speak to Taylor McKinnon, energy director of the Grand Canyon Trust.

AMY GOODMAN: This is Democracy Now!, democracynow.org, The War and Peace Report. I’m Amy Goodman. We are broadcasting from Northern Arizona University, just next to the First Amendment Plaza here in Flagstaff, Arizona, where the Burlington Northern Santa Fe Railroad rolls through a hundred times a day.

Well, in Washington on Thursday, the Senate held a heated hearing on the Keystone XL tar sands pipeline. Former NASA scientist James Hansen said it was, quote, “game over” for the climate if Canada extracts all of the oil from the tar sands.

JAMES HANSEN: It’s a question of how much of that tar sands is going to be taken out of the ground. If we build this expensive pipeline, it will facilitate the extraction of much more than if we don’t build it. As soon as you put a price on carbon that’s significant and rising, one of the first things that falls off the table is tar sands. And Canada knows that. That’s why they’re so desperate to get the United States to approve this. If we don’t approve it, a lot of that tar sands will never be developed. The world is going to realize pretty soon that we’ve got to limit the amount of carbon we put in the atmosphere. And it’s going to have to do that via a price on carbon, and that’s going to cause the most carbon-intensive things to get left in the ground, and that includes tar sands.

AMY GOODMAN: While the fight over Keystone and the Alberta tar sands has galvanized the environmental movement, far less attention has been paid to a related story here in the West. The state of Utah has begun making preparations to extract tar sands and oil shale from vast swaths of public and private land. According to one U.S. government report, the region could hold up to three trillion barrels of oil—that’s more recoverable oil than has been used so far in human history. Critics say Utah is sitting on a tar sands carbon bomb.

The Utah Water Quality Board recently began giving out permits for companies to extract from the state’s tar sands reserves. The Grand Canyon Trust is one of several organizations fighting Utah’s plans. We’re joined here in Flagstaff, Arizona, by the group’s energy director, Taylor McKinnon.

Welcome to Democracy Now! So, we have heard of tar sands in Alberta, Canada. Can you explain what’s going on in Utah, Taylor?

TAYLOR McKINNON: In Utah, we have vast deposits of oil shale and tar sands, up to 20 billion barrels’ worth of oil in the tar sands deposits. And the USGS, the United States Geological Survey, estimates up to a trillion barrels of developable oil in the oil shale. These are unconventional fuels. Like Alberta’s tar sands, they need to be mined, melted, before they’re turned into a liquid hydrocarbon. So the energy investment on the front end of their development far exceeds that of conventional oil, and as a result, the resulting carbon emissions from developing these fuels also far exceeds that of conventional oil. When we’re facing climate change and the IPCC is saying we have a carbon budget within which to work in coming decades, this is the exact wrong policy direction from a matter of energy and climate.

AMY GOODMAN: So, I mean, we’ve heard so much about tar sands in Alberta. Why do we hear so little about what’s going on in Utah? And place it exactly for us in Utah.

TAYLOR McKINNON: We’re talking about deposits that are located in the Uintah Basin in eastern Utah and into western Colorado. It’s the heart of the Colorado River Basin. I think the reason we’ve heard more about Alberta’s tar sands is because they’re being developed. In Utah, the deposits are not being developed. It’s prospective. And we’re seeing really the onset of development, the onset of significant investment on the part of industry. We have—

AMY GOODMAN: What are the telltale signs? Like highways being built?

TAYLOR McKINNON: Highways are being built, publicly funded infrastructure. There’s, for example, an $80 million publicly funded road that’s been punched south into the Book Cliffs at the behest of an oil shale lobby in the state Legislature in Utah. So we’re seeing public investment, over a million acres of land, state and federal public land, available for leasing. And we’re seeing the very beginnings of commercial plays, attempted commercial plays, in those deposits, in the shallow deposits in the Uintah Basin.

AMY GOODMAN: How would they get the shale—the shale oil below? How does it—how would the equipment go in? And how would it affect the water?

TAYLOR McKINNON: Right now, the shallow deposits are being targeted, which would mean it would be—it’s strip mining, much like you see mountaintop removal or other coal mining in the U.S. So we’re talking about strip mining.

AMY GOODMAN: Yet isn’t tourism in Utah one of its main sources of revenue?

TAYLOR McKINNON: There’s a lot of tension between fossil fuel extraction—industrializing landscapes for fossil fuels and protecting them for tourism.

TAYLOR McKINNON: We’re engaged on a number of different fronts. In 2012, the Obama administration allocated 800,000 acres of public lands as available for oil shale and tar sands leasing. We’re challenging that leasing framework in court, in federal district court. We’re also challenging several of the individual projects that are moving forward: the first tar sands lease pursuant to that leasing program, in addition to oil shale projects on state land.

AMY GOODMAN: What are the companies that will stand to benefit?

TAYLOR McKINNON: One is Enefit American, which is an Estonian company.

AMY GOODMAN: A company from Estonia?

TAYLOR McKINNON: Essentially, yes. Estonia has relied on oil shale for a long time for much of their power, and they’re one of the most carbon-intensive nations in the world, and they have vast pollution problems right now as a result of burning and mining oil shale. US Oil Sands is one of the leading players in the tar sands in the region. They’re pursuing tar sands mining on state land. And they are—

TAYLOR McKINNON: On U.S. state land. They are—they plan to take that technology and use it in Alberta. Another company is Red Leaf—

TAYLOR McKINNON: They are—they are, I believe, American, but with Canadian interests, if not Canadian-owned. These are foreign companies that are here in the U.S. on the front end of a play to try to get a foot in the door.

TAYLOR McKINNON: Total allocated about $300 million in support of Red Leaf Resources, which is one of the oil shale plays that we see in the Uintah Basin.

AMY GOODMAN: Geographically place this for us in Utah in terms of cities, like Moab, for example.

TAYLOR McKINNON: We’re talking about north of Moab and to the southeast of Salt Lake City and to the northwest of Grand Junction, Colorado.

AMY GOODMAN: And the residents in these areas, how divided are they?

AMY GOODMAN: Compare this to the area of tar sands in Alberta, Canada, the size.

TAYLOR McKINNON: The oil shale deposits, in terms of barrels, are larger—in terms of the barrels of oil, are larger than Alberta’s tar sands. They’re not as accessible. And that’s good news.

TAYLOR McKINNON: Requiring more energy to get at. And that energy investment thus far has precluded them from being commercially viable. But as supplies of conventional oil wane, we see, as in Alberta, more and more investment being put towards these more energy-intensive and carbon-intensive unconventional fuels.

AMY GOODMAN: Where does the Bureau of Land Management stand, and President Obama himself?

TAYLOR McKINNON: The BLM and President Obama have allocated about 800,000 acres of public lands as available for oil shale and tar sands leasing. There are conditions imposed on when a lease can be let, but those lanes are available. And as a matter of climate and energy policy, it’s difficult to reconcile that with our climate goals.

AMY GOODMAN: Taylor, I want you to stay with us in this next segment as we move on to the issue of uranium mining, particularly on Native lands. And we’ll speak with a Native American activist, Klee Benally, as well. This is Democracy Now! We’re broadcasting from Northern Arizona University in Flagstaff, Arizona. Stay with us. 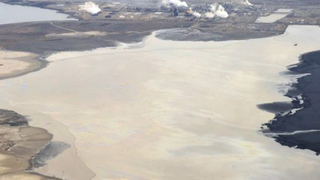