The conflict between Syrian President Bashar al-Assad and rebels seeking his ouster has just entered its fourth year. The Britain-based Syrian Observatory for Human Rights says more than 146,000 people have been killed since the Syrian conflict began on March 15, 2011, roughly half of them civilians. The conflict has displaced more than nine million people, with 2.5 million refugees living outside Syria and 6.5 million displaced within the country. We are joined by Patrick Cockburn, Middle East correspondent for The Independent, who has just returned from several weeks of reporting from Syria.

AMY GOODMAN: We turn now to Syria, where the conflict between President Bashar al-Assad and rebels seeking his ouster has just entered its fourth year. The Britain-based Syrian Observatory for Human Rights says more than 146,000 people have been killed since the conflict began March 15, 2011, roughly half of them civilians. The conflict has displaced more than nine million people, with two-and-a-half million refugees living outside Syria and six-and-a-half million displaced within the country.

Last week, Save the Children reported several thousand Syrian kids have died because of a drastic reduction in access to health services, losing their lives to diseases and conditions including cancer, epilepsy, asthma, diabetes, hypertension and kidney failure. Overall, at least 10,000 children have died in violence.

Last month, the second round of peace talks aimed at resolving the conflict ended in deadlock in Geneva. This is U.N. special envoy Lakhdar Brahimi.

LAKHDAR BRAHIMI: I’m very, very sorry, and I apologize to the Syrian people that their hopes, which were very, very high that something will happen here—I think that, you know, what has—the little that has been achieved in Homs gave them even more hope that maybe this is the beginning of the coming out of this horrible crisis they are in. I apologize to them that, on these two rounds, we haven’t helped them very much.

AMY GOODMAN: U.N. envoy Lakhdar Brahimi is now in Iran for talks with top Iranian leaders on the Syrian conflict.

Earlier this month, a United Nations panel said the regime of Syrian President Bashar al-Assad is waging a campaign of siege warfare and starvation against hundreds of thousands of civilians. The Commission of Inquiry said Syrians are being “denied humanitarian aid, food and such basic necessities as medical care, and must choose between surrender and starvation.” The report also faults Syrian rebels for scores of extrajudicial killings.

This weekend, in a key symbolic victory for the Assad regime, the Syrian military said it recaptured the town of Yabrud, the last rebel stronghold near the Lebanese border. Government forces and Lebanese allies from the group Hezbollah have besieged the town for weeks in an attempt to control key transport routes. Yabrud had been controlled by the opposition for much of the last three years.

To find out more, we are joined by Democracy Now! video stream by Patrick Cockburn, the Middle East correspondent for The Independent. His latest piece on Syria is called “An Unhappy Anniversary: Why the End of Bashar al-Assad is as Far Away as Ever—and How Syria’s Rebels Lost the Plot.” He was in Syria for several weeks last month.

Welcome back to Democracy Now!, Patrick. Well, talk about this third anniversary.

PATRICK COCKBURN: Well, it’s very bad for Syria and very bad for Syrians, as you’ve just been describing. There’s a stalemate on the ground, but it’s a stalemate somewhat in favor of the government. They’re advancing, taking Yabrud, advancing in Aleppo. They’re taking the southern suburbs in Damascus. They’re getting stronger, but not so strong that they’re going to win. The whole of the north, the northeast is held by the opposition and, above all, by the jihadis, by Jabhat al-Nusra, which is the Syrian branch of al-Qaeda, and the former al-Qaeda representative, the Islamic State of Iraq, so—the Islamic State of the Levant. So, there’s no way, I think, that this war can really be seen ending this year or in the next few years.

AMY GOODMAN: Your comments on the failure of the peace talks in Geneva?

PATRICK COCKBURN: I think once John Kerry had said it was all going to be about transition and Iran was not going to come, they were going to fail. I mean, there’s something pretty hypocritical about this, to my mind, because what basically the West is doing, and the regional powers like Saudi Arabia, is asking Bashar al-Assad to step down, for the regime to end. But the regime holds 13 out of 14 provincial capitals. It holds most of the populated areas. Militarily, it’s growing stronger, not weaker. So why should it leave power? So, although there’s a pretense, I think, that this is looking towards peace, the only way that Assad would leave power, if there’s a complete transformation of the situation on the battlefield, and that could only happen over a period of years. So what looks like an attempt to make peace is in fact providing the ingredients for a long war.

AMY GOODMAN: Several representatives from humanitarian aid agencies visited Lebanon this weekend to mark the third anniversary of the Syrian conflict. Again, over 145,000 people have been killed, millions forced to leave their homes since 2011. Speaking in Beirut, the U.N. high commissioner for refugees, António Guterres, called for border restrictions to be relaxed to allow those most at risk to flee to safety.

AMY GOODMAN: The U.N. high commissioner for refugees, António Guterres, also urged the international community to respond to the crisis.

ANTÓNIO GUTERRES: Knowing that nine million people are displaced, between refugees and internally displaced, the largest population displaced in the world today, it’s something that really should deserve a much stronger commitment of the international community, to stop this war, first of all, and then to mobilize our resources for effective humanitarian assistance to the Syrian victims and for solidarity with countries like Lebanon.

AMY GOODMAN: That’s the U.N. high commissioner for refugees, António Guterres. Patrick Cockburn, can you talk about that and the report, for example, from the U.N. panel that the Assad regime is waging a campaign of siege warfare and starvation against hundreds of thousands of civilians?

PATRICK COCKBURN: It is waging a war of sieges and sealing off areas that the rebels take, bombarding them and so forth. We also have to bear in mind, of course, that the opposition, the rebels, are doing exactly the same thing where they can. There are two Shia towns outside Aleppo—Nabil and al-Zahra—a population of about 60,000, who are pro-government, and they are surrounded and besieged and starved. So, you know, you have to look at this—look at both sides. You know, this is a genuine civil war. All these atrocious humanitarian tragedies won’t end until the war ends.

I think—bear in mind another thing, which is, in north and eastern Syria, and right over through northern Iraq, the jihadis have taken over now, al-Qaeda-type organizations. Right up the Syrian-Iraq border, a frontier doesn’t really exist anymore for them. Right up from Fallujah, through Iraq, from Syria up the Turkish border, all this is held by jihadis, by people who are either al-Qaeda or very similar to al-Qaeda. So, while that remains out of control, that’s another contributing factor to the war going on and on. And I think in Western capitals they tend to underestimate what has happened in this very large area in Iraq and Syria, really from the Iranian frontier to the Mediterranean coast, that the jihadis have taken over and have no plans to make peace with anybody.

AMY GOODMAN: You mentioned, Patrick, Iraq. And just in our headlines today, we talked about the U.S. confirming a new round of weapons shipments to Iraq. The U.S. Embassy in Baghdad says nearly a hundred Hellfire missiles and hundreds of thousands of ammunition rounds have been delivered this month, the Obama administration accelerating weapons aid in recent months to support the Iraqi government’s campaign against militant groups. Can you talk about the connections between Iraq and Syria and the significance of this?

PATRICK COCKBURN: Yeah, I would think the significance of this is that basically it’s insignificant, that it’s the administration trying to show it’s doing something. But a hundred Hellfire missiles and some ammunition, first of all, the Iraqi government could both get it elsewhere if it wanted to, and secondly, it completely underestimates the size of what is happening. From Fallujah, capital of Mosul, city of a million in the north, breed other places that al-Qaeda, the Islamic State of Iraq and the Levant, basically exactly the same as al-Qaeda, are taken over in Sunni areas. This sort of extra military supplies don’t make any difference at all. When you get them into Syria, not just in north and east, but, you know, quite close to Damascus, in—there’s a Christian town, Ma’loula, is not so far from Damascus, Jabhat al-Nusra have taken over there. The Christians have fled. This is a genuine civil war, and just looking for the humanitarian situation to improve really isn’t enough when it comes to open borders. Remember, you know, the Turks have left the border open, 500-mile border, over which jihadis and al-Qaeda organizations have been moving freely. That probably needs to be shut. [inaudible] have any approach to peace.

PATRICK COCKBURN: Well, they are removing them. You know, it’s not easy to do. It moves over roads that are susceptible to attack, where fighting is going on. You mentioned Yabrud, the town of Yabrud earlier, which has just be taken by the Syrian army. But that—you know, you can see that from the main road. So, you know, it’s difficult to move chemical weapons up and down roads when there is fighting maybe a few—you know, half a mile away. So I think it’s not too surprising it’s delayed. But I can’t really imagine the government in Damascus having any ploy to retain some of the chemical weapons.

AMY GOODMAN: Patrick Cockburn, I want to thank you for being with us, Middle East correspondent for The Independent. We’ll link to your pieces there, including your last, “An Unhappy Anniversary: Why the End of Bashar al-Assad is as Far Away as Ever—and How Syria’s Rebels Lost the Plot.” He just recently returned from Syria. 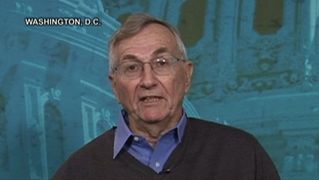