Thousands of fast-food workers in the United States and around the world are staging a one-day strike today to demand a livable wage. A recent report found fast-food CEOs make 1,200 times as much money as the average fast-food worker, a disparity that maximizes short-term profit while harming worker security and the overall economy. We are joined by the report’s author, Catherine Ruetschlin, a policy analyst at Demos; and by Terrance Wise, who has worked at Burger King for nine years and is striking today in Kansas City, his fourth such action since last August.

StoryAug 02, 2013“We Are Slowly Dying”: Fast-Food Workers Launch Strike for Living Wage and Right to Unionize

AMY GOODMAN: For more, we’re joined by two guests. Here in New York, Catherine Ruetschlin is a policy analyst at Demos and author of the report, “Fast Food Failure: How CEO-to-Worker Pay Disparity Undermines the Industry and the Overall Economy.” And Terrance Wise joins us from KCPT, Kansas City Public Television. He’s worked for Burger King for nine years, plans to go on strike today as part of the international push by fast-food and retail workers to demand a living wage. He’s a member of the Stand Up Kansas City campaign. We last spoke with Terrance in August as the strikes were just beginning here in the U.S.

We welcome you both to Democracy Now! Terrance, let’s go to you. You have worked at Burger King for nine years. How much do you make an hour, if you don’t mind me asking?

TERRANCE WISE: Well, I’ve worked in fast food for 17 years and at Burger King for nine years, and I make $9.40 an hour at Burger King.

AMY GOODMAN: I’m sorry, I didn’t catch what you said. Can you say that again?

TERRANCE WISE: I’m sorry. I’ve been working fast food for 17 years, and Burger King I’ve worked for the past nine years, and I make $9.40 an hour working there.

AMY GOODMAN: And why are you going on strike today?

TERRANCE WISE: Well, I’m going on strike for my family. I raise three little girls here in Kansas City, and I need their future not to look anything like the past. We’ve struggled with homelessness, paying basic utilities—gas, rent, the lights. And that’s while working every day. The working poor is what we are.

AMY GOODMAN: Are you concerned about retaliation if you go out today? What has Burger King said? Presumably, since this is being organized all over the country, Burger King and McDonald’s know that workers are going to be walking out.

TERRANCE WISE: Well, me, I first spoke to you, Amy, in August. That was my first strike. And this is number four for me. So, we know that the federal laws provide us protection when we come together as workers and demand the corporations we work for to pay us a living wage and to give us the right to form a union. So with that knowledge of knowing that the federal government protects our rights to organize and go on strike, it’s a huge relief for fast-food workers.

AMY GOODMAN: Terrance, how many hours a week do you work at Burger King?

AMY GOODMAN: And your take-home pay?

TERRANCE WISE: Well, it’s—I make $9.40 an hour, so it’s like 35, 40 hours a week. It’s, after taxes, maybe $400 every two weeks. And that’s working double sometimes, going in in the morning and working at night, just not bringing in enough. And we know that these companies make billions in profit. They can afford to pay us better and do better by us and give us a voice on the job. That’s what we’re demanding.

AMY GOODMAN: Well, Catherine Ruetschlin, you’ve been studying this, the issue of what these fast-food companies can afford. Your report, “Fast Food Failure: How CEO-to-Worker Pay Disparity Undermines the Industry and the Overall Economy.” What is the disparity between the CEO, say, of Burger King and the workers, or McDonald’s?

CATHERINE RUETSCHLIN: Well, you know, when I started the study, I didn’t know that fast food was going to be such an extreme outlier in terms of pay disparity. The study arose kind of in this context that Terrance and other workers like him have created, where there’s a growing awareness that inequality is undermining the economy at several levels. But when I dug into the data, what I found was that fast food is a catalyst, with inequality that outstrips all the sectors of the economy. The CEO of a fast-food company in 2012 earned 1,200 times what the typical worker earned that year.

CATHERINE RUETSCHLIN: Twelve hundred times. And that’s with a fairly generous assumption that workers in fast food are receiving benefits and work a full-time schedule, which in many cases, you know, isn’t true.

AMY GOODMAN: How does that affect the industry and the economy as a whole? You say it hurts it.

CATHERINE RUETSCHLIN: That’s right. You know, there’s a macro-level story that’s just become a part of the conversation with organizations like the IMF and the World Economic Forum in Davos, pointing to inequality as a threat at the macro level because it generates instability in the economy and undermines growth. But then, at the micro level, firms are starting to wake up to the fact that it undermines their bottom lines, as well. In March, McDonald’s filed with the SEC and listed income inequality as one of the primary risks facing their own returns over the coming years, not just because workers are striking, but because they’re having a hard time satisfying their customers because they’ve underinvested in the front-line services that really build the brand and provide revenues to the firm.

AMY GOODMAN: How do you respond to the companies saying, “All right, if they increase the workers’ wages, but then consumers have to be willing to pay more for the burgers”?

CATHERINE RUETSCHLIN: Well, firms have a lot of ways that they could pay for a raise. They don’t necessarily have to pass the cost on to customers. They could do that, but they could also use some of the ways that they’re redirecting their profits right now. Firms like McDonald’s spend billions of dollars a year buying back their own shares of company stock on the market in order to consolidate ownership and bump up earnings per share and meet these short-term benchmarks. But that’s really a short-term understanding of the interest of the firm, right? If they had a longer-term perspective, they would see that rather than investing in their share price, if they were investing in their labor force, they would generate returns—higher productivity, loyal workers with better knowledge of the company processes, you know, lower turnover rates, so lower costs associated with job search—and it would actually receive benefits through that investment that would pay off in the long run.

AMY GOODMAN: And the issue of how these companies are subsidized, government-subsidized?

CATHERINE RUETSCHLIN: That’s right. A study came out recently that shows that fast-food employers, like McDonald’s, Subway, you know, Yum! Brands, which owns Taco Bell and KFC and Pizza Hut, Domino’s Pizza, these are some of the highest-ranking employers in terms of working poor. So, if you can—if you look into who’s receiving healthcare benefits for their families and wage subsidies from the state agencies, from poverty alleviation programs, the highest-ranking firms are Wal-Mart and fast food. So, it’s the taxpayers who are actually paying the—for the ability for these firms to maintain a labor force at all.

AMY GOODMAN: Terrance, how does it feel to learn that the CEO makes something like 1,200 times more than what you make?

TERRANCE WISE: Well, I know that workers like myself and my co-workers across the city, we go to work every day, and we’re the driving force behind his billions in profit he brings in. He’s buying new yachts and new boats and new cars, and I just want to put my kids through college. So, just to see the disparity that I’m making $9.50 an hour and he makes over $9,000, and just to get that out to the public and that information to be known, it’s eye-opening. And it calls for change.

AMY GOODMAN: And, Terrance, the action you’re going to engage in today in Kansas City, what exactly are you going to do?

TERRANCE WISE: Well, like I said earlier, this is my fourth time. And I’ll band together with the majority of the co-workers at my store and hundreds of workers from around the city, and we’ll go different parts of the city. We’ll do chants. We’ll hold signs. We’ll give speak-outs. We’ll try to enter some stores, like I heard them say on New York earlier. In New York City, they’ve been doing this, and we’ll be doing this here in Kansas City. It’s just to get the message out to the public and to our bosses in the companies, that we’re not afraid. We’re going to stand together in solidarity, and we demand better. We’re not asking for a minimum wage increase. It’s not a minimum wage drive. It’s for billion-dollar corporations that have the money to pay us better and give us the right to have a union in this industry.

AMY GOODMAN: Well, Terrance Wise, I want to thank you very much for being with us, Burger King worker on strike today, part of Stand Up Kansas City, speaking to us from Kansas City Public Television. And, Catherine Ruetschlin, one more thing, not only the issue of the pay ratio of worker to CEO, 1,200 to one, CEO of course being the 1,200, but the fast-food CEOs earnings quadrupling.

AMY GOODMAN: Compared to what, with the workers?

CATHERINE RUETSCHLIN: That’s right. What we’ve seen is that at these firms that have benefited from economic growth, overall, the CEOs and top executives have been able to capture all of those gains. So, while the fast-food CEO pay grew by 470 percent since 2000, worker earnings only grew by 0.3 percent. Now, that means that their earnings aren’t even keeping up with the basic cost of living, so they’re actually losing ground in terms of standard of living year after year.

AMY GOODMAN: Catherine Ruetschlin, I’d like you to stay with us, because next up after break we’re going to talk about Wal-Mart. President Obama spoke at a Wal-Mart recently. Right afterwards, 1,800 warehouse workers in California settled a major wage theft lawsuit against Wal-Mart and one of its largest contractors. This is Democracy Now! We’ll be back in a moment. 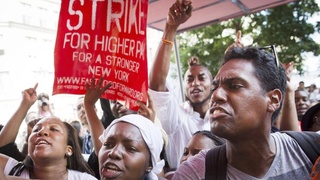 “We Are Slowly Dying”: Fast-Food Workers Launch Strike for Living Wage and Right to Unionize