We are joined by Aviva Chomsky, whose new book, “Undocumented: How Immigration Became Illegal,” details how systemic prejudice against Mexicans and many other migrant workers has been woven into U.S. immigration policies that deny them the same path to citizenship that have long been granted to European immigrants. She also draws parallels between the immigration laws now in place that criminalize migrants, and the caste system that has oppressed African Americans, as described by Prof. Michelle Alexander in her book, “The New Jim Crow.” Chomsky’s previous book on this topic is “'They Take Our Jobs!' and 20 Other Myths about Immigration.” She is a professor of history and coordinator of Latin American studies at Salem State University in Massachusetts.

JUAN GONZÁLEZ: We turn now to a new book that documents how systemic prejudice against Mexicans and many other migrant workers has been woven into U.S. immigration policies that deny them the same path to citizenship that has long been granted to European immigrants. The book is by Aviva Chomsky, and it’s called Undocumented: How Immigration Became Illegal.

AMY GOODMAN: Chomsky’s previous book on this topic is “They Take Our Jobs!” and 20 Other Myths About Immigration. She’s professor of history and coordinator of Latin American studies at Salem State University in Massachusetts. And in case you’re wondering, yes, she is the eldest daughter of Professor Noam Chomsky. She’s joining us from Boston.

Professor Chomsky, welcome to Democracy Now! Talk about this history that is not very well understood, I think, in this country.

JUAN GONZÁLEZ: Avi Chomsky, I wanted to ask you—in your introduction, you refer to a phrase that I’ve heard often from readers and callers, angry—usually angry readers and callers to me at the Daily News, when they say, “Mr. González, what part of 'illegal' don’t you understand?” And you raise the point that the concept of illegality in terms of immigration is actually a relatively new term in American history, and it’s also been changed over time. And its use is actually—has become—has always been racialized. Could you talk about that?

AVIVA CHOMSKY: Yes, absolutely. I think it’s part of the same system that I was describing before that restricted immigration to white people and citizenship to white people and then started to cut off immigration. But as immigration started to be restricted for groups, including Asians and eventually even for Europeans who were considered to be inferior Europeans, like southern and eastern Europeans in the 1920s, Mexican border crossing was never restricted. And Mexican border crossing was never restricted because Mexican labor was so utterly necessary in the Southwest of the United States and because Mexicans were not considered immigrants, so therefore their immigration did not have to be restricted. They were considered to be workers, legally discriminated against for—on what were considered racial grounds—that is, they were racially so-called “Mexican.” That was perfectly legal. To deprive them of citizenship was perfectly legal. And the system worked from the perspective of maintaining the United States as a white country, because unlike the Asians, Mexican migration was generally a circular migration. That is, Mexicans came, worked for a season or year or couple of years, and returned to Mexico. So the history of border migrations for 150 years was one of circular migrations that were basically either completely unregulated or, as, for example, during 1942 and 1964, extended through ’67, government-sponsored through the Bracero program, but migrations that denied citizenship and denied rights to the Mexicans who were in the country.

So, the creation of illegality and starting to call this migration illegal happens in 1965, really, when Mexican migration is for the first time considered to be immigration and is legally restricted—that is, a quota is put on Mexican migration, as it is on every country of the world. And in a situation where tens of thousands of Mexicans have been crossing the border legally and recruited and sometimes even coerced every year, all of a sudden this is made illegal. It’s not stopped, but it’s given a different name. Instead of calling it the Bracero program, it’s called illegal migration. It’s still just as necessary to the economy of the Southwest, it’s still encouraged by all different sectors, but the discrimination against these workers is now justified by the introduction of this new terminology and status of illegality. I hope I explained that; it’s a little complicated.

JUAN GONZÁLEZ: And so, and your point then is that once this new illegality for Mexican immigration begins post-'65, that then begins the criminalization of Mexicans as migrants. And you draw the parallel in your book with Michelle Alexander's book on mass incarceration and how the racialization that occurs—and she describes in her book, The New Jim Crow: Mass Incarceration in the Age of Colorblindness. This is Alexander speaking on Democracy Now!

MICHELLE ALEXANDER: I think we’ve become blind in this country to the ways in which we’ve managed to reinvent a caste-like system here in the United States, one that functions in a manner that is as oppressive, in many respects, as the one that existed in South Africa under apartheid and that existed under Jim Crow here in the United States. Although our rules and laws are now officially colorblind, they operate to discriminate in a grossly disproportionate fashion. Through the war on drugs and the “get tough” movement, millions of poor people, overwhelmingly poor people of color, have been swept into our nation’s prisons and jails, branded criminals and felons, primarily for nonviolent and drug-related crimes—the very sorts of crimes that occur with roughly equal frequency in middle-class white neighborhoods and on college campuses but go largely ignored—branded criminals and felons, and then are ushered into a permanent second-class status, where they’re stripped of the many rights supposedly won in the civil rights movement, like the right to vote, the right to serve on juries, and the right to be free of legal discrimination in employment, housing, access to education and public benefits.

JUAN GONZÁLEZ: So, Avi Chomsky, you draw similar parallels in terms of the criminalization of Mexicans. Could you elaborate?

AVIVA CHOMSKY: Yeah, when you listen to Michelle Alexander list the legal disabilities that come with a criminal record, they look exactly like the legal disabilities that come to Mexicans because of their illegal status. That is, they can’t vote, they can’t serve on juries, they aren’t eligible for public benefits, they’re legally prohibited from working. And when I read Michelle Alexander’s book and heard her speak about this, I thought there’s a real parallel here. And one part of the parallel is that the dismantling of the Jim Crow regime, as a result of popular mobilization and the civil rights movement, goes along with a dismantling of the regime of legalized discrimination against Mexicans embodied in the Bracero program. That is, the idea that we can actually step up and say outright that this is what we’re doing: We are going to bring in Mexican workers and discriminate against them just because they’re Mexicans. You can’t do that anymore in the climate of the 1960s.

And yet, another idea of hers that I find so compelling is this idea of status as a caste and the creation of a new status for these Mexican workers that justifies mistreatment by criminalization, rather than overtly by race, like it’s OK to discriminate against them just because they’re Mexican. Now we won’t call it that. Now we’re going to turn them into criminals, and then we can justify discrimination on the basis of the fact that we’re calling them criminals.

AMY GOODMAN: Avi Chomsky, as we wrap up, you have written several books now on immigration. You wrote “They Take Our Jobs!” and 20 Other Myths About Immigration and, of course, your new book, Undocumented: How Immigration Became Illegal. What surprised you most in your research for this book?

AVIVA CHOMSKY: I think what surprised me most happened before I knew I was writing the book, but it’s one of the things that led me to write the book. I had been working with immigrants, including many undocumented immigrants, in the United States really since the early 1980s, but I had never been to the border. And some of my friends who work with border organizations down in Arizona kept saying, “You can’t keep talking about immigration without coming to the border.” And finally, in 2010, I took a group of students on a trip with No More Deaths, where we worked on the Mexican side of the border taking testimonies from people who had been deported, people who mostly had been picked up in the desert and were dumped in Nogales, Sonora, on the Mexican side of the border, taking their testimonies and hearing their stories and just realizing the drastic and devastating nature of our immigration policies and their impact on people and really turning the border into what felt like a war zone. But there was no war. These people were displaced and uprooted and homeless because of deliberate U.S. policies.

AMY GOODMAN: Aviva Chomsky, we want to thank you for being with us. A new book, Undocumented: How Immigration Became Illegal. She is a professor at Salem State College—at Salem State University in Massachusetts.

This is Democracy Now!, democracynow.org, The War and Peace Report. When we come back, we continue our discussion about reparations in America. Stay with us.

Part 2: Ta-Nehisi Coates on Segregation, Housing Discrimination and “The Case for Reparations”

NEXTPart 2: Ta-Nehisi Coates on Segregation, Housing Discrimination and “The Case for Reparations” 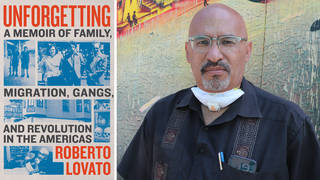