“Colonialism is Inhuman”: Diplomat Lakhdar Brahimi on the Lessons of Algeria’s Independence Struggle

Weeks after his resignation as the U.N.-Arab League special envoy for Syria, the longtime diplomat and former freedom fighter Lakhdar Brahimi discusses his own country, Algeria, and its struggle for independence from the French. The Algerian rebellion was captured in the classic anti-colonial film “Battle of Algiers,” which vividly depicts the Algerian struggle against the French occupation in the 1950s and early 1960s. “They dispossessed a whole nation,” Brahimi says of the French occupation. “Colonialism was very inhuman.”

StoryNov 07, 2019Algerian Protesters Are Still in the Streets, Months After Pushing Out Longtime President Bouteflika

AMY GOODMAN: We continue our conversation with Ambassador Lakhdar Brahimi. He resigned as U.N.-Arab League special envoy to Syria last month. Nermeen Shaikh and I interviewed him yesterday.

NERMEEN SHAIKH: Do you think that this, what we are seeing in Syria and in Iraq, that this is just the beginning of a larger regional war? Do you think any of these states will survive intact, Iraq or Syria?

LAKHDAR BRAHIMI: Syria, I think, I think will survive. I think that the people in Syria are not thinking themselves of any partitions. You know, if things go on as they are for 10 years, I don’t know what will happen. But, you know, if we start having a solution this year or next year, I think that Syria will remain united. And I said very early on that the risk in Syria is not a partition in states just like it happened in Yugoslavia, but Somalization, which means that the country will become a failed state with warlords all over the place. In Iraq, it’s—I don’t know, really. I hope that the country will stay united, but I think that the danger is bigger in Iraq than it is in Syria.

AMY GOODMAN: Ambassador Brahimi, as we begin to wrap up this discussion, I wanted to do something the media, the soundbite media, rarely does, and that’s go back in time. You participated in Algeria’s struggle for independence and represented the National Liberation Front in Indonesia from '56 to ’61. I wanted to go to an excerpt of the highly acclaimed 1966 film, The Battle of Algiers, that depicts Algeria's fight for independence from French occupation in the '50s and early ’60s. This is a scene of a news conference where the Algerian resistance fighter Ben M'hidi is answering questions from reporters.

REPORTER 1: [translated] Mr. Ben M’hidi, isn’t it a filthy thing to use women’s baskets to carry explosives for killing people?

LARBI BEN M’HIDI: [translated] Doesn’t it seem even filthier to drop napalm bombs on defenseless villages, wreaking even greater havoc? It would be better if we, too, had planes. Give me the bombers, and you can have the baskets.

REPORTER 2: [translated] Mr. Ben M’hidi, in your opinion, does the FLN still have some chance of defeating the French army?

LARBI BEN M’HIDI: [translated] The FLN has more possibility of beating the French forces than they have of stopping history.

AMY GOODMAN: A scene from The Battle of Algiers, one of the most influential political films in history. It was released in 1966 by Italian filmmaker Gillo Pontecorvo. In 2003, the film again made news after the Pentagon offered a screening just months after the U.S. declared war against Iraq officially over. A flyer for the screening stated the following: “How to win a battle against terrorism and lose the war of ideas. Children shoot soldiers at point-blank range. Women plant bombs in cafes. Soon the entire Arab population builds to a mad fervor. Sound familiar? The French have a plan. It succeeds tactically, but fails strategically. To understand why, come to a rare showing of this film,” said the Pentagon poster. Ambassador Brahimi, your response?

LAKHDAR BRAHIMI: Yeah, what can I tell you? That was definitely one of the best films in history of cinema, I think. A lot of the people who played in that film were playing their own role in life.

It is true, I think, what Ben M’hidi said. When you are in a kind of asymmetric war that we were engaged in, you use methods that, if you look at it from outside, are reprehensible. So, you know, this is—this is a fact of life. Yes, there were friends of ours, fellow students, women—two or three of them are still around—who transported bombs in their handbags in those days. The French won the Battle of Algiers, but they lost the war. That is true. And that is, again, you know, I think, as was said in the film, this is history.

Ben M’hidi, by the way, was assassinated by the French, and until very recently they were still claiming that he committed suicide. But then, one man who died not long ago, who was a captain in the French army then, said, “I have strangled him with my own hands.” So, you know, when you are engaged in these terrible conflicts, a lot of things happen that are better if they didn’t.

But, you know, we were occupied for 162 years—132 years, and the occupation has been absolutely terrible. You know, we were dispossessed. You know, first of all, the war of invasion—the invasion, when they came in in 1830, from 1830 to—was absolutely savage. You know, they have burned villages. They have put people in caves and burned them out. And so, that was—that was much worse than the bombs that were planted in cafes in the '50s and the ’60s. And then they dispossessed a whole nation. You know, practically every piece of good land was taken away from Algerians and given to colonists. We had one million French colonists there. They owned—they owned maybe 80 percent of the good land in Algeria. So, you know, colonialism was very, very, very, very inhuman, much more inhuman than those bombs in the bags of some of our fellow students in those days. Yeah, so, but that is over. Where are we now? You know, that's another story.

AMY GOODMAN: The fact that Secretary of Defense Donald Rumsfeld was using this as an example of the lessons the U.S. should learn in dealing with Iraq?

AMY GOODMAN: Longtime Algerian diplomat Lakhdar Brahimi, speaking to us from Paris, France. He resigned his post in May as the United Nations-Arab League special envoy for Syria.

Algerian Protesters Are Still in the Streets, Months After Pushing Out Longtime President Bouteflika 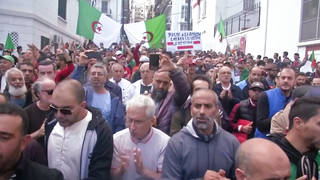 Algerian Protesters Are Still in the Streets, Months After Pushing Out Longtime President Bouteflika