In one of the most significant press freedom cases in decades, the Supreme Court has refused to hear an appeal from James Risen of The New York Times. Risen is refusing to testify in the trial of an ex-CIA analyst accused of being his confidential source. He has vowed to continue his fight and face imprisonment rather than reveal his source’s identity. Tune in to Democracy Now! on Tuesday when we get reaction to the latest developments from Trevor Timm of the Freedom of the Press Foundation.

In the meantime, catch our 2008 interview with Eric Lichtblau, who won a Pulitzer Prize with Risen for exposing the NSA’s warrantless wiretapping despite White House pressure to kill the story. Lichtblau spoke to Democracy Now! in a national broadcast exclusive about his book, Bush’s Law: The Remaking of American Justice. He reveals the inside story of the New York Times’s decision to delay publication of the story for more than a year after intense Bush administration lobbying. 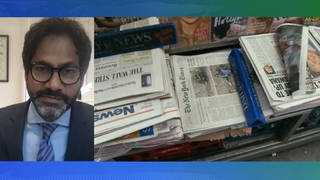