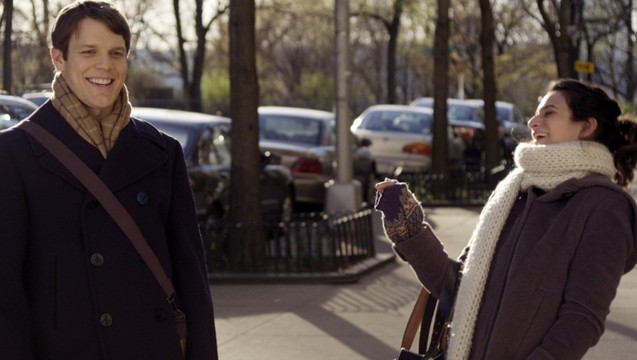 TRANSCRIPT
AMY GOODMAN: We are broadcasting from the Sundance Film Festival in Park City, Utah, as we turn to one of the most talked-about films at Sundance this year. It’s called Obvious Child, like the Paul Simon song you just heard. The film stars former Saturday Night Live cast member Jenny Slate as Donna Stern, a Brooklyn comedian who speaks openly about sexuality and other taboo topics on stage. When Donna gets pregnant, she decides to have an abortion. While one in three women in the United States will have an abortion, the topic is rarely dealt with in films. Obvious Child has been hailed as the first romantic comedy about abortion, but it’s much more than that. The film premiered here at Sundance and has been acquired by A24 for a rumored seven-figure sum.

GILLIAN ROBESPIERRE: The movie is about Donna Stern, played by Jenny Slate, who gets dumped, fired and pregnant just in time for Valentine’s Day. That’s our elevator pitch. But it’s really about a woman who is trying to figure out—she’s growing up. You know, she’s not very confident in the beginning of the story. She lets things just happen to her, and she’s not really taking charge of her life. And I think, through the course of the movie, while it’s very subtle, she does change a little bit, and she gains more confidence towards the end.

AMY GOODMAN: And abortion is one of the themes of this film.

AMY GOODMAN: And that’s very unusual, especially for it to be wrapped in a very positive way. Talk about that decision.

GILLIAN ROBESPIERRE: Well, in 2009, my best friends and I wanted to make this movie—Anna Bean and Karen Maine. And we were sort of disenchanted and frustrated by the limited representation of women, real women, in movies and unplanned pregnancy in movies. And instead of waiting and waiting, we decided to go out and make this on our own. And we did. We shot this movie in four days. Jenny was in it. This was before she was on SNL. She was a stand-up comedian that we met in the Brooklyn comedy scene. I love stand-up. I’m not one; she is. And I’m just—and I was in awe of her performance on stage. Within five minutes, I knew that she had to be in this movie. We were looking for somebody who was funny and lewd and had a lot of heart, and we had a hard time finding that actor. But when I went to that big, terrific show and saw her, I knew that she had to be in this movie.

AMY GOODMAN: So, the first film you made was like, what, 22 minutes or something?

GILLIAN ROBESPIERRE: It had a very sweet festival run. But what really happened was, like, we put it on Vimeo. We put it on the Internet, and it just took off from there. Jezebel, Bust, Bitch magazine_, Feministing were so supportive of this film, in a way that I was—I didn’t know they would latch on that way. And then 40,000 people watched this little short. And that inspired me to turn this into a feature.

AMY GOODMAN: So there’s this piece in Slate, “Characters Who Have, or Just Think About Having Abortions Often Die.” The figures are amazing. I want to read this piece by Roxanne Khamsi, just a little bit of it.

AMY GOODMAN: “Life on screen can be dangerous if you are a woman faced with an unplanned pregnancy. A new study has found that Hollywood grossly exaggerates the risk of abortion: While the number of plotlines featuring abortion has grown in recent decades, movies and television shows often kill off characters for even just contemplating the possibility of this procedure.” It is quite astounding.

“Of the 310 movies and episodes that featured abortion as a major plotline or featured an abortion provider as a main character, a striking 9 percent portrayed the death of a woman after having—or even deciding on—an abortion.” That’s pretty incredible.

AMY GOODMAN: So, you show it in a very different way. And in the clinic itself, you worked with Planned Parenthood?

AMY GOODMAN: So I wanted to compare how your film deals with abortion with others, like Juno. You have the main character going into a women’s health clinic to get an abortion. She’s met by a classmate outside who is holding a sign that says, “No Babies Like Murdering.”

SU-CHIN: Oh, hi, Juno. Your baby probably has a beating heart, you know. It can feel pain. And it has fingernails.

AMY GOODMAN: So, Juno goes inside, and, you know, she’s haunted by her classmate saying the baby has fingernails. And she’s looking at everyone’s fingers, and the receptionist is—she’s tapping on something, like she’s playing a video game or she’s texting or something, and she’s just freaked out. It’s not a very warm experience. Then she runs out.

GILLIAN ROBESPIERRE: No, and I’m sure that’s an experience that some women do have. I am lucky. I live in New York. I don’t—

AMY GOODMAN: It’s one of the first places that abortion was legal.

GILLIAN ROBESPIERRE: Right. And, you know, I wanted to show this particular story without protesters, because that—not every time you go to Planned Parenthood or a clinic to do anything, from getting a mammogram to, you know, just getting a checkup, you don’t interact—you don’t always interact with protesters. So I just wanted to show that side. And while I know that there are many clinics that have protesters standing outside, that’s been depicted in movies before. I’ve seen that. And I know that exists. So, let’s show the other side.

AMY GOODMAN: How much of this film is you?

GILLIAN ROBESPIERRE: It was a collaborative effort. I had many strong female women voices to help write this story. Some of it we took from our lives, and some of it was made up.

AMY GOODMAN: It’s a big deal, even today, in a sex scene in a movie, for one of the characters to reach for a condom. That is very rare—

AMY GOODMAN: —let alone to make a major part of the film about abortion. And yet, you come to the Sundance, and it’s like the second film sold. It sold for seven figures. This is a huge message.

GILLIAN ROBESPIERRE: Maybe people are just really ready to see this and have been dying to see something like this. They just didn’t know.

AMY GOODMAN: So, it’s the 41st anniversary of Roe v. Wade. What are your thoughts as we do this interview?

GILLIAN ROBESPIERRE: You know, I know it’s a—that women’s rights are under attack and that there are many states that have put new restrictions on women being able to have safe, positive procedures. I just think it’s a really good time for people to tell their stories.

AMY GOODMAN: How do you feel this film will impact future films about abortion, since, for the most part, it has been either not dealt with or dealt with in very difficult ways—in many cases, the woman meeting her doom?

GILLIAN ROBESPIERRE: Yeah, I don’t know what the forecast is for other films, but my hope is that other filmmakers get excited about telling more honest and real stories, and that people—that it ignites conversation, both sides.

GILLIAN ROBESPIERRE: Well, it’s the Paul Simon song, which is in the film. I listened to Paul Simon in the car growing up. My dad blasted it every weekend when we’d go on little road trips. And he’s just been a part of my childhood. And then I took a break from Paul Simon and revisited him in my twenties and had a whole different take on him. And I was no longer a little girl staring out the window; I was an adult woman—well, twenties, sort of adult woman. And I re-fell in love with him. And I thought it would be great to put a sequence of somebody dancing around their apartment with a boy naked to Rhythm of the Saints. You know, it’s a great song. It’s got this sadness to it, but it’s also upbeat. And that’s my favorite type of music.

AMY GOODMAN: And what do you think of this film being described as a romantic comedy about abortion?

AMY GOODMAN: It’s hard to believe that in 2014 you’re breaking new ground when it comes to just dealing with what so many women deal with every day. But when it comes to Hollywood, which takes risks in a lot of ways, it’s you, actually, who are breaking ground in making this an experience that many women have and have to deal with.

GILLIAN ROBESPIERRE: Thank you. Thanks so much.

AMY GOODMAN: No, you were supposed to respond to that.

GILLIAN ROBESPIERRE: I don’t know how to respond to that. “Hollywood, my phone number is…”

AMY GOODMAN: That was Gillian Robespierre, the director of Obvious Child, which had its world premiere at the Sundance Film Festival. 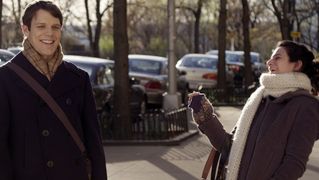