Dr. Mads Gilbert, a Norwegian doctor, joins us from Gaza where he has been treating hundreds of victims wounded in Israel’s ongoing assault, including young children. Dr. Gilbert says hospitals are operating without electricity, water and proper medical supplies, but adds: “As a medical doctor, my appeal is don’t send bandages, don’t send syringes, don’t send medical teams. The most important medical thing you can do now is to force Israel to stop the bombing and lift the siege of Gaza.” Gilbert recently recently submitted a report to the United Nations on the state of the Gaza health sector in 2014. “Where is the decency in the U.S. government allowing Israel this impunity to punish the whole civilian population in Gaza?” Gilbert asks.

AMY GOODMAN: Dr. Mona El-Farra, we’re also joined by Dr. Mads Gilbert, the Norwegian doctor who has just come back to Gaza, who submitted a report to the United Nations on the state of health in Gaza. Dr. Gilbert, I know you have a long line of patients there, but—and we had hoped to have you all on a satellite connection, but it’s very difficult with the electricity going out constantly. You rarely in the media see direct reports from Gaza in the same way that you do from Jerusalem, from other parts of Israel. Dr. Mads Gilbert, what are you seeing right now?

DR. MADS GILBERT: Well, I’m seeing the staff in Shifa Hospital doing their utmost to care for the people, the Palestinian people who are being bombed constantly by the overwhelming military force of the Israeli military. And really, I mean, it’s extremely impressive to see their resilience, their determination and the way they cope with these extremely harsh conditions that they’re in now.

As you said, so far, close to 170 Palestinians have been killed, among them 36 children and 24 women. And among the 1,232 injured, there are 346 children and 256 women. So, 50 percent of the injured are women and children. Now, this tells you that these attacks are not targeting the militarists in Palestine, in Gaza. These attacks are targeting the whole population in order to intimidate them and to force them to give up their resistance. I’ve been to Gaza through the last 17 years, and every time it is the same story. Israelis are accusing the Palestinians of attacking them; they have to defend themselves, they claim. Actually, the truth is the exact opposite. Israel is the attacker, the occupant. Internationally, they are responsible, according to the law, for the security and the well-being of the occupied population, whereas in fact Israel is doing their utmost to kill them and to make their life as miserable as possible through these seven years of siege.

And I would like to add that I work in a Norwegian university hospital, and we are depending on the same sort of preconditions to handle mass casualty situations. The Palestinian hospitals are denied a constant supply of energy, of water, of disposables, medical drugs—all the items you need to run a university-level hospital. And on top of this, on top of this total drainage of resources from the siege, they are now exposed to this constant and very large flow of very severely injured. And they are not crippled. On the contrary, they stand tall. They have doubled or tripled their shifts. They do 24-hour shifts. Everyone is extremely tired and exhausted, but they don’t yield. They don’t leave their positions. And yesterday, the hospital director in Shifa, Dr. Nasr’s home was completely bombed and destroyed by the Israeli forces. And we have, of course, nurses and doctors and other ambulance drivers being injured and even killed. So, I think it’s important to understand that the Palestinians, yes, they are suffering, but they are not begging. Yes, they are oppressed, but they are standing extremely strong together in this time of crisis.

As a medical doctor, you know, my appeal is: Don’t send bandages. Don’t send syringes. Don’t send medical teams. The most important medical thing you can do now is to force Israel to stop the bombing, and it is to lift the siege of Gaza. Then the Palestinians will manage well themselves.

As for the injuries, there are all types of war injuries, from shrapnel injuries to these very extreme damages from the DIME weapons, the DIME explosives, the dense inert metal explosives, that they are using, carried by Hellfire rockets connected to the drones of Israeli, and they are extremely destructive. So people are torn apart. I mean, they’re split at their midlevel. They lose their arms and legs, and they’re killed. They’re charcoaled by the burns, if they are hit by these DIME explosives. We have had gruesome, absolutely gruesome injuries, which people cannot actually watch. But the most important injuries are those who maim without killing. I was just tending to a 24-year-old Palestinian student who has lost both his legs at hip level. We had to amputate both his legs. Both arms severely burned, now he has septicemia. And it’s really a hard struggle, even for a well-equipped American university hospital with all supplies and peace and security, to handle one such patient. Now they have by the hundreds. The other patient I tended to was a five-year-old. His house was bombed. The roof of the ceiling of his bedroom fell on his head. He has a closed head injury, very severe. We don’t know if he will survive.

What did these people do to deserve this treatment? What did these people do to deserve the support of the U.S. government to support Israel to attack the people of Gaza in this way? I mean, where is the humanity? Where is the decency of the U.S. government allowing Israel this impunity to punish the whole civilian population in Gaza? It’s just outrageous. And the main problem in the Middle East today, it is the Israeli impunity. They go on with these so-called military campaigns every third year. They kill. They maim. They try to sort of oppress the population to surrender. The Palestinians will never surrender. And our duty is to support them and to raise the awareness and to raise the solidarity work in our countries to pressure our politicians to change the attitude towards the real oppressor and the real criminal here. It is the state of Israel.

AMY GOODMAN: Dr. Mads Gilbert, the attack on the center for the disabled where two women were killed, can you talk more about that? Do you know of that?

DR. MADS GILBERT: Yes, of course I know about that. This is a well-established hospital, which is doing, you know, rehabilitation work for disabled, not at least the war injured. This hospital is located in an area which the Israeli military obviously wants to flatten in order to have more easy access for their tanks. I was not there, but the reports I had were that they actually had soldiers come in fairly close to the hospital, and then they targeted it, and killing these people, as you say. In 2009, there was absolutely no security for hospitals and ambulances, nor was it in 2012. So, I mean, if there is one nation firmly supported by the U.S. which is violating the Geneva Convention, violating the international treaties in all aspects, it is Israel. They don’t even respect hospitals. And why don’t they open corridors so that the hospitals in Gaza can have supplies? Why don’t they open Erez and Rafah, the Egyptians also, to evacuate those severely injured that need to be treated abroad? I mean, even those very, very basic provisions, which are anchored in international law, is denied the Palestinians.

AMY GOODMAN: Well, I want to thank you both for being with us. Dr. Mads Gilbert, a Norwegian doctor providing medical assistance in Gaza, he has just returned there and submitted a report to the United Nations on the state of Gaza’s health sector, submitted to the U.N. Refugee and Works Agency. Dr. Mona El-Farra, Gaza projects for the Middle East Children’s Alliance, also with the Palestinian Red Crescent Society of the Gaza Strip. I know you have a lot of work to do. Thank you for taking the time to speak to us.

This is Democracy Now! When we come back, Cecily McMillan joins us. She’s just out of jail, the Occupy protester. Stay with us.

“Your Body Is No Longer Your Own”: Freed OWS Activist Cecily McMillan on Plight of Women in Jail

NEXT“Your Body Is No Longer Your Own”: Freed OWS Activist Cecily McMillan on Plight of Women in Jail 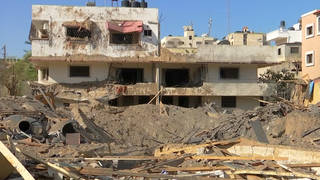