A Malaysia Airlines flight carrying 298 people has exploded and crashed in eastern Ukraine, killing everyone on board. U.S. and Ukrainian officials say the Boeing 777 was shot down by a Russian-made surface-to-air missile, but it is unclear who fired the missile. The plane was traveling from Amsterdam to Kuala Lumpur with passengers from at least 10 countries on board, including 173 Dutch nationals, 44 Malaysians and 27 Australians. As many as 100 of the world’s leading AIDS researchers and advocates were reportedly on the plane en route to a conference in Australia, including the pioneering researcher and former president of the International AIDS Society, Joep Lange. Both sides in Ukraine’s conflict are blaming each other for downing the plane. We speak with Professor Stephen Cohen on what this incident could mean for the region. His most article for The Nation magazine is “The Silence of American Hawks About Kiev’s Atrocities.”

JUAN GONZÁLEZ: A Malaysia Airlines flight carrying 298 people has exploded and crashed in eastern Ukraine, killing everyone on board. U.S. and Ukrainian officials say the Boeing 777 was shot down by a Russian-made surface-to-air missile, but it’s unclear who fired the missile. The plane was traveling from Amsterdam to Kuala Lumpur with passengers from at least 10 countries on board, including 173 Dutch nationals, 44 Malaysians and 27 Australians. As many as 100 of the world’s leading AIDS researchers and advocates were reportedly on the plane en route to a conference in Australia, including the pioneering researcher and former president of the International AIDS Society, Joep Lange. Both sides in Ukraine’s conflict are blaming each other for downing the plane. Malaysian Prime Minister Najib Razak vowed to launch a full investigation into what happened.

PRIME MINISTER NAJIB RAZAK: We must, and we will, find out precisely what happened to this flight. No stone will be left unturned. If it transpires that the plane was indeed shot down, we insist that the perpetrators must swiftly be brought to justice.

AMY GOODMAN: After the plane crashed, Russian media quoted witnesses saying they saw the plane being hit by what looked like a rocket. There have been several other recent disputes over planes being attacked over eastern Ukraine. On Thursday, Ukrainian officials blamed the Russian air force for shooting down one of its ground attack jets and a transport plane earlier in the week.

Over the past few days, Western governments have expressed growing concern that Russia is amping up its military support for separatists in eastern Ukraine. The United States strengthened its economic sanctions against Russia this week, but the European Union has so far declined to follow suit.

For more, we’re joined by Stephen Cohen, professor emeritus of Russian studies and politics at New York University and Princeton University. His most recent piece for The Nation is headlined, “The Silence of American Hawks About Kiev’s Atrocities.” His book, Soviet Fates and Lost Alternatives: From Stalinism to the New Cold War, is out in paperback.

Professor Cohen, welcome to Democracy Now! What do you think we should understand about what has taken place?

STEPHEN COHEN: The horror of it all, to quote Conrad, watching your reports on Gaza, knowing what I know but what’s not being reported in the mainstream media about what’s been going on in eastern Ukraine cities—these cities have been pounded by Kiev—and now this. “Emeritus,” as you call me, means old. I’ve seen this before. One function of cold war is innocent victims. The people who died, nearly 300, from many countries, are the first victims, nonresidential victims, of the new Cold War. This crash, this shootdown, will make everything worse, no matter who did it.

There are several theoretical possibilities. I am not a conspiracy buff, but we know in the history of the Cold War, there are provocations, people who want to make things worse. So, in Moscow, and not only in Moscow, there are theories that somebody wanted this to happen. I just can’t believe anybody would do it, but you can’t rule anything out.

Another possibility is that the rebels—we call them separatists, but they weren’t separatists in the beginning, they just wanted home rule in Ukraine—that they had the capability. But there’s a debate, because this plane was flying at commercial levels, normally beyond the reach of what they can carry on their shoulders.

There’s the possibility that the Russians aided and abetted them, possibly from Russian territory, but I rule that out because, in the end, when you don’t know who has committed a crime, the first question a professional investigator asks is, “Did anybody have a motive?” and the Russians certainly had no motive here. This is horrible for Putin and for the Russian position.

That’s what we know so far. Maybe we’ll know more. We may never know who did this.

JUAN GONZÁLEZ: Well, the Obama administration has expanded U.S. sanctions on Russia in the latest round of a standoff over Ukraine. Speaking at the White House, President Obama said Russia has failed to drop military support for pro-Russian separatists.

PRESIDENT BARACK OBAMA: Given its continued provocations in Ukraine, today I have approved a new set of sanctions on some of Russia’s largest companies and financial institutions. Along with our allies, with whom I have been coordinating closely the last several days and weeks, I have repeatedly made it clear that Russia must halt the flow of weapons and fighters across the border into Ukraine, that Russia must urge separatists to release their hostages and support a ceasefire, that Russia needs to pursue internationally mediated talks and agree to meaningful monitors on the border.

STEPHEN COHEN: Sanctions are beside the point. Obviously they’ll cause economic pain, possibly equally to Europe, which doesn’t want them, didn’t want them. Major American corporations took out ads in major American newspapers before Obama did this, asking Obama not to do it. When you resort to sanctions, it means you have no policy. You have an attitude. And the anti-Putin attitude in Washington is driving American policy.

Let me mention, because I think it’s relevant to what you’re covering here, your very, very powerful segments before I came on today about what’s going on in Gaza, the pounding of these cities, the defenselessness of ordinary people. The same thing has been happening in East Ukrainian cities—bombing, shelling, mortaring by the Kiev government—whatever we think of that government. But that government is backed 150 percent by the White House. Every day, the White House and the State Department approve of what Kiev’s been doing. We don’t know how many innocent civilians, women and children, have died. We know there’s probably several hundred thousand refugees that have run from these cities. The cities are Donetsk, Luhansk, Kramatorsk, Slovyansk—a whole series of cities whose names are not familiar to Americans. The fact is, Americans know nothing about this. We know something about what’s happening in Gaza, and there’s a division of opinion in the United States: The Israelis should do this, the Israelis should not do this. But we know there are victims: We see them. Sometimes the mainstream media yanks a reporter, as you just showed, who shows it too vividly, because it offends the perception of what’s right or wrong. But we are not shown anything about what’s happened in these Ukrainian cities, these eastern Ukrainian cities.

Why is that important? Because this airliner, this shootdown, took place in that context. The American media says it must have been the bad guys—that is, the rebels—because they’ve shot down other airplanes. This is true, but the airplanes they’ve been shooting down are Ukraine’s military warplanes that have come to bomb the women and children of these cities. We don’t know that.

AMY GOODMAN: There have been several discussions—in the corporate media, it was said that this plane might have had a sort of unusual path, had gone further south, and that they thought it was a Ukrainian military plane.

AMY GOODMAN: Also, in terms of the black boxes, that Ukrainian officials and NTSB cannot get there because it’s rebel-held territory, and that the rebels might have taken the black boxes.

STEPHEN COHEN: Well, the rebels have said they’re going to turn them over to Moscow, and Moscow will not conceal them. I mean, Moscow is going to play openness, so far as we know. But what’s preposterous, of course, is the prime minister of Malaysia coming out and telling us that Malaysia will uncover this mystery, when it still can’t find its missing airliner. This is just absolutely preposterous. But you’re right, the investigation is going to be politicized. Will we ever know?

JUAN GONZÁLEZ: Well, that’s one of the reasons that—well, what I wanted to ask you is, because of what’s been going on in Syria, in Iraq, and now with the Israeli attacks on Gaza, it’s almost as if what’s going on in Ukraine has receded in the consciousness of the media here in this country, even though it’s conceivably much more dangerous and has more long-term impact on the United States.

STEPHEN COHEN: I don’t want to prioritize death—I mean, whose death is worse or not so worse. But the reality is, if you’re going to ask an historian, that the conflict in the Middle East, including Iraq, is going to affect regional politics, but the conflict in Ukraine is going to affect global politics, because we are now in a new Cold War with Russia. We have been for several months. One aspect of cold war is civilian deaths. We’ve had these shootdowns. We had them in the old Cold War. This is going to get worse. It also brings us closer to war between Russia and the West, NATO and the United States. So, if you’re going to ask which is more important—Russians have a saying that, which is worse? And the answer is, both are worse. They’re all worse. But if you’re going to ask which is going to have impact for our grandchildren, it’s what’s going on in Ukraine now.

AMY GOODMAN: We only have 30 seconds, but Obama announcing stricter sanctions against Russia, how significant is this? It was a day before the downing of the plane.

STEPHEN COHEN: I’ll repeat what I said before: By resorting to sanctions, Obama reminds us he has no policy toward Ukraine or Russia other than to blame Putin. That’s not a policy; that’s an attitude.

AMY GOODMAN: Well, Stephen Cohen, professor emeritus of Russian studies and politics, New York University and Princeton University. We’ll link to his piece in The Nation. His latest book, just out in paperback, Soviet Fates and Lost Alternatives: From Stalinism to the New Cold War.

That does it for our show. I’ll be speaking at the Mark Twain House & Museum in Hartford, Connecticut, Monday, July 21st, at 7:00, and then on July 26th on Martha’s Vineyard. That’s Saturday, 7:00 p.m., Katharine Cornell Auditorium in Vineyard Haven. Check our website at democracynow.org. 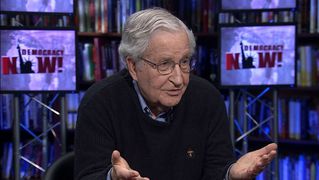