The mass killings in Shejaiya have helped push the Palestinian death toll to more than 500 during the two-week Israeli assault on Gaza. The dead include more than 100 children. Some 3,100 people have been wounded and more than 81,000 displaced. The U.N. agency for Palestinian refugees, UNRWA, has warned it is running out of food and medicine at the schools housing more than 50,000 people. The number seeking refuge has nearly tripled since the ground invasion began on Thursday. At least 130 Palestinians have been killed during that time. We speak with Raji Sourani, director of the Palestinian Center for Human Rights in Gaza and human rights lawyer whose accolades include the Robert F. Kennedy Human Rights Award and the Right Livelihood Award.

AMY GOODMAN: This is Democracy Now!, democracynow.org, The War and Peace Report. I’m Amy Goodman, with Aaron Maté. And we’re staying in Gaza right now in Gaza City, where we’re joined by Raji Sourani, who is an award-winning human rights lawyer, the director of the Palestine Center for Human Rights in Gaza. He’s on the board of the International Federation for Human Rights. He received the Robert F. Kennedy Human Rights Award in 1991, twice named an Amnesty International prisoner of conscience, in 2013 won the Right Livelihood Award, which is presented in the Swedish Parliament.

Raji, we welcome you to Democracy Now! and ask you to describe the situation, at this point, and what you feel needs to happen.

RAJI SOURANI: It doesn’t need really to describe, what you see here, what you see in Shejaiya area, where yesterday the Israelis committed a very real serious massacre against civilians. They killed tens of people; 75 has been counted, and tens under rubble yet. And almost 430 has been injured, many of them with very serious injuries. And 150,000 fled the area. Now they are doing, in Gaza, Gaza Doctrine, Shejaiya Doctrine, like Dahiya Doctrine in the past. They are razing the entire area in Gaza. That’s the Gaza Doctrine. That’s what the Israelis are doing. In the eye of the storm, civilians, civilian targets; they are doing war crimes, crimes against humanity. This is very outrage. This is unprecedented. This is what’s called, simply, state terrorism.

AARON MATÉ: Raji Sourani, so many have died since the Israeli ground invasion last week, and that was launched after Hamas rejected the ceasefire from Egypt. Israeli Prime Minister Benjamin Netanyahu used that as a pretext, saying that Hamas’s rejection gave him the legitimacy and the international backing. Hamas, of course, their position is clear: They want to return to the November 2012 ceasefire, which had some provisions about lifting the blockade of Gaza, easing it. Can you talk about why this is so important, the effects of the siege on Gaza?

RAJI SOURANI: First, Hamas resistance group, they are part of us, part of our chemistry. Two, we have this Israeli belligerent occupation sitting on our chest for the last 47 years. We have the siege, which is suffocating us, socioeconomically and otherwise, turning Gaza, with the two million people in the 300 square kilometers, to be like animal farm, suffocated socioeconomically and otherwise. That turned Gaza to be with 65 percent of unpaid or unemployed and 90 percent under poverty line and 85 percent dependent, counting on UNRWA rations and World Food Program. They shifted us to be a nation of beggars. We are not like that. We have one of the highest education percentage in the world and university graduates. We have no illiteracy. We have very skilled working class. We have one of the most wonderful business community. But they made in Gaza de-development. That’s what Israel did through eight years of criminal, inhuman, illegal siege. That’s at least what the ICRC and all the international human rights organizations. In five years, we are subjugated to three wars—in 2009, ’08, Pillar of Defense, and in 2012 November and this war.

We are not here in defense of Hamas or the resistance group. They are competent. They can defend themselves. And I think they are doing fantastic with the Israelis in Gaza. But we are in defense of Palestinian civilians, who are entitled to protection according to international law, international humanitarian law, and human rights, entitled to protection according to Geneva Convention. We are called in law the protected civilians, and what Israel is doing, we are in the eye of the storm: We are the target. We are in the head of the basket of targets, Israeli [inaudible]. Great Israel killed all these children and women. Do you know 86 percent of those so far has been killed and injured, which we documented as a human rights organization, are civilians. This morning, I have been to Shejaiya, Abu Jamaa family. Twenty-five members of family, three-stories building leveled, none of them do exist on life. Is that the heroic act? At al-Aqsa Hospital, subjugated to bombardment, 15 has been killed in the last hour. Now, a Shejaiya Doctrine, Gaza Doctrine, they’re razing the entire area. All these acts are against civilians. This is the fifth strongest army in the world, with the high tech, with the intelligence. They are targeting civilians.

AMY GOODMAN: Raji Sourani, I want to play for you a comment of Israeli Prime Minister Benjamin Netanyahu, who recorded this message, he said, for the people of Gaza.

PRIME MINISTER BENJAMIN NETANYAHU: I want to use this opportunity and speak to the people of Gaza: Heed the warnings of the IDF, of the Israeli army. Leave your homes to the places where you’re told to go. Leave. Don’t stay there, because Hamas wants you to die. And you shouldn’t die for Hamas. They don’t care about you. But we want you to be safe.

AMY GOODMAN: That was Israeli Prime Minister Benjamin Netanyahu. That is posted on the Israeli government page. Raji Sourani, your response?

RAJI SOURANI: A, Binyamin Netanyahu committed quite a lot of war crimes and crimes against humanity, and he is responsible about deaths and what’s going in this hour. And I can assure you one thing: We will hold accountable. We will hold him accountable one day. He will be brought to the court of law. This rule of jungle he and his government doing against civilians will pay dearly for it. He is the same like bin Laden and many others, the one who targets civilians, kills civilians, destroys civilians and innocent people. He is doing and committing war crime, and he is doing that deliberately.

Second, he just gave confession that he is doing war crime. He is asking people, almost one half-million people out of there, to warn they should leave their place and evacuate their houses because they are going to bomb and shell and kill Hamas people. Where to go? Is there a safe haven in Gaza? Is there a safe place in Gaza? No safe haven in Gaza. It’s 365 square kilometers, two million living in it. This is one of the most dense populated area on Earth. Sea, land, air and sea, nowhere to go. Even safe passage, usually provided during time of war, it’s not provided, I mean, to us. You cannot feel safe anyplace in Gaza.

AMY GOODMAN: Raji Sourani, the Israeli government is saying they’re doing this because Hamas is firing rockets that terrorize the Israeli population from Gaza. Your response to that?

RAJI SOURANI: A, we are in defense of Palestinian blood and suffering and civilians. And the count here, terrible. We have already, by this minute—and this number candidate to be increased—536 has been killed. As I said, 86 percent of them are civilians, women and children, basically. And we have hundreds of those who has been injured candidates. Yesterday, only yesterday, we have in Shejaiya this massacre, which raised the number. At that day, only yesterday, up to 135 killed in one day, mostly and basically just civilians.

Israel doing grave. Occupation, like somebody standing on quicksand, every move they are doing, they are sinking. And the worst, it’s the moral sinking. Israel doesn’t feel they are committing war crimes, crimes against humanity. That’s because of the entire American legal, political support. That’s because the entire support by U.K., France, Germany, Western Europe, to them. They feel immune. There is no accountability whatsoever. They have free hand. Our blood is so cheap, our suffering so cheap, our civilians are so cheap to kill and destroy.

AMY GOODMAN: Raji Sourani, thank you so much for joining us, joining us from Gaza City. In the background we hear the bombing and the attacks. Raji Sourani is an award-winning human rights lawyer, director of the Palestinian Center for Human Rights in Gaza, on the executive board of the International Federation for Human Rights, has received many awards, including the Robert F. Kennedy Human Rights Award and twice named Amnesty International prisoner of conscience, last year won the Right Livelihood Award. This is Democracy Now! When we come back, we go to Haifa to hear about an Israeli peace protest of hundreds. Stay with us. 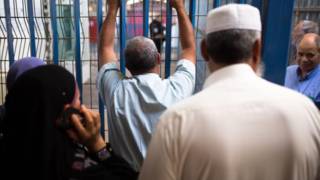