VIDEO: “We are All Michael Brown” — NYC Parents Whose Kids Were Killed by Police Rally for Justice

Thanks to Democracy Now! fellows Messiah Rhodes and Anna Özbek for producing this video.

Parents with children killed by police were among those who attended a rally in front of New York City police headquarters on Monday to demand justice in the murder of Michael Brown and similar cases.

“We’re out here because they’re killing innocent people in the street, in their homes, like they did to my son, Ramarley,” said Frank Graham.

Ramarley Graham was unarmed when he was shot at close range last February, in front of his six-year-old brother and grandmother, after narcotics officers chased him into his Bronx apartment. Police say Graham was trying to empty a small bag of marijuana into the toilet before he was killed. The officer who shot him was indicted for manslaughter, but a judge reluctantly threw out the indictment in May on procedural grounds. Earlier this year another grand jury chose not to indict the officer a second time.

More than a year has passed since the U.S. Justice Department indicated it may review Graham’s case. The family says it has no indication federal officials are conducting a full investigation by interviewing witnesses, as is occurring in the case of Michael Brown. On Wednesday, Graham’s family and supporters plan to deliver thousands of petitions to the U.S. Justice Department and call for a meeting with U.S. Attorney Preet Bharara.

Police shootings and misconduct have been monitored locally by groups like the Malcolm X Grassroots Movement and Copwatch, which is also looking into alleged police harassment of Ramsey Orta, who filmed Eric Garner’s fatal encounter with New York Police in July. Garner died after police placed him in a chokehold and pinned him to the ground while he repeatedly said he couldn’t breathe. A day after the medical examiner ruled Garner’s death a homicide, police arrested Orta on weapons charges.

A We Will Not Go Back march calling for justice in the case of Eric Garner is planned for August 23rd and is sponsored by Rev. Al Sharpton’s National Action Network, the NAACP and local 1199 SEIU, as well as other groups.

FRANK GRAHAM: We’re out here because they’re killing innocent people in the street and in their home, as they did to my son Ramarley. There’s what we’re asking for, for these criminal cops to stop, because they are criminals, because they have these signs all over, “If you see something, say something,” but they don’t say nothing when they see their buddies beating or killing people. That blue wall is silent.

ANITA NEAL: They did not come to me and tell me anything. I begged, and I’ve rallied every 21st to make sure I’m going to get justice for my daughter!

LINAD TIGANI: Families are out here today who have their sons, their daughters, their lovers, their friends to police violence. We have folks that are mentally ill who were killed when their families were calling 911 for help. So if we cannot call 911 for help, then we see that chants like “Resistance is justified” when people are occupied, those chants become real.

FRANK GRAHAM: Honest, I’m tired of walking in the street and shouting, “No peace! No justice, no peace!” because that’s not doing anything. It’s really not doing anything. We have to take it another step. What does that mean? We have to disrupt business. I’m not saying loot, burn, none of that. I’m saying disrupt business. I’m saying take to the bridges, take to the tunnels. We have to make these businesspeople who work on Wall Street and Park Avenue, make it hard for them to get to work. Then they’ll understand what’s going on. Then they’ll start asking their elected official, “What’s going on? Why is this happening?”

StoryJun 08, 2020“The Time Is Now”: Tens of Thousands in NYC March for Justice, Peace & an End to Racist Police 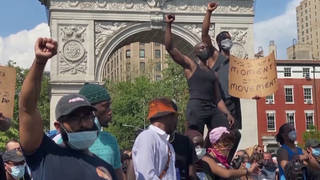