A Columbia University senior who says she was raped on campus by a fellow student has launched an unusual act of protest. Emma Sulkowicz has vowed to carry a dorm room mattress with her everywhere on campus until her rapist is expelled or leaves campus on his own. Sulkowicz says she was raped in her own dorm room in August 2012. That was only the beginning. After she reported her assault to Columbia, she appeared before a disciplinary panel, where she was forced to explain to a university official how the painful manner in which she had been raped was physically possible. Then the panel found her accused assailant not responsible. Two other students have accused the alleged perpetrator of sexual assaults, but he remains on campus. Sulkowicz joins us to tell her story.

That was only the beginning. After she reported her assault to Columbia, she appeared before a disciplinary panel where she was forced to explain to a university official how the painful manner in which she had been raped was physically possible. Then the panel found her accused assailant not responsible.

Two other students also came forward and filed complaints against the same person, accusing him of sexual violence. In one case, the alleged assailant was found responsible, but the charge was ultimately dismissed after he filed an appeal with the dean of his college. The dean convened a whole new hearing, which did not involve the survivor at all, because she had graduated. In the second case, the university denied the woman a hearing, citing a lack of evidence.

So, Emma Sulkowicz’s alleged rapist remains on campus. As her senior thesis project this year, Emma launched the mattress performance, “Carry That Weight.” She has since received a wave of support. Last Wednesday, students gathered to help Emma carry her mattress across campus to school to all her classes. On Friday, hundreds of Columbia students and supporters rallied in front of Low Library. They wore red tape over their mouths to symbolize the harms done by Columbia’s bureaucratic handling of sexual assault. Emma Sulkowicz addressed the crowd.

EMMA SULKOWICZ: This isn’t a shouting speech, but I have to shout anyway. So, thank you so much for being here. All the support I have received since beginning this endurance piece has been so overwhelming and moving that I am at a loss for words. Your emails, your thank yous and your help carrying my mattress has shown me that we really do care. We are more determined than ever to end sexual assault on this campus, and across the nation a movement is rising. Your passion is strong and contagious.

Now, more than ever, we must continue to spread sensitivity to others and a true understanding of what it means to be a survivor. This is urgent. We must show the world why this matters. In this fight to end the silence, every voice counts. And this is why I thank you all again for coming today. I believe that a survivor’s greatest asset is their support. And to see you all here together is a beautiful sight. It is a reminder that we do have support because we have each other. Thank you.

AMY GOODMAN: That was Emma Sulkowicz speaking at Columbia University on Friday. She joins us now here on Democracy Now!

We did invite Columbia University to join us on the program, but they didn’t make any school official available. The university did, however, provide a statement to us that read in part, quote, “These matters are extremely sensitive, and we do not want to deter survivors from reporting them. The University therefore does not comment on these matters.”

EMMA SULKOWICZ: Thank you for having me.

AMY GOODMAN: This performance piece that you were doing throughout the year, talk about how you came up with this idea.

EMMA SULKOWICZ: Well, I first came up with the idea when I was at an art residency this summer, and I was making a video where I had to move a mattress out of a room. And sort of the idea of me carrying a mattress got stuck in my head, as a song might get stuck in someone’s head. And I unpacked the image and realized all of the symbolic importance of what it would mean to carry a mattress around with me at Columbia, and I realized I had to do it.

AMY GOODMAN: What does it mean?

EMMA SULKOWICZ: Well, in my case, I was raped in my own bed. And, of course, rape can happen anywhere, but for me, it sort of desecrated one of the most intimate and private places of my life. And the way that I’ve brought my story from a place that I keep secret out into the public eye sort of mirrors carrying the mattress itself out into the light for everyone to see. So I felt like it would be an appropriate metaphor.

AMY GOODMAN: When did the attack happen?

EMMA SULKOWICZ: It happened on the first day of my sophomore year.

AMY GOODMAN: And what did you do about it afterwards? Who did you report it to?

EMMA SULKOWICZ: Immediately afterwards? Well, at first, I didn’t even tell my parents. It was very—I was very ashamed, I felt disgusting, and I didn’t want to talk about it at all. But after I met other women that my rapist had attacked, as well, I realized that if I didn’t—if I didn’t do something, he would continue to rape other students on our campus. So, that’s when I decided to report it to the school.

AMY GOODMAN: And what did the school do?

AMY GOODMAN: She asked you to explain this in front of the panel?

EMMA SULKOWICZ: Yeah. And then, the investigation itself was a total mess. The investigator didn’t even include the position I was in when he raped me in the report that was ultimately given to the hearing panel, because I guess she didn’t think it was an important detail, even though I repeated it multiple times. The list goes on, but…

AMY GOODMAN: And what did the panel find?

EMMA SULKOWICZ: They found him not guilty of assaulting me.

AMY GOODMAN: This was two years ago?

EMMA SULKOWICZ: This was at the beginning of my junior year.

AMY GOODMAN: The rape happened two years ago, but this was the beginning of your junior year where the panel finished.

AMY GOODMAN: Now, in the case of the other two women, another woman went before the panel, like you did?

EMMA SULKOWICZ: Yes, another woman—one woman was denied a hearing, because they told her she didn’t even have enough evidence to have one, which I believe is the hearing panel’s decision to make, but the school decided to cut her off short. And the other woman had the hearing. They found him guilty of groping her at a party, but then he submitted an appeal to the dean of his college, who, by the policies, has full autonomy to decide the case however he wants. So, he, the dean, Dean Valentini, convened an entirely new hearing panel, even though the woman had already graduated, with hearing panels who never heard her voice. And, of course, they found him not guilty in the new hearing.

AMY GOODMAN: So, right now you are dragging this mattress everywhere you go on campus?

AMY GOODMAN: And do people help you?

EMMA SULKOWICZ: Yeah, most of the time. As soon as someone—as soon as I leave the room, someone will jump in and help me. But a lot of people will even come up to me and say, “Thank you so much for what you’re doing,” and then walk next to me while I carry it.

AMY GOODMAN: And what has been the university’s response?

AMY GOODMAN: You reported this to Columbia University, the attack. Did you report it to the police?

EMMA SULKOWICZ: I did report it to the police.

AMY GOODMAN: And so, what happened in that case?

EMMA SULKOWICZ: The first responder told me that what happened to me was consensual. He kept insisting that it wasn’t rape, he just got a little weird. Zoe came with me, and he was smoking a cigarette in our face, and when she asked him to put it out, he said, “Quiet down, honey. You’re in my office now.” He really made me feel unsafe and like I couldn’t trust the police at all.

AMY GOODMAN: And were charges ever brought?

EMMA SULKOWICZ: Ultimately, the District Attorney’s Office told me that a hearing—it would take about nine months to a year for a hearing to happen, and by that point, I would have already graduated. And I have a feeling that as soon as I graduate, I’m going to want to move on with my life.

AMY GOODMAN: You were just referring to Zoe Ridolfi-Starr, who also will join us after break. We’re talking to Emma Sulkowicz, a senior at Columbia University. She reported her assault, went before a panel. That was in 2013. Now, in 2014, after the university ultimately found the alleged rapist not responsible, she has begun a performance piece, which is carrying her mattress around campus everywhere she goes. This is Democracy Now! We’ll be back with Emma Sulkowicz in a moment.

“We Will Not Be Silenced”: Students Denounce Rape at Columbia as Schools Face Scrutiny for Inaction

NEXT“We Will Not Be Silenced”: Students Denounce Rape at Columbia as Schools Face Scrutiny for Inaction 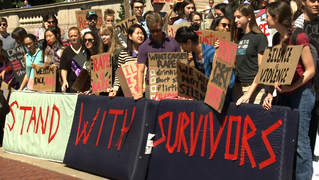 “The Hunting Ground”: Film Exposes How Colleges Cover Up Sexual Assault and Fail to Protect Students