We continue our coverage of Pope Francis’s visit to the Philippines, the country most impacted by global warming, ahead of his plans to issue the first-ever comprehensive Vatican teachings on climate change. The pope recently said the warming planet is “frequently exploited by human greed and rapacity.” We are joined by Nathan Schneider, a columnist at America magazine, a national Catholic weekly magazine published by the Jesuits, where he has been covering Catholic engagement with climate change. “This is a different way of thinking about economics that is a part of Catholic tradition,” Schneider says. “Pope Francis talking about the environment, about creation, is not an innovation; it is a response to a contemporary crisis. But it goes way back, to the scriptures, to Genesis.” Schneider’s recent article is “A Global Catholic Climate Movement, None Too Soon.” He is also an editor at Waging Nonviolence and the author of “Thank You, Anarchy: Notes from the Occupy Apocalypse.”

JUAN GONZÁLEZ: We continue our coverage of Pope Francis’s visit to the Philippines. He’s set to make history by issuing the first-ever comprehensive Vatican teachings on climate change. Given the sheer number of people who identify as Catholics worldwide, the pope’s call to tackle climate change could reach far more people than even the largest environmental groups. Globally, there are 1.2 billion Catholics, of which around 100 million live in the Philippines. The pope also plans to address the United Nations General Assembly and convene a summit of the world’s main religions in hopes of bolstering this year’s crucial U.N. climate meeting in Paris.

AMY GOODMAN: For more, we’re joined by Nathan Schneider. He’s a columnist at America magazine, a national Catholic weekly magazine published by the Jesuits, where he’s been covering Catholic engagement with climate change. His recent blog post called “A Global Catholic Climate Movement, None Too Soon.” Nathan Schneider is also an editor at Waging Nonviolence and the author of Thank You, Anarchy: Notes from the Occupy Apocalypse.

We welcome you to Democracy Now!, Nathan. Talk about the significance of what the pope is doing around climate change in this year leading up to the Paris binding summit.

NATHAN SCHNEIDER: Well, it’s so important that he’s going to the Philippines at this moment, as he’s wrapping up the writing of this important encyclical on the environment, because the Philippines is a reminder that climate change affects the poor first and the most. And that’s something that he recognizes and that’s so important. This is not a boutique issue. This is not a luxury. This is something that is affecting the most vulnerable people on this planet first. And I think that’s what the pope is really trying to emphasize and what the people of the Philippines are so eager to show the world.

JUAN GONZÁLEZ: Nathan, you have written in the lead up to this, now, this encyclical that he’s announcing, of the concept of the commons in the church teaching, from the Medieval times in the Christian Church. Could you expound on that?

NATHAN SCHNEIDER: Yeah, absolutely. You know, this is a different way of thinking about economics that’s a part of Catholic tradition. You know, Pope Francis talking about the environment, about creation, is not an innovation. It’s a response to a contemporary crisis, but it goes way back. It goes back to the scriptures, to Genesis, to God’s enjoyment of stewardship over the Earth. And then, in the Middle Ages, a concept was integrally part of Catholic legal tradition that all things are common and that all things are the common inheritance of human beings, that property is kind of a subset of that, and that, ultimately, it is incumbent on all people to protect the planet and to ensure that it is protected for generations to come.

AMY GOODMAN: The pope recently had to defend himself against comments that he was communist. Can you explain what happened?

NATHAN SCHNEIDER: I think that’s really a red herring. The pope is talking about something that, again, is a part of long-standing Catholic social teaching, which is the preferential option for the poor, that Catholic social reflection should begin with the needs and the voices of the poor. If that’s communist, I don’t know. There are so many ways in which Pope Francis certainly wouldn’t affirm things that traditional communist Marxist doctrine would affirm about atheism, maybe something about state control.

Another thing that’s really important to recognize about Catholic social teaching is this concept of subsidiarity, that the economy should begin from the local level and build from the ground up. And that’s why Pope Francis and other popes have talked about the importance of cooperatives. Again, this goes to the commons, a kind of economy that is built by the people, for their needs, not for the sake of a market, for the sake of short-term profits.

JUAN GONZÁLEZ: And the significance of his choosing an encyclical at this time, what—the role of encyclicals within the Catholic Church?

NATHAN SCHNEIDER: This is a very important statement, a statement that will be authoritative and that will guide the moral reflection of Catholics around the world. And it also sets a priority that’s incredibly important. And the pope has made a point also of issuing the statement before the Paris meeting in December. And so, he’s really intending it not just for Catholics, but for the world, as a statement that this is not just a matter of scientific consensus; this is not, you know, merely a debate. This is a matter of moral urgency.

NATHAN SCHNEIDER: Yeah, absolutely. You know, on the one hand, some of our most prominent and vocal Catholics in this country, in particular, have been very silent on climate change. But that doesn’t speak for all Catholics. For instance, the University of Dayton, a Catholic college, recently divested from fossil fuels, announced that they would divest their investments from fossil fuels. A growing number of Catholic orders and institutions are looking to do the same. You know, and one thing that you see when you go around to Catholic convents and monasteries around the country is a growing concern for transforming their own lives, transforming the ways that they operate. You see them growing their own food, using organic methods. You see them practicing green burial for their dead. You see them leading fights against hydrofracking, against other forms of carbon extraction. And they’re really setting a tone. And that goes way back, again. You know, these are traditions that are built on commitments to the land that they’re on. And this goes back to the Middle Ages. They’re built around a commitment to that stewardship, that, again, goes all the way back to Genesis through the tradition up to today.

AMY GOODMAN: Nathan Schneider, we want to thank you for being with us, columnist at America magazine, national Catholic weekly magazine published by the Jesuits, where he’s been covering Catholic engagement with climate change. We’ll link to your blog, “A Global Catholic Climate Movement, None Too Soon.” Nathan Schneider is also an editor at Waging Nonviolence and author of Thank You, Anarchy: Notes from the Occupy Apocalypse.

This is Democracy Now! When we come back, Boko Haram in Nigeria. Stay with us. 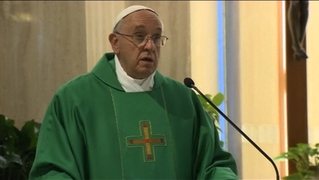