As Ava DuVernay considers her next steps after “Selma,” her first big budget feature film, she offers advice to aspiring filmmakers. “We have to work without permission. Especially as women in this industry. Who are we asking for permission to do what we want to do? That should be eradicated. You need to set a path and start walking.” DuVernay discusses her next feature film, which will be a love story and murder mystery set in New Orleans amidst the devastation of Hurricane Katrina, and recalls the impact acclaimed film critic Roger Ebert had on her life, who raved about one of her first projects, “I Will Follow.” “He lifted that film from nowhere, and lifted me up with it,” she says.

AMY GOODMAN: And for young people, women, people of color, as a young African-American woman director, what words of wisdom do you have to share, as you not look back on your career, but you continue to go forward?

AVA DUVERNAY: That’s exactly what it is. It’s go forward. You know, we have to work without permission, especially as women in this industry. Who are we asking for permission to do what we want to do? That should be eradicated. You need to set a path and start walking. And that is what I’ve tried to do and what I try to encourage folks to do—walk with me, let me walk with you, let’s walk with each other. And I think, you know, so much of the industry is very permission-based. And once you get out of your mind that you have to ask anyone to do what you want to do, you’ll be better for it.

AMY GOODMAN: What’s your next project?

AVA DUVERNAY: Oh, exciting project. My next project is a love story and a murder mystery set against the backdrop of Hurricane Katrina. I was really interested in examining how intimate relationships are frayed during chaos and to really look at the chaos. So I really embraced the idea in Selma of this kind of epic story, but also the intimacy of the relationships within it, and I want to continue that, looking at Hurricane Katrina. We’re coming up on 10 years of that, 10 years since that happened. And as a country, cinematically, as artists, it hasn’t been dealt with, I think. And so, I want to do it in the context of all the things that matter most, our lives and our loves, against that. So that’s what I’m working on.

AMY GOODMAN: It’s called Life Itself. What effect did Roger Ebert have, the film critic, on your life?

AVA DUVERNAY: If I had not come—crossed paths with Roger Ebert, I wouldn’t be sitting here with you right now, and I wouldn’t have made Selma. I had made a film called I Will Follow, that was going nowhere. Made it with my own money for $50,000. No one was reviewing the film. No one was booking the film. It was going to end up sitting on my shelf.

AMY GOODMAN: What was it about?

AVA DUVERNAY: It was about—it was a very intimate story about a woman who had recently lost her aunt and is packing up the house that they shared together. It’s about grief and moving on. And it’s a rare film with black protagonists. It’s very small, and it’s very quiet. There’s not a lot going on, like we usually see from films with black protagonists. And so, it was different. And I sent it to him, and I asked him if he’d look at it. But the nerve, the audacity. And he did. And he wrote one of the most beautiful reviews I’ve ever read, for anyone. And he wrote another one. And he tweeted 27 times and raved and told friends and did a TV review about it, when he was using Bill Kurtis’s voice for his voice. And he lifted that film from nowhere and lifted me up with it. And from that, I had the confidence to make Middle of Nowhere, which then won Sundance, and that brought me to Selma. And so, I can say very definitively—and I’ve said it to Chaz, and I said it in the documentary, which is gorgeous, Life Itself—one person can make a difference, and he made a difference for me. And I just hope he would be proud of this now. I hope he would.

AMY GOODMAN: Ava DuVernay, director of Selma. It’s been nominated for an Oscar for best film. 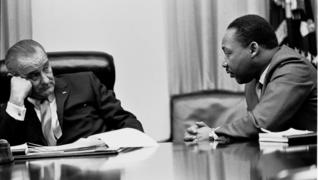