In Student Victory, U. of Mississippi Removes State Flag with Confederate Emblem

Early Monday morning, three campus police officers at the University of Mississippi removed the state flag with its Confederate emblem from the grounds of the school’s campus in Oxford. The move comes after the student government voted to remove the flag. Mississippi’s flag is the latest Confederate symbol to be targeted for removal from a public space since a white supremacist killed nine African-American worshipers in Charleston, South Carolina, four months ago. We speak to Dominique Scott, an undergraduate at the University of Mississippi and the secretary of the university’s chapter of the NAACP.

AMY GOODMAN: We will end today’s show in Mississippi. Early Monday morning, three campus police officers at the University of Mississippi in Oxford removed the state flag with its Confederate emblem from the grounds of the school’s campus. The move comes after the student government voted to remove the flag.

Dominique, welcome back to Democracy Now! We just talked to you last week when the vote of the student Legislature, the student Senate, was about to take place. You voted to take the flag down, but that was just advisory. What happened?

DOMINIQUE SCOTT: Well, on Tuesday, the ASB elected to pass Resolution 15-3 to take down the Mississippi state flag, the current Mississippi state flag, from the university. It came as—I believe it was 33 to 15—33 in favor, 15 opposed and one abstained. Right after that, Staff Council passed their resolution in support. And on Thursday, Faculty Senate passed their resolution with 14 in favor and one opposing. And then the graduate school passed theirs. And yesterday morning, they took it down.

AMY GOODMAN: Were you surprised?

DOMINIQUE SCOTT: I was very surprised. It was done in a very—it was very secret. Nobody really knew about it. I just woke up. I always check my email when I wake up. And so, when I woke up, and there was an email that said they took it down, and I was just like, “Wow!” And I checked my email actually before I even checked my text messages. So my text messages were booming with all my friends saying, “Oh, my gosh, they did it! They did it!”

AMY GOODMAN: So, Dominique Scott, the chancellor and the offices of the administration had originally said this isn’t about us taking it down, this is about the Mississippi flag having the Confederate flag within it. Are you moving on to the state flag, removing the Confederate symbol in it?

DOMINIQUE SCOTT: Well, in the resolution, there was an amendment made that said that the students would pursue pressuring the state to change the Mississippi state flag. The issue with the flag is the Confederate emblem, and it is not the state flag itself. It’s the current flag as it is.

AMY GOODMAN: How do you feel, having started a revolution in Mississippi?

DOMINIQUE SCOTT: I feel like it doesn’t stop here. I feel like we might be having some more conversations later on in the year, because we have a lot of things planned. You know, Angela Davis—I believe it was Angela Davis—said, “The revolution isn’t a one-time thing.” So, there’s a lot of things going on on our campus. There’s a lot of issues. And, you know, I think it’s so awesome that students have built power. I’m so wonderfully proud of what we’ve done. And—

AMY GOODMAN: Dominique Scott, we’re going to have to leave it there today. 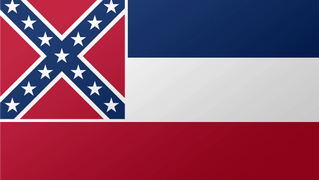