Abdel Bari Atwan: Inside How the U.S. & Saudi Arabia Aided Growth of the Islamic State

Two days after the Paris attacks, President Obama met Saudi Arabia’s King Salman for a bilateral meeting at the G20 summit in Turkey on Sunday. The following day, the Pentagon revealed the U.S. State Department has approved the sale of $1.29 billion in smart bombs to Saudi Arabia for its attack on Yemen. We speak to Abdel Bari Atwan about how the U.S. invasion of Iraq and the Saudi funding of jihadist movements helped the Islamic State grow.

AMY GOODMAN: Can you talk about the role of Saudi Arabia? President Obama held a bilateral meeting with Saudi Arabia’s King Salman at the G20 summit in Turkey Sunday.

ABDEL BARI ATWAN: You know, Saudi Arabia is the origin of radicalism, Islamic radicalism, in the Middle East and the whole world and the whole Islamic world. Why? Because al-Qaeda ideology—sorry, Islamic State ideology is the same Wahhabi ideology which adopted by the Saudi kingdom. This is—you know, they go back to the time of Muhammad ibn Abd al-Wahhab in 1704, you know, so they are doing—doing exactly the same. They are doing in Syria and Iraq this brutality, this savagery, the Wahhabism of the Saudi regime in 1705 and ’06, when they actually invaded Karbala and Najaf. They committed the same massacres.

So, Saudi Arabia, actually, now, they are—they are, actually, with Qatar and with Turkey. They have some sort of alliance. And they started the problem in Syria. They poured billions in Syria, hoping to topple the Assad regime for personal revenge, not for political means, not for actually, you know, a strategic move from their side. They just want to take revenge, personal revenge, because Assad insulted them in a way or another, and also because they thought that they can topple him in a few weeks, few months maximum. So they poured billions of weapons. And also, they encouraged a hundred—sorry, tens of thousands of volunteers to go through Turkey to Syria to fight against the Assad regime.

This is—all this was happening while the West actually don’t understand. They were misled by Turkey and Saudi Arabia and Qatar. This is a fact. When I said they misled, because they did not actually manage to understand this phenomena. They underestimated the emergence of such a radical organization or a state like the Islamic State, which we are witnessing now. This is—this is the problem. Saudi Arabia, until now, they are saying, “We must topple Assad regime.” You know, OK, topple Assad regime, you topple the Gaddafi regime, you topple the Ali Abdullah Saleh regime in Yemen. So what happened? Where is the plan B? Have you built—rebuilt Libya, for example? Did you set a good example in Iraq, in Libya, in Yemen, in Syria? What’s the plan after Assad, for example? Who will rule Syria? Is it going to be democracy? Or is it going to be like Libya? Is it going to be like Iraq, divided on the sectarian lines? This is the problem.

Yes, Saudi Arabia now, they managed to influence the American White House, the American position, because in your country—this is the problem. Now—you know, until now, the American policy in the Middle East is a complete shamble. You know, there is no policy, honestly. In six months ago, they said we should give the priority of rooting out the Islamic State. Said, “OK, great.” And then, now, because of the Saudi-Turkish-Qatari influence, they said, “No, we have to actually—there is no future for Assad in the political process.” Where is this political process? Has it started? Why didn’t it start, say, five years ago, when the problem started in Syria? Why we are waiting until now? You had five years to sort it out. You know, you did not sort it out.

AMY GOODMAN: It’s not only—

ABDEL BARI ATWAN: And then, when the Russians intervened in Syria to protect their man—

AMY GOODMAN: It is not only—

ABDEL BARI ATWAN: Yes. Yeah, you are absolutely right. You know, it’s a history there. The problem is, you know, when they were feeding radicalism in the Islamic world, introducing the Wahhabism as the Puritan interpretation of Islam and sharia law, the West used to work with them. They worked with them in Afghanistan, and it was very clear. And what happened after that? They toppled the communist regime in Kabul, and then, you know, they left anarchy there, bloody anarchy, Arab—so-called Arab mujahideen. And al-Qaeda emerged. Now, you know, they intervene in Syria. What happened? The Islamic State emerged. They intervened in Iraq. The same thing, al-Qaeda again, Abu Musab al-Zarqawi, al-Tawhid wal-Jihad organization emerged. So, usually, when there is uncalculated and underestimated intervention, actually, that’s what will happen in the Middle East. This is the problem.

AMY GOODMAN: How do you think the U.S.—

ABDEL BARI ATWAN: And we keep repeating the same mistakes, one after one. Yes?

AMY GOODMAN: How do you think the U.S. can put pressure on Saudi Arabia?

ABDEL BARI ATWAN: Oh, yes, they can. You know, they can. You know, President Obama was actually absolutely correct when he told to the Saudis, “Look, you know, we are not going to bomb Iran, you know, because you want us to bomb Iran. You know, OK, yeah, we can protect you from any Iranian danger. But, you know, your problem is your people. It is an internal problem. You have a population which is dissatisfied, those population completely marginalized. You know, those people are unemployed, and they have no future. They don’t have any role in actually determining their future.” So, this is—this is the problem. There are huge problems inside.

But you cannot actually keep arguing, and while thousands—hundreds of thousands of people are killed, and 7,000 sorties. We don’t know what these air sorties are killing, for example. How many innocent people are killed because of it? I don’t believe there are these 7,000 air sorties killing al-Qaeda—sorry, Islamic State members. Definitely they are killing innocent people, civilians. Who will tell us how many civilians were killed? It is a completely taboo to talk about the deaths, civilian deaths, because of this allied bombardment of Syria and Iraq, you know, the Islamic State areas, while until now, also, in the same time, we don’t have any accurate figures by U.S. administration about how many people were killed in Iraq because of the American invasion of Iraq. This is the problem. You know, once—if the death among your enemy, nobody counts. If the death among the American, among the British, among the French, it is well calculated, one by one. You know, this is discrimination. How can the people of the Middle East believe this kind of policy? How they are not going to fight this kind of hypocrisy in a way or another? We are giving, actually, ammunition to radical terrorist organization like al-Qaeda, like the Islamic State, by this kind of policies.

AMY GOODMAN: Abdel Bari Atwan, I want to get your response—

ABDEL BARI ATWAN: We have to be truthful to our people.

AMY GOODMAN: I want to get your response to the comment made by presidential candidate Bernie Sanders at Saturday’s Democratic presidential debate in Iowa.

SEN. BERNIE SANDERS: I would argue that the disastrous invasion of Iraq—something that I strongly opposed—has unraveled the region completely and led to the rise of al-Qaeda and to ISIS.

ABDEL BARI ATWAN: Yes, Amy, he is absolutely correct. I am personally proud to have American candidate saying the truth. We need the truth. Yes, the American invasion of Iraq created al-Qaeda, or strengthening al-Qaeda and created—or it created the incubator for the Islamic State, because, you know, they—as I said, under the banner of de-Baathification, they thrown millions of Iraqi ex-soldiers, ex-officers on the streets, without any hope, without any dignity, without any pension, nothing at all. And this is the hardcore of the Islamic State. That’s why those people are full of revenge, full of anger, full of blood. So, this is—yes, the American—I agree with Sanders. This is the invasion which created most of the problems.

OK, maybe it solved one problem—toppling a dictator, who—he was a dictator, no question about that. But what’s—how is Iraq now? Iraq is completely dismembered. Iraq is a failed state now. This is the problem. Do you believe that the Americans, the greatest superpower, the most sovereign, the most actually modern power, cannot actually fix Iraq, cannot create a democracy there, cannot create coexistence among the people? And what happened is the opposite, dividing them—this is Sunni, this is Shia. So, this is—this is the problem. Yes, it is—you know, we have to say the truth. The American invasion of the Middle East—Iraq, in particular—creating the environment, the best environment for the Islamic State and for al-Qaeda to continue their savagery, their terrorism, their brutalism against the people of that region.

AMY GOODMAN: Abdel Bari Atwan, I want to thank you for being with us, author of the new book, The Islamic State: The Digital Caliphate, longtime journalist who served as editor-in-chief of the London-based daily Al-Quds al-Arabi for 25 years, now runs the Rai al-Youm website, recently wrote an article, and we’ll link to it, at Salon, “America Enabled Radical Islam: How the CIA, George W. Bush and Many Others Helped Create ISIS.” We’ll have Part 2 of our discussion later this week. We’ll be back in a minute. 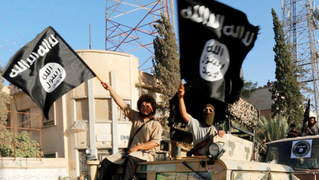