So far this year, more than 800,000 asylum seekers and refugees have arrived in Europe by sea. Human Rights Watch has just produced a short video capturing the harrowing journey to Europe. “Desperate Journey: Europe’s Refugee Crisis” is narrated by HRW’s Judith Sunderland.

Web ExclusiveNov 18, 2015Peter Bouckaert of HRW: Shutting the Door on Refugees Would Be Propaganda Victory for Islamic State

AMY GOODMAN: Friday’s deadly attacks in Paris have set off a storm of calls to close borders and reject refugees fleeing Syria, where over 4 million people have already fled the war-torn country. So far this year, more than 800,000 asylum seekers and refugees have arrived in Europe by sea. We’re going to turn now to a video by Human Rights Watch capturing this journey to Europe. The film is narrated by Human Rights Watch’s Judith Sunderland.

SYRIAN REFUGEE BOY: [translated] During our ride, the rubber boat started tipping. Kids were falling on top of each other, and women were falling on top of each other. The whole boat filled with water. Then the boat just stopped. We were whistling and calling for help. We contacted the Greek Coast Guard via WhatsApp, and they came and saved us. Life isn’t safe anymore. We can’t live in Syria anymore.

JUDITH SUNDERLAND: Over 800,000 asylum seekers and migrants reached Europe by sea this year. More than 200,000 arrived on the Greek islands in October alone. Most of them come from countries where conflict, repression and fear force people to flee for their lives.

AFGHAN REFUGEE WOMAN: [translated] The Taliban warned us to leave, or our lives would be in danger. They killed seven of my friends. They mostly targeted women.

JUDITH SUNDERLAND: And did they threaten you personally? They said to you, “You have to go”?

AFGHAN REFUGEE WOMAN: [translated] Yes, because I was educating people about violence against women in different Afghan provinces. That’s why I was threatened.

JUDITH SUNDERLAND: Over 3,400 people, including many children, have died at sea trying to reach the European Union this year. Yet despite the risks, they keep coming.

SYRIAN REFUGEE MOTHER: [translated] My daughters and I suffered so much. The decision to make the journey was very difficult. We knew it was a death journey. We knew our lives were at stake. But it didn’t matter if we lived or died. The risk was better than to continue living as Syrian refugees in Turkey.

VOLUNTEER 1: Where are you going now?

REFUGEE MAN 1: We are going down to Allemagne

JUDITH SUNDERLAND: How many days since they’ve had their medicine?

PETER BOUCKAERT: When did you leave Deir ez-Zor?

REFUGEE MAN 2: And the governments there said, “Go back to Hungary.”

JUDITH SUNDERLAND: We spoke to Syrians, Afghans, Iraqis, Eritreans and Somalis. In story after story, we heard that the only way out of violence and terror at home and unbearable conditions in neighboring countries was to resort to smugglers and flee through dangerous crossings.

JUDITH SUNDERLAND: If there were safe and legal routes to seek refuge, far fewer people would be at the mercy of abusive smugglers.

VOLUNTEER 2: Did you go to any embassy to apply for asylum?

AFGHAN REFUGEE WOMAN: [translated] I emailed the Canadian Embassy, but they didn’t reply.

JUDITH SUNDERLAND: We have witnessed scenes of chaos at many EU borders for months now. Daily arrivals of thousands of people on Greek islands created an ongoing humanitarian crisis, hitting those most vulnerable the hardest.

JUDITH SUNDERLAND: Most of those who reach Greece by sea continue their journey over land through the Western Balkans, encountering police abuse, terrible detention conditions and cascading border closures. Many EU governments are focused on preventing arrivals instead of managing the flow humanely. A plan to relocate tens of thousands of asylum seekers from front-line states like Greece and Italy has gotten off to such a slow start, at this rate it will take over 180 years to reach the target. And months into this crisis, with winter approaching, volunteers—not governments—are still at the forefront of providing humanitarian assistance.

REFUGEE WOMAN: [translated] Do something so that the refugees won’t suffer so much on the way. We have suffered a lot. We came on foot with small children. People are going to come here anyway, no matter how difficult. They are determined to come.

JUDITH SUNDERLAND: Until now, the response of EU governments to the crisis has been deeply flawed, defined by deaths at sea, chaos and distressing humanitarian conditions. People should not have to risk their lives or face so many obstacles to reach a place of refuge. The European Union has a legal and moral obligation to fairly process and humanely host asylum seekers and refugees, and respect the rights and dignity of everyone who arrives at its border.

SYRIAN REFUGEE MAN: We are from Syria, from Damascus. Damascus is a very good—before, before the war. We are just like here: We have money, we have houses, we have cars—we have everything. The war damaged everything.

JUDITH SUNDERLAND: So what do you need?

JUDITH SUNDERLAND: EU governments should ensure safe passage, access to asylum at and within its borders, and make sure human rights and compassion are at the heart of its response to this challenge.

JUAN GONZÁLEZ: Desperate Journey: Europe’s Refugee Crisis, narrated by Judith Sunderland of Human Rights Watch. Still with us is Peter Bouckaert, Human Rights Watch’s emergencies director. Peter, the volunteers that you’ve referenced and that we saw in that film, who are they? Where are they coming from? How are they being organized?

PETER BOUCKAERT: You know, I think that’s one of the most inspiring aspects of what is happening in Europe. We have apathy by European governments, but volunteers have come from all over the world to try to help these desperate people. We have Spanish lifeguards on the beaches with jet skis, rescuing boats when people fall in the water. Just last night, an Iraqi man fell off a boat and almost died. They spent 45 minutes looking for him in the night. And an Israeli doctor revived him and treated his hypothermia. It’s really that kind of coming together by volunteers which is saving so many lives.

AMY GOODMAN: And the last woman we saw in that piece, where was she from? The woman from—was she from Afghanistan?

PETER BOUCKAERT: Yes, she was from Afghanistan. Yes.

AMY GOODMAN: And what did she tell you?

PETER BOUCKAERT: Well, she told me, “The obstacles that we face in Europe are not going to stop us. We’ve walked over mountains to get this far, and we will get to our destination.” So the question really is: How difficult do we want to make this journey for people? Because they are determined to bring their children to safety.

AMY GOODMAN: How many people a day are landing on Lesbos?

PETER BOUCKAERT: On some of the days I was there, up to 5,000 people arrived. That’s a hundred boats.

AMY GOODMAN: By boat, a day?

PETER BOUCKAERT: By boat, yes. And you have to understand, those people are paying $1,200 for this trip, when there’s a legal ferry doing the same journey for 20 euros, which is empty.

AMY GOODMAN: Peter Bouckaert, we want to thank you very much for being with us, emergencies director for Human Rights Watch. 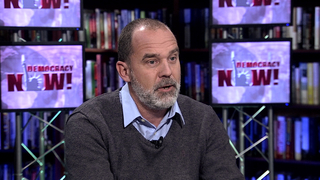 Peter Bouckaert of HRW: Shutting the Door on Refugees Would Be Propaganda Victory for Islamic State