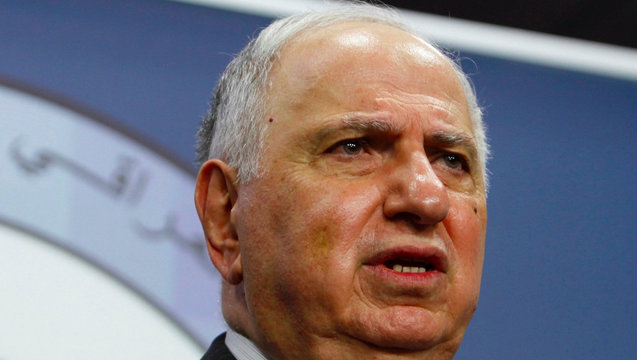 Iraqi politician Ahmed Chalabi, who played a key role in pushing for the 2003 U.S. invasion of Iraq, has died at the age of 71. Chalabi was the former head of the Iraqi National Congress, a CIA-funded Iraqi exile group that helped drum up pre-war claims that Saddam Hussein was developing weapons of mass destruction and had links to al-Qaeda. Chalabi provided bogus intelligence to the Bush administration, U.S. lawmakers and journalists.

Democracy Now! closely covered the rise and fall of Chalabi over the past 15 years.

Highlights from past coverage:

Funneling Fake Intelligence to Journalists
“[Ahmed Chalabi] and his group, the Iraqi National Congress, were basically funded by U.S. taxpayers, first by the CIA from '92 to ’96 and then later, after that, by the State Department, which was forced to fund him by the U.S. Congress. He had so many friends in Congress. But much of what they did—much of what the Iraqi National Congress did with that money, in part, was funneling stories to journalists. And he became immensely successful at it. And as we know, most of those stories were false. … One was the idea that Saddam Hussein trained hijackers to take over airplanes. That was one idea. It turned out to be false, but it was one story that found its way into Frontline, into The New York Times, into Vanity Fair. Another story was about Saddam's mistress, a woman they produced who said that she had seen Saddam dealing with Osama bin Laden. Again, this connects in the viewer’s mind the idea that there is a link between Saddam and Osama bin Laden, and therefore the terrorist attacks of 9/11. And then there were WMD issues that we all know about.” — Aram Roston, author of The Man Who Pushed America to War: The Extraordinary Life, Adventures and Obsessions of Ahmad Chalabi (3/26/08)

Ahmed Chalabi & Judy Miller
“Chalabi was deeply distrusted by the CIA and the State Department and, in fact, in the book, we interview—one of our key figures in the book is a man by the name of John Maguire, who was the CIA liaison with Iraq. He was in charge of Iraq and with Chalabi. And he distrusted Chalabi for years. He had actually looked into Chalabi in the mid-1990s, when Chalabi was first getting U.S. government money supposedly to propagandize within Iraq. Maguire goes to Iraq. He’s supposed to—Chalabi’s been getting money from the CIA to fund a TV station, to fund a newspaper, to propagandize against Saddam. And Maguire concludes that Chalabi is scamming the CIA, that he’s not using the money for what he’s supposed to be using it at all. … Doesn’t matter. Chalabi has his friends in the Pentagon, he’s got his friends in the White House, and he has his friends in the news media. And we go into great detail how these defectors were fed to The New York Times. Judy Miller and other reporters put them on the front page in prominent stories: 'Defector Tells Stories of Underground WMD Facilities in Iraq.'” — Michael Isikoff, co-author of Hubris: The Inside Story of Spin, Scandal, and the Selling of the Iraq War” (9/12/06)

Chalabi, John Rendon & the CIA
“And after the first Gulf War, the whole idea was to oust Saddam Hussein and put in Ahmed Chalabi as the leader. So, John Rendon, his company the Rendon Group, created an umbrella group known as the Iraqi National Congress. … John Rendon came up with the name. He formed an organizational meeting in Vienna. He helped install Chalabi as the head of the group, and then the money was originally funneled from the CIA through the Rendon Group, about $350,000 a month, to Chalabi. … So it was a very convenient organization to turn to in order to help regime change. The CIA could help in terms of the combat, overthrowing a foreign leader like Saddam Hussein, but in terms of building up the world propaganda—number one, hating Saddam Hussein; number two, loving Ahmed Chalabi—that was something that they had to outsource, and the Rendon Group had become specialists in that type of propaganda.” — James Bamford, author of The Man Who Sold the War (11/21/05)

Gore Vidal on Bush & Chalabi
“Bush is about as evil as you can get, in the way of an American president. The fact that he doesn’t know what he’s doing is a mitigating factor. I mean, there are times when I’d say he’s sleepwalking. He says the most absurd things. Our craven media, which is getting a little better now. I don’t know if you enjoy as much as I do, The New York Times's mea culpa. They figured out they have been lying all along, and that Judith Miller, their great inside person about weapons of mass destruction, she was getting it from Chalabi, who was a kind of con man, and they were making it up. It just sounded good. The Times had it on the front page, the weapons of mass destruction. We have to go in there and knock these people around. Well, when you have a press that no longer does its job, you have an uninformed electorate. We have an electorate that really doesn't know what to believe about anything. You can’t blame it on the people. They’re just not told the truth.” — Gore Vidal, author of Imperial America: Reflections on the United States of Amnesia (6/4/04)

StoryJul 01, 2021Demonization of Iran Is a “Mistake” That Has Trapped the U.S. in Perpetual Middle East Conflict

Demonization of Iran Is a “Mistake” That Has Trapped the U.S. in Perpetual Middle East Conflict