While Sergeant Bowe Bergdahl is court-martialed and faces continued Republican-led attacks, a case of deadly abuse and a potential cover-up in the Navy has been met by a wall of official silence. Bergdahl was arraigned this week just days after The New York Times revealed a 2012 incident in Afghanistan when three Navy SEALs abused detainees so badly that one died from his wounds. Four U.S. soldiers reported witnessing the abuse, but Navy commanders chose a closed disciplinary process usually reserved for minor infractions. The SEALs were then cleared of any wrongdoing. We are joined by Rachel VanLandingham, a former top military legal expert who has criticized Bergdahl’s court-martial while calling for the Navy SEAL case to be reopened.

AMY GOODMAN: So, let’s now talk about the Navy SEAL case. Last week, we spoke with New York Times correspondent Nick Kulish, one of the lead reporters in that exposé, the front page of the Sunday Times, “Navy SEALs, a Beating Death and Claims of a Cover-Up.” The investigation looks into a possible cover-up of an incident where members of a Navy SEAL team stationed at an outpost in Kalach, in southern Afghanistan, abused Afghan detainees in 2012. One detainee had been beaten so badly that he later died of his injuries. Democracy Now! co-host Juan González asked Nick why the four Navy SEALs implicated in the case weren’t court-martialed.

NICHOLAS KULISH: I think that’s the biggest question that remains. I think that, you know, the former JAGs that we spoke to, Judge Advocate General Corps military lawyers, all said that the logical next step would have been an Article 32 hearing. That’s similar to a grand jury for the military. I think some people might be familiar with it, because Bowe Bergdahl recently had an Article 32 hearing. But for some reason, that did not take—that did not take place. The Navy captain, Robert E. Smith, said that he believed that conflicting statements between the Naval personnel and the Army soldiers was enough that he should handle it with his own closed hearing.

AMY GOODMAN: New York Times reporter Nick Kulish went on to talk about the lack of transparency in the handling of the case.

NICHOLAS KULISH: In fact, the witnesses did not know what had happened, what the disposition of this case was. They believed that they were testifying at a court-martial, when in fact it was just the—what’s called the captain’s mast procedure. And I think it’s fair to say that they were stunned when they learned that the people involved had been—that the SEALs who they had accused had been promoted. They were absolutely shocked.

AMY GOODMAN: Professor Rachel VanLandingham, you’re not only a professor, but you are a former Air Force military lawyer, for years serving as chief legal adviser for international law at U.S. CENTCOM under Generals Dempsey and Petraeus. Talk about the significance of this Navy SEAL story and what happened to them—or didn’t.

RACHEL VANLANDINGHAM: Well, Amy, first of all, as you know, the vast majority of U.S. servicemembers serve honorably and have nothing to do with this type of criminal activity on the battlefield. And it’s testament to the U.S. military that when criminal activity like this does occur, particularly on the battlefield, that a swift, appropriate action is taken. And that’s what’s most concerning about this case. And it reflects an overall lack of oversight, it—over an accountability for decisions regarding how to handle misconduct in the military, particular decisions regarding battlefield misconduct.

Two years ago, in 2013, the Department of Defense itself, in a high-level panel, recommended that decisions regarding misconduct on the battlefield, disciplinary decisions, should be handled by the combatant commander, the commander in charge of the combat operations, such as someone like General Petraeus, because they saw too often that misbehavior on the battlefield was sent home, was sent back to the respective service, such as the Navy SEALs case here was sent back to the Navy and the SEAL command, to be handled—or, unfortunately, swept under the rug. And that’s what happened here.

What’s even more disconcerting—well, first of all, it’s outstanding that the four Army soldiers here did the right thing despite being afraid of the Navy SEALs, did the right thing and reported the egregious abuse that they witnessed. And one of the Army soldiers had a terrific quote; he said, “You can’t squint hard enough to make this gray.” This was not a gray incident; this was a black-and-white incident of horrific abuse by Navy SEALs against an Afghan detainee, that, according to all the facts that were laid out in the investigation, led to that detainee’s death. War crimes occur on the battlefield. They will always occur, because the battlefield is a horrible place, and human beings sometimes succumb to the temptation on the battlefield. However, the fidelity to the rule of law, the disciplinary action that’s taken after the crime, is what really is a testament to the military. And here, the military failed.

There was significant obstruction of justice in this case. The Navy SEAL commander who originally received reports of this abuse did the right thing. He immediately sent this Navy SEAL team home. This was Commander Hayes. He was in Afghanistan. He sent this Navy SEAL home, back to Norfolk, Virginia, and said—and told the commander there, “You need to take appropriate action. These individuals should no longer be SEALs.” There was a criminal investigation that was conducted that produced overwhelming evidence—four different eyewitnesses just from the Army side, as well as some Navy personnel and Afghans, as well, that witnessed these crimes—more than sufficient evidence to warrant the beginning of criminal prosecution. But instead of that, the Navy commander back home allowed some of his senior enlisted noncommissioned officers to badger and harass these Army soldiers, these Army soldiers that were—one of them was on his fourth combat tour—called these Army soldiers to have a video teleconference, while they were still downrange, months after they had witnessed this incident, and badgered them, and to harass them and pressure them to try to change their story. The fact that that was allowed to happen is beyond the pale, and the Navy absolutely should be looking into this and investigating that obstruction of justice.

Also, they should be looking into why that Navy commander then allowed that separate VTC to be his basis to say, “Well, I really shouldn’t court-martial these individuals. There are some inconsistent statements.” Well, the inconsistent statements were how many times the rock was actually dropped on the detainee’s head. Was it three times? Was it eight times? Yes, those were inconsistencies, but it was clearly an excuse to allow that commander to sweep this under the rug. The only thing that occurred as a consequence of this potential murder, the death of a detainee in U.S. custody, was that a few of the Navy SEALs received a nonpunitive—just a letter of counseling, saying, “Make better decisions downrange next time.”

So, up the chain of command, where was the outcry here? Well, there was no outcry, because there is no formal mechanism for tracking military justice decisions, for looking at them, providing lessons learned and sharing those lessons learned across the services. Amy, there’s supposed to be this Uniform Code of Military Justice, “uniform” meaning it applies to all the separate services. But it’s not uniform. The systems handle the military justice cases often very differently. And there is no systemic-wide tracking and accountability system. Commanders are rarely, if ever, held accountable—never mind not promoted—for decisions they make regarding the initial disposition decision, the decision whether or not to take action in a particular case. And that has to change. And this case really should break open wide that systemic problem. And this is what Congress should be focusing on, instead of calling for a particular outcome in one case, such as—and a pending case, such as Sergeant Bergdahl, they should be performing their oversight role appropriately and looking at the entire system.

AMY GOODMAN: Do you think these Navy SEALs should be charged with murder, Professor VanLandingham?

RACHEL VANLANDINGHAM: Yes, I think they should be charged with manslaughter.

AMY GOODMAN: And is there any possibility, or is the case entirely closed?

RACHEL VANLANDINGHAM: Yeah, well, the case is not closed. These individuals are still on active duty. The statute of limitations has not passed. I think, in addition to abuse and manslaughter charges, there should be obstruction of justice charges brought against the enlisted individuals that were allowed to hold the video teleconference against the witnesses, that—the Army witnesses that stood up and honorably did the right thing here. And there should also be a dereliction of duty investigation and disciplinary action and perhaps a charge against that Navy commander that swept this under the rug.

AMY GOODMAN: And finally, the “kill team,” yet another story, this one in 2009 in Afghanistan, if you could just briefly summarize—we have about a minute—and what should happen with this story, this case, the number of people killed, those who should be held accountable?

RACHEL VANLANDINGHAM: Well, the kill team was an example of the Army doing the right thing—unlike the Navy SEALs in this case—the Army doing the right thing in which it prosecuted, held court-martial, numerous courts-martial for individuals that were involved in not just a killing, but taking souvenirs, war souvenirs, such as fingers off of dead bodies in Afghanistan. When the Army discovered this, these criminal actions, it court-martialed its individuals, and they are now sitting in jail. However, it did nothing for the lack of leadership of that unit that allowed such ill discipline to occur.

AMY GOODMAN: Rachel VanLandingham, I want to thank you for being with us, associate professor of law at Southwestern Law School, 20-year vet of the U.S. Air Force, where she served as a military lawyer. From 2006 to ’10, she served as chief legal adviser for international law to U.S. CENTCOM under Generals Dempsey and Petraeus. Thank you so much for joining us.

AMY GOODMAN: She joined us from Los Angeles.

This is Democracy Now! When we come back, a Democracy Now! exclusive—how one woman’s dream became a man’s nightmare for nearly 30 years. We speak with Clarence Moses-EL, out of prison for just the last, oh, 24 or 30 hours, the first time he’s speaking publicly nationally. Stay with us. 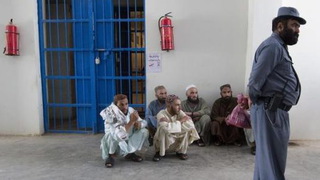 Did the U.S. Cover Up Navy SEALs’ Beating Death of Afghan Detainee & Pattern of Extreme Abuse?