Haskell Wexler Dead at 93: Legendary Cinematographer, Activist Captured the Struggles of Our Times

The legendary cinematographer and director Haskell Wexler has died at the age of 93. Wexler is perhaps best known for his 1969 film, “Medium Cool,” which captures the upheaval surrounding the 1968 Democratic National Convention in Chicago. He won two Academy Awards for cinematography in “Who’s Afraid of Virginia Woolf?” and “Bound for Glory,” about folk singer Woody Guthrie. His documentaries tackled political issues including the Southern Freedom Riders of the 1960s, the U.S. government’s destabilization of Nicaragua, U.S. atrocities in Vietnam, and torture under the U.S.-backed junta in Brazil. We remember Haskell Wexler with Pamela Yates, director of “Rebel Citizen,” a documentary about his life.

AMY GOODMAN: Voices from the March on Washington in 1963, from Haskell Wexler’s 1965 film, The Bus, based on one of those buses that took people to the march. This is Democracy Now!, democracynow.org, The War and Peace Report. I’m Amy Goodman, as we turn now to remembering the legendary filmmaker Haskell Wexler, who died this weekend at the age of 93. One of the nation’s most revered cinematographers, Wexler was perhaps best known for his 1969 film, Medium Cool, which captures the upheaval surrounding the 1968 Democratic National Convention in Chicago. Wexler won two Academy Awards for cinematography in Who’s Afraid of Virginia Woolf? and Bound for Glory, about folk singer Woody Guthrie. Over his six decades of filmmaking, he also received five Oscar nominations and an Emmy.

His documentaries tackled political issues including the Southern Freedom Riders of the '60s, U.S. government's destabilization of Nicaragua by supporting the Contras, U.S. atrocities in Vietnam, torture under the U.S.-backed junta in Brazil. In 2012, Wexler returned to Chicago to make Four Days in Chicago, about anti-NATO protests there. He ended up collaborating with James Foley, the American journalist who would later be executed by the Islamic State in Syria. Haskell Wexler has the rare distinction of receiving a star on the Hollywood Walk of Fame as a cinematographer.

In October, he visited the Democracy Now! studios, and I asked him about the making of his film in 1968 at the Chicago Democratic National Convention, Medium Cool.

HASKELL WEXLER: Then I went home to Chicago, and I realized, from people I know in the progressive movement, that if the Democratic Party didn’t take some stand on the war, there was going to be theater. There would be demonstrations. There was going to be, you know, the kind of thing that would get the attention of the media. And so I wrote a script with Studs Terkel, who reintroduced me to my town, to the Appalachian community, to blacks and so forth, so that when I wrote this script—I went back to shoot the film—I didn’t realize that the—and also, I knew that they were planning—the authorities were planning to suppress whatever demonstration there was. And, in fact, that scene is in Medium Cool, where they act like hippies, you know?

AMY GOODMAN: The legendary filmmaker Haskell Wexler, speaking in October on Democracy Now! I also asked him about his advice for young filmmakers.

HASKELL WEXLER: I shot a film in L.A. called Bus Rider’s Union. And on and off for four years, I rode with people on buses, and I got to know what’s important in their life. I realized that there’s a whole world right there in my own city that was going on. And fortunately, the film was very well received, the Bus Rider’s Union, not in a conventional meaning. But I can’t give any advice to young people, except just don’t arbitrarily take the system to be—to realize that if you want to be an artist, you have to—you have to learn, you have to be in touch. You can’t be—you can’t measure success on just how much money you make or how famous you are.

AMY GOODMAN: We’re joined now by Pamela Yates, director of Rebel Citizen, a documentary about Haskell Wexler’s life, co-founder of Skylight Pictures, currently the creative director of Skylight, a company dedicated to creating documentary films that advance awareness of human rights and the quest for justice.

Pamela, this film you did, Rebel Citizen, goes through Haskell’s life. Can you talk about this 60-year body of work?

PAMELA YATES: Absolutely. You know, Haskell is so well known as a brilliant cinematographer. He had this incredible body of work that was lesser-known. And because one of the favorite things that we would do together was talk about politics, argue about politics, debate politics, I wanted to continue the conversation that we had had over 30 years and make it into a feature-length film called Rebel Citizen that would highlight his incredible body of work as a politically engaged documentary filmmaker. And, you know, it’s funny, because he’s such a force of nature, we never thought he would actually die. He was superhuman to so many of his colleagues and friends and those of us that he mentored. And yet, now we really must celebrate a life well lived, a life of struggle, and so much of his political activity and struggle was carried out through his creation of this body of work as a documentary film director.

AMY GOODMAN: So talk about what was so unusual about Haskell Wexler—for example, how he filmed Medium Cool about the protests outside the DNC. It was both fiction and documentary all combined.

PAMELA YATES: Yeah, he really opened the door to this kind of hybrid filmmaking, which has now gained so much traction and is one of the most interesting spaces that documentary filmmakers are working in. But I think what was really extraordinary was that he was a consummate artist. So he was able to have one foot in the world of Hollywood, and understand how to create and evolve and influence the artistry of filmmaking, as well as to have one foot in the world of activist politics and bring his artistry into that world, to activate that world, to tell compelling stories, to help people be out into the street. I know this is one of the most interesting moments for him in American history right now, when there’s an electoral season going on—he was very involved in electoral politics—and where people in the streets are in the streets, especially around the Black Lives Matter movement. He was very active up until the day he died.

AMY GOODMAN: I wanted to go to a clip of Medium Cool from ’69.

CHICAGO ACTIVIST: When you come in here and you say you’ve come to do something of human interest, it makes a person wonder whether you’re going to do something of interest to other humans or whether you consider the person human in whom you’re interested. And you have to understand that, too. You can’t just walk in out of your arrogance and expect things to be like they are, because when you walked in, you brought LaSalle Street with you, City Hall, and all the mass communications media. And you are the exploiters. You’re the ones who distort and ridicule and emasculate us. And that ain’t cool.

AMY GOODMAN: Pamela Yates, that was a clip from Medium Cool. Your final comment? And then we’ll do a post-show, and we’ll post it online.

PAMELA YATES: OK. Well, you know, that’s something that someone could be saying right now, here and today, about how the mainstream media covers movements that are happening all around us and in the street. Haskell was a fierce critic of the mainstream media. And so many of his documentary films are skeptical of what is the political line that we’re being taught through mainstream media, and he wanted to have an alternative to that.

AMY GOODMAN: Pamela Yates, we’re going to continue this conversation and post it at democracynow.org. Pam Yates is the director of the documentary Rebel Citizen, about the life of renowned cinematographer Haskell Wexler. 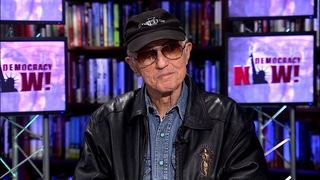