What Was Netanyahu Thinking? Criticism Swirls over Pre-Election Speech to U.S. Congress on Iran

Controversy is mounting around Prime Minister Benjamin Netanyahu’s planned address to the U.S. Congress next month about Iran ahead of Israel’s election. Reuters is reporting Israeli officials are now considering whether Netanyahu should speak to a closed-door session of Congress, rather than in a prime-time television speech. Netanyahu was invited by Republican House Speaker John Boehner. President Obama has said he will not meet with Netanyahu so close to Israel’s election. We get analysis from retired Air Force general Charles Wald, the former deputy commander of U.S. European Command, and University of Chicago professor John Mearsheimer, author of “The Israel Lobby and U.S. Foreign Policy.”

AMY GOODMAN: You know, we only have a minute to go, but since you both are also—have spoken out on the issue of Iran and Israel, I wanted to ask you about this controversy around the Israeli Prime Minister Benjamin Netanyahu’s planned address to the U.S. Congress next month about Iran, ahead of Israel’s election. Reuters is now reporting Israeli officials are considering whether Netanyahu should speak to a closed-door session of Congress rather than in a prime-time TV address. Netanyahu was invited by House Speaker John Boehner. President Obama said he will not meet with Netanyahu so close to Israel’s election. Netanyahu against the U.S. nuclear deal, of course. President Obama is for it; Netanyahu is against it. General Wald, first, your position on this?

JOHN MEARSHEIMER: Well, I think that Prime Minister Netanyahu is between a rock and a hard place. He made a really big mistake agreeing to come to Washington to give this talk without consulting with the White House and without consulting with the Democratic leadership in Congress. And there’s been a huge uproar, and it’s having negative consequences for U.S.-Israeli relations and for the prime minister himself. So there are powerful incentives, I think, reflected in the general’s comments, not to come. But at the same time, if he were to back down, he would end up looking like he had egg all over his face. So I think no matter what he does, he loses. And the simple question is: What’s the least bad alternative? And what they’re trying to do now is find that alternative by finessing the situation, maybe having a closed-door session or having him talk before the annual AIPAC conference. But this is a real mess, and Netanyahu bears principal responsibility for allowing himself to get into this situation.

AMY GOODMAN: We want to thank you both for being with us, John Mearsheimer, professor of political science at the University of Chicago, author of The Tragedy of Great Power Politics, his most recent piece, an op-ed piece in The New York Times, “Don’t Arm Ukraine.” And thanks also to General Charles Wald, retired four-star Air Force general and the former deputy commander of U.S. European Command, co-author of this new report, “Preserving Ukraine’s Independence, Resisting Russian Aggression: What the United States and NATO Must Do.”

This is Democracy Now! When we come back, we’ll be talking about Ferguson. It’s the six-month anniversary of the death of, well, in Ferguson, Mike Brown. Stay with us. 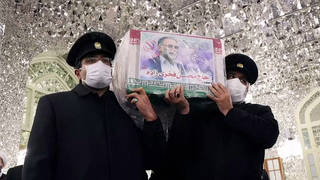